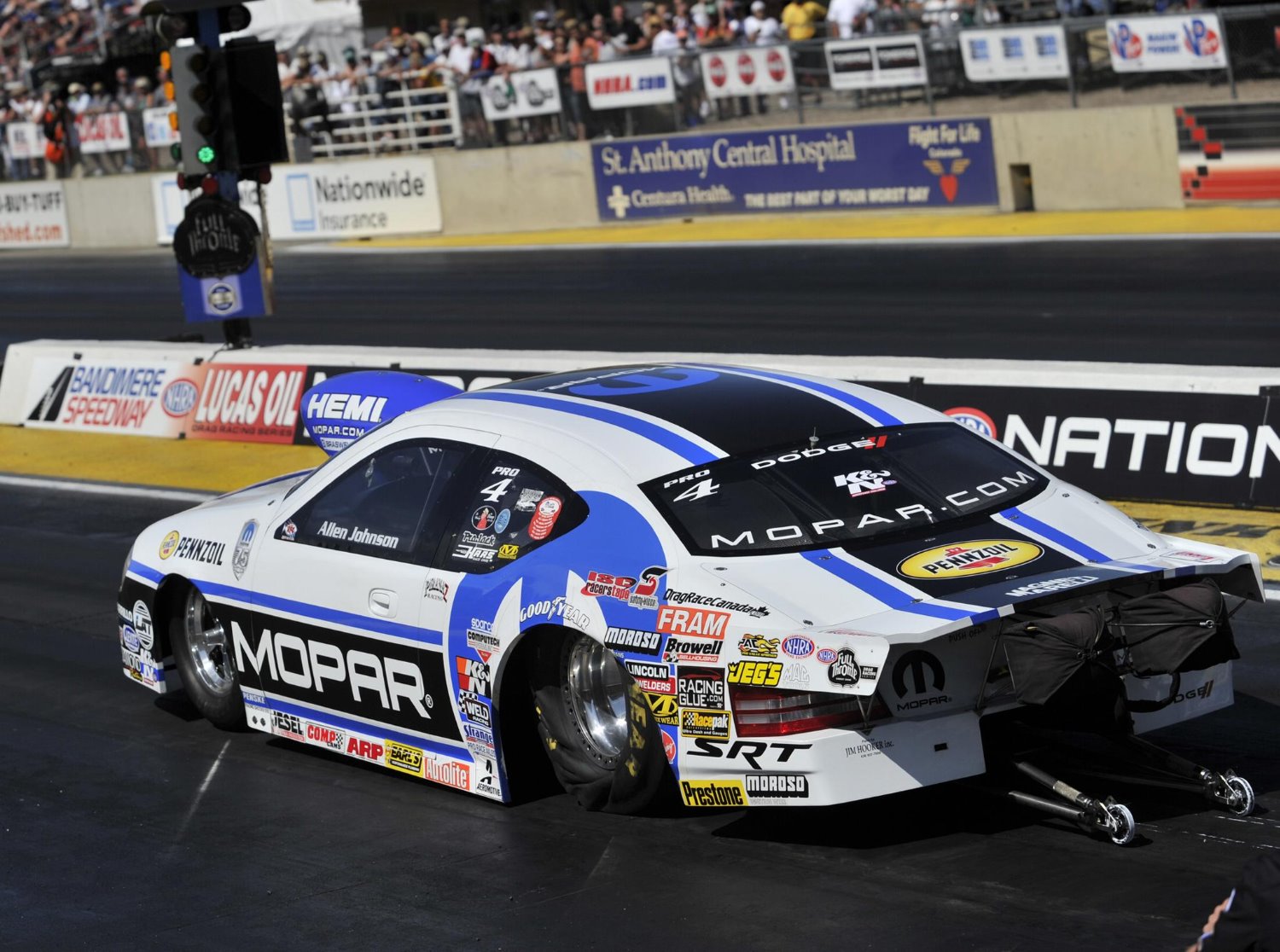 Allen Johnson raced to a Pro Stock track record run in the final qualifying session to take his seventh No. 1 qualifying position of the season Saturday at the Mopar Mile-High NHRA Nationals at scenic Bandimere Speedway.

Johnson powered his Team Mopar Dodge Avenger to a performance of 6.951 seconds at 198.29 mph to take the 25th No. 1 qualifying effort of his career and fourth at the Denver track.

“It was really something to come here this weekend and make our best run [in the last qualifying session] while we were just trying to get ready for tomorrow," said Johnson, who by qualifying for the race secured his spot in the Full Throttle Countdown to the Championship, NHRA’s playoffs.

Johnson, who has won twice this season, will meet Paul Pittman in the first round of eliminations. Johnson will try to continue his impressive streak at Thunder Mountain, where he has advanced to the last five final rounds at this event, winning three times.

“Tomorrow’s conditions should be just about what we had today," Johnson said. “And actually, that last run wasn’t perfect. Maybe we can pick up another hundredth. That’s what we thought we could do coming here after our testing, separate ourselves from the rest of the field by two or three hundredths or so, and I think we did that on that run. I want to give that Wally to the Mopar folks for the Mopar 75th anniversary."

Top Fuel points leader Massey earned his second No. 1 qualifying position of the season and fifth of his career with his Friday performance of 3.914 at 318.02 in his FRAM/Prestone dragster.

“The track was hot today, and obviously everyone was struggling," Massey said. “I was surprised when we ran a 3.91 in the first session, and I was surprised again when it held on for number one. We’re going to stick with our philosophy that we had since last year by trying to run down the racetrack and not beat ourselves tomorrow."

Massey will face journeyman racer Steve Chrisman in the first round as he tries to win his second consecutive title at this event and fifth race of the season. Massey could also become the first Top Fuel driver to clinch a spot in the Countdown if he can advance past Bob Vandergriff and Clay Millican in eliminations.

Antron Brown qualified second in his Matco Tools dragster and was followed by Doug Kalitta, Terry McMillen and Brandon Bernstein in the top five.

In Funny Car, Beckman secured his first No. 1 qualifying position of the season in his Valvoline NextGen Dodge Charger with a run of 4.131 at 304.05. It was the fifth No. 1 of his career and first at this track.

Beckman, who has one win in two career finals in Denver, will meet Todd Simpson in the first round as he continues to try and improve on his points position for the Countdown.

Robert Hight qualified second and in the process became the first Funny Car driver to clinch a Countdown playoff berth. Ron Capps was third and was followed by veteran racers Cruz Pedregon and John Force, the defending event winner.

Hector Arana Jr. rode his Lucas Oil Buell to the No. 1 qualifying position in Pro Stock Motorcycle with a run of 7.238 at 184.57 mph. It was his first top qualifying effort of the season and eighth of his career.