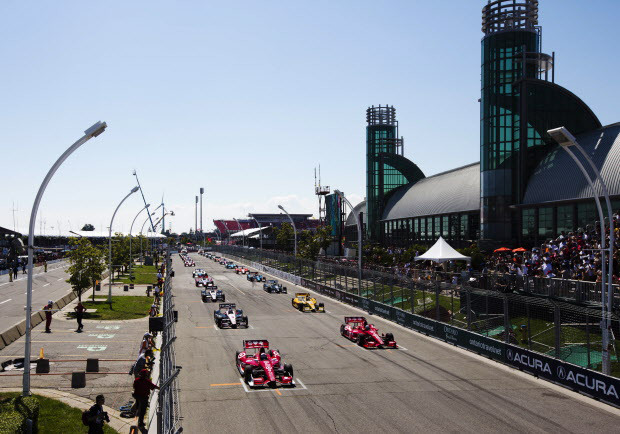 UPDATE #4 We heard the last weekend in June next year for the Toronto IndyCar race this past weekend in the Mid-Ohio paddock, but our sources in Toronto say the first week in June (June 5-6-7) is what the city of Toronto wants. That would come one week after Detroit on May 29-30-31.

08/01/14 We're hearing here in Mid-Ohio the weekend that the last weekend of June next year for the Honda GP of Toronto.

07/31/14 A reader asks, Dear AR1.com, Why doesn't IndyCar wake up and move the Toronto race from that terrible street circuit and put it at Mosport or what is called now Canadian Tire Motorsport Circuit where the race belongs. They would have a 100,000 fans there and could have a doubleheader weekend. If they can race at Mid-Ohio and Elkhart Lake they sure in hell can race at Mosport. Wake up IndyCar and do the right thing. Bert Walsh

Dear Bert, We were told there are government tax incentives for businesses that create jobs inside the greenbelt around Toronto. And race promoter Kim Green to me the race would never move from its downtown location. They just need to get around next year's scheduling dilemma. Mark C.

Editor's note: The following Toronto Sun article by Dean McNulty was written after the Honda Indy Toronto two weeks ago. However, it is a very good breakdown of the logistical hurdles in place for a potential IndyCar race in Toronto in 2015. Further, McNulty notes that a change in local government could result in the municipality not chipping in an estimated $2 million annually in support of the race. Yes, according to McNulty another once glorious Indy car event may be set to join very crowded ash heap of failed Indy car events.

For more detail on the very unfortunate history of failed IndyCar events, see this article by AR1's Brian Carroccio from last September. In the meantime, here is McNulty's article talking about the future of Toronto.

And it says here that is not a slam dunk by any stretch of the imagination.

We can thank the folks who — after all is said and done deserve to be indicted — had the bright idea of bringing the Pan Am Games to Toronto.

What are the Pan Am Games, you might ask? Well, you and about five million other citizens of the GTA are asking the same question.

But to motorsports fans, all you need to know is that all of July next year in Toronto will be taken up by sporting events no one will watch, but will cost in the vicinity of a billion dollars — your dollars, by the way.

It will wipe out the traditional July dates for the Honda Indy.

August, because of the imminent arrival of the Canadian National Exhibition, is also off the table.

May, of course, belongs to Indianapolis as far as the IndyCar series is concerned, so that leaves only June to stage next season’s Honda Indy.

I spoke to Honda Indy boss Charlie Johnstone about this possible dilemma and he said negotiations for a June date are ongoing with IndyCar officials.

Now we know IndyCar is not going to move the Detroit Grand Prix at Belle Isle because that is Roger Penske’s baby and he has more influence than any other owner/promoter in the series.

In May of 2012, INDYCAR and Green Savoree Promotions LLC agreed to a three-year extension signed for the Honda Indy Toronto continue through 2014. At this juncture, no agreement has been reached for after this weekend's race.

Perhaps, complicating matters more is the Toronto will host the Pan Am Games from July 10-26, 2015. The traditional IndyCar weekend would be July 17-19 next year, and that will almost certainly not be an option.

Hard to say. But clearly the future of the very successful Indy car event in The Great White North will be on everyone's mind over the weekend.