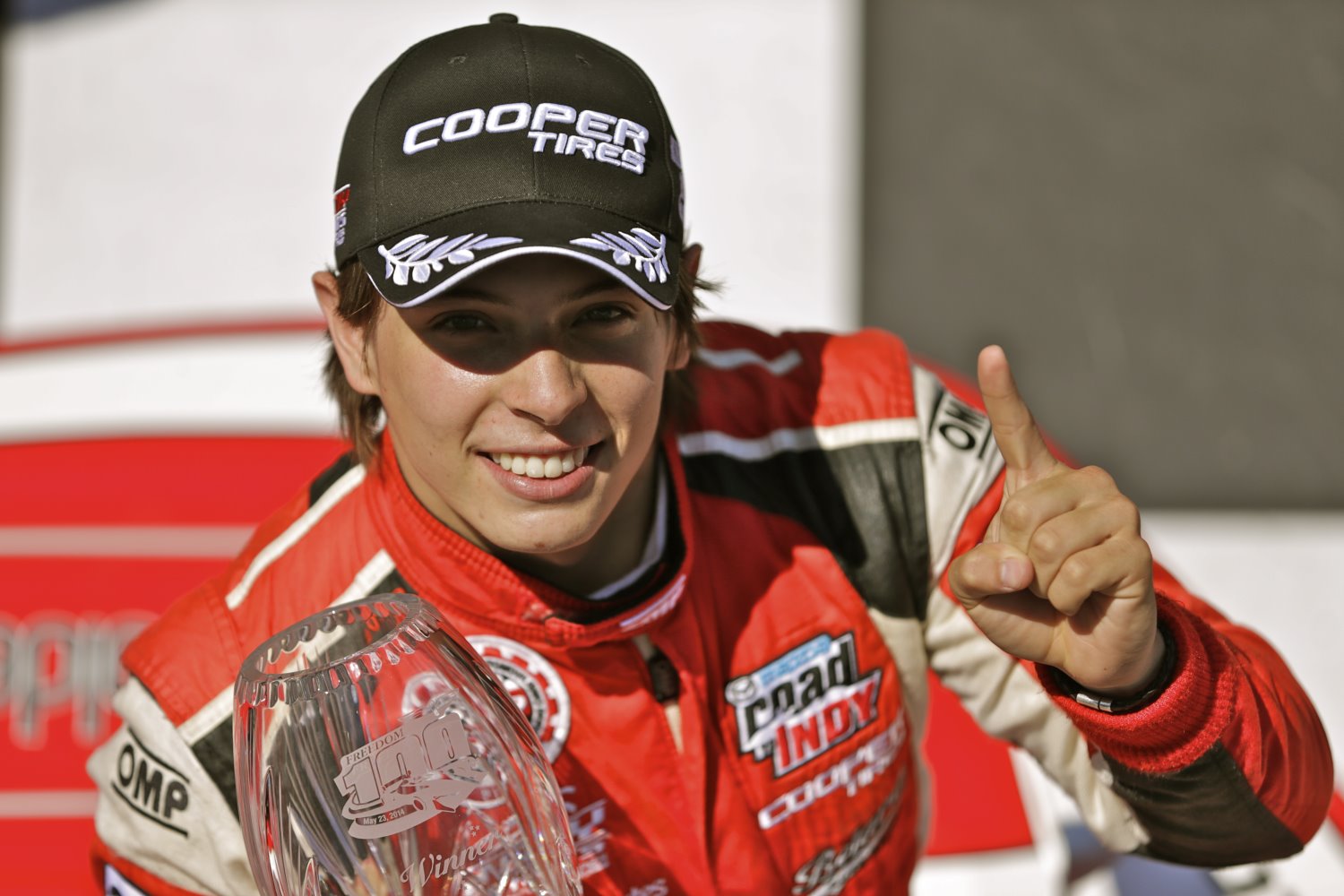 UPDATE #2 Correction, Jack Hawksworth was not cleared to drive as reported below. In fact he is still in the hospital on Sunday afternoon.

It's about 3:45 p.m. ET here at Pocono Raceway. The Indy Lights Presented by Cooper Tires Series race is about to begin. Belardi Auto Racing's Gabby Chaves is on pole.

Unfortunately, there are only 8 starters in today's Pocono Indy Lights 100, which is far from an ideal scenario on a 2.5-mile track. Verizon IndyCar Series qualifying will begin at 5 p.m. ET.

Also, keep in mind that the Lights race is the only 1 scheduled for today. Yes, the paying customer at Pocono today will get IndyCar qualifying, a few practice sessions and an Indy Lights race with 8 cars on a 2.5-mile track. Tomorrow, there is only the IndyCar race. And Pocono Raceway CEO Brandon Igdalsky wonders why ticket sales aren't very good?

Maybe, a consideration for Igdalsky and IndyCar (if they want the event to continue the event) would be to provide the race fans with a little more content.

Of course, Pocono Raceway does have an infield road course, which reportedly has 20-plus potential configurations. I asked IndyCar president of competition and operations Derrick Walker if it would be possible to have a road race of some kind along with the oval races on the same weekend at a track like Pocono. The thought being that a series like U.S. F2000, which couldn't run the oval, could run the road course on the same weekend as the big cars and others was running the road course. My question for Walker, was how would this work logistically.

Walker's response was that the logistics would probably not be an issue, and he agreed that it could possibly help attendance. He said that such a scenario would "depend on what the promoter wants."

Anyway, maybe this is an idea for INDYCAR and Pocono to look at.

Another note I've gathered talking from a few of IndyCar's diehard fans in the paddock, is that whether it was intended or not, they took Igdalsky's comments very personally. Igdalsky, of course, asked where the fans were, and while he may have been attacking the series, his comments put the paying customer into the crossfire. And a number of them are not pleased about it.

Moving on, I caught up with Dale Coyne right before Practice 2. I asked Coyne if Pippa Mann would potentially run again for the team this season. Coyne said Fontana was a possibility, but did not seem to rate it as a likely scenario.

He then added, "Pippa and I are talking about something for next year." When I asked if it would be a part time or full-time deal, Coyne smiled and said "you never know."

I forget to mention earlier that KV/AFS Racing's Sebastian Saavedra mileaged out his Chevrolet engine during practice 1 and had a new engine put in before practice 2. Apparently, a number of drivers spent P2 mileaging out their engines, but we have yet to receive an official list.

Rookie Jack Hawksworth driver of the #98 Integrity Energee Drink Honda was checked, released and cleared to drive after an accident in P2.

I spent a little time near the Schmidt Peterson Motorsports garage earlier today. I'll just say that coming off last week's one-two finish in Race 2 at Houston, that appears to be one very confident team right now. And although Russian rookie Mikhail Aleshin had never seen Pocono Raceway until this weekend, he was 8th in practice 1 and 6th in practice 2.

Last, if you want a dark horse for the weekend, consider rookie Carlos Munoz. The Colombian was 6th quick in opening practice and second quick in the afternoon. He seems quite comfortable here, and could challenge for both the pole and race victory.

07/05/14 Nice weather here at Pocono on Saturday but very windy which is pushing the cars around a lot making the drivers have to earn their salary. It's called the Tricky Triangle and the wind has made it even trickier today. Qualifying could be a crap shoot.

The Andretti team appears to have fast cars with their Honda power, but it's early yet. Last year Marco Andretti was easily fastest but poor fuel mileage was his undoing, but last year he had Chevy power and this year Honda, so we'll see. This race really needs Marco Andretti to win the pole again. The Andretti name is magical here at Pocono. if they want a big walkup crowd IndyCar and Pocono had better hope Marco does it.

His teammate Ryan Hunter-Reay had a water leak before practice and lost 20 min. He said the car is really moving around a lot, especially in Turn 3 where there is a cross wind and turn 1 where it is a cross wind from the other side of the car. The team was fast at Indy and they are 2-3-4 after morning practice. We asked him how much of the setup transfers from Indy to here given they are fast at both tracks. "Not much he said."

And you have to be on the banking in Turn 1. If you hit the apron with the left wheels there is a good chance you're going into the outside wall.

The race really needs a sponsor to help it survive. If the race was on ABC they might have one, but not on NBCSN, not enough people watching. And when is IndyCar going to wake up? Sage Karam is also from Nazareth. Why is he not in a car this weekend? Hello!

We hear that ticket sales are down a lot from last year because many fans did not renew their tickets. Why? Because there is not a lot of racing going on this weekend. It's boring for the fans with a lot of down time. So are you surprised they did not renew?

Recall the rumor that Fuzzy's had a change of CEO and there was some doubt whether they would return to sponsor Ed Carpenter Racing. Well rumor has it that the guy who owns Fuzzy's, whose name shall remain anonymous by request, is from Indy and is a big Ed Carpenter and Indy 500 fan. He really wants to win the Indy 500. Given he owns Fuzzy's it does not matter who the CEO is. The wealthy businessman calls the shots. BTW, he also owns 25 other companies.

JR Hildebrand is here, still trying to work deals for more races. A rumor in the paddock is one reason JR did not have good results with Panther Racing, and crashed twice at Indy, is because he did not have much say in car setups. This is an unconfirmed rumor.

The Carpenter team did a lot of PR work ahead of this race, visiting the NY Stock Exchange on CNBC, Good Day on Friday, FOX and USA Today.

Did you know that the rear wing on the Dale Coyne car of Huertas at Houston was only out 20/1000ths of an inch, not deemed enough to give the car a performance advantage. There is also a question in the paddock about how accurate IndyCar’s measurement techniques are.

A piece of paper is about 9/1000ths thick so 20/1000ths is slightly more than two pieces of paper. Unless IndyCar is using a laser system to measure the car (they are not) they know they can't be too hard on a team if the car is close. Hence why Huertas was not stripped of his win and the team received a nominal fine.