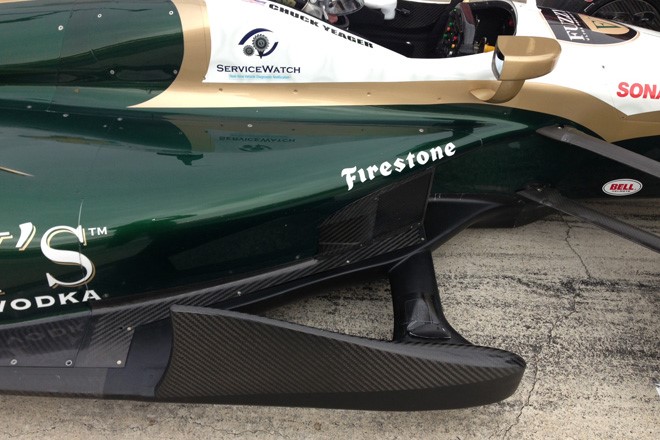 In a story first broke by AR1.com back in May, leave it up to IndyCar to take away the area of the new body kits that could have radically changed the look of the cars. They put a hole in the floor of the car just in the area of the undertray that currently has no bodywork above it. It is in this area that most of the changes to the look of the car were to be. But now there can be no development in this area because of the hole.

Instead of reducing downforce by making the exit of the tunnels at the back smaller, they are going to put a hole in the undertray. A simple $100 insert reducing the area of the tunnel exits would have the same effect.

The reduced downforce of the undertray is necessary because the new aero kits by Chevy and Honda will produce more downforce and IndyCar does not want the cars to have too much downforce. God forbid if they broke the track record everywhere they went. More downforce will make the cars harder to steer because they have no power steering. The drivers would have to man-up.

IndyCar released the graphic below that shows what body parts (in red) can be modified by the manufacturers. According to AR1.com sources, we hear IndyCar has been doing a lot of aero testing recently. Rumor has it that IndyCar has twice tested a hole in the undertray (see illustration to right) to allow air to flow through in case the car gets up in the air 5 degrees or more.

As it is now, the huge undertray acts like a sail and the car flies so the idea is to let the air flow through. We hear both Marco Andretti (Indy Speedway) and Ed Carpenter (Fontana) have tested it and we hear it really messed up the handling of the car so this idea may be dead on arrival.