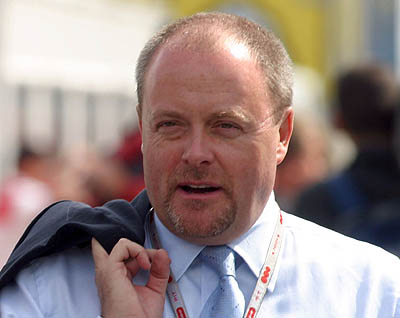 UPDATE #4 In Texas yesterday Mark Miles said IndyCar is getting closer to securing two international races for its 2015 schedule. If a deal comes together with officials in Dubai, the Verizon IndyCar Series will race there in early February and in Brazil in early March as we reported many times now. Miles has targeted international races as a way to increase revenue for the sport. The cash influx will flow to the teams, he said. A deal with Dubai isn't done, Miles said, but he described talks as "ongoing, positive conversations." The race in Brasilia, the federal capital of Brazil, will be March 8. A formal announcement is expected in the next couple of weeks. That's funny because in Brazil they announced the race months ago and was reported here on AR1.com.

06/03/14 America’s premier open-wheel racing series, IndyCar, is considering adding races outside North America to the calendar, according to C.J. O’Donnell, chief marketing officer of IndyCar. O’Donnell told SBD Global at the Indy 500 that nothing has been set in stone and all options are still on the table. Media reports have suggested that the series is looking to add off-season races around the globe. But O’Donnell also did not rule out the addition of int’l races to the current schedule. "We are always looking for ways to make the series more attractive and potential races outside of North America seem to be one way to accomplish it," he said. The majority of teams support the push for an increased number of int’l races. However, O’Donnell added that concerns in terms of increased logistics costs have to be sorted out before any real progress can be made in the area. A team that would certainly profit from races outside North America is Chip Ganassi Racing. The team's driver lineup consists of New Zealand native Scott Dixon, Brazilian Tony Kanaan, Australian Ryan Briscoe and British-born Charlie Kimball. "[Int’l races provide] something added on, which is going to help deliver more value to our partners," said Steve Lauletta, president of CGR. Analysis based on social media activity showed that IndyCar has a substantial following in countries such as Brazil and Colombia. In the past, the series has held races in Brazil and Japan.

A LONG WAY TO THE TOP: While int’l races might increase the series' global appeal and provide new revenue streams for the teams, they are just part of IndyCar's greater strategic plan of becoming the No. 1 motorsports competition in the U.S. O’Donnell said that the biggest difficulty in achieving this goal is finding the right partners and race promoters to put on IndyCar races year after year. He compared negotiations between the series and race promoters to a car purchase at a dealership. "The difference is that negotiations take more than 10 minutes and the result is not always satisfying to either side," he said. IndyCar welcomes other int’l racing series such as F1, which is pushing for a second U.S. race, and the new all-electric Formula E, which will debut in September and includes two U.S. races, to its home turf and sees them as assets rather than obstacles to its growth and expansion plans. "More events are great for fans and help all forms of motorsports here in the U.S. to increase in popularity," O’Donnell said. This year’s IndyCar schedule features only two races outside of the U.S. — both will take place in Toronto. HJ Mai, Sportsbusinessdaily.com

We remember when certain IndyCar teams repeatedly said IndyCar should focus on domestic races, that their sponsor budgets were North American based and they did not want to spend money on sponsoring a car that would be racing outside the USA. We argued that 1) the sponsor logos were just as visible on TV, regardless of where the race was broadcast from. We also argued that 2) NASCAR was a monopoly in the USA now and hence IndyCar would find it difficult grow in this market, and 3) there are so many forms of motorsports in the USA that the fan base is too diluted, another reason why IndyCar would not be able to grow in the USA. These teams had joined the dark side and were feeding from the Tony George money trough with the intent to kill off CART, the most successful IndyCar series in history. Now these teams think they should race overseas as a way to grow (like CART and Champ Car were already doing) after they took a hard stance against their international aspirations before? Crazy!

We met Alan Donnelly on the grid in Indianapolis talking to Kevin Kalkhoven and he told AR1.com that access to drivers and cars by the fans was so much better than in F1. He was very impressed with the Indy 500. Rumor has it that one of the Middle East IndyCar races will be a street race, possibly in Dubai. We should be hearing something more in the not too distant future. The plan is to start racing in the Middle East the first week after the Super Bowl, run two or more overseas event and then be back in the USA in time for St. Petersburg, Florida on March 27-29. There is a six week window to run up to four races before St. Pete, but we suspect they will start with two.

01/10/14 We did a little more digging on this rumor and uncovered these facts. Bernie did not put Alan Donnelly in touch with Mark Miles, it was someone else and it was well before the Austin F1 race. In fact we are told there is no real love lost between Bernie and Donnelly, so it's almost certain that Bernie is not using Donnelly to play Miles or IndyCar. In fact we are told Miles has yet to meet Donnelly and it is John Hall (of the same company – Sovereign Strategy) that has been working with Miles.

We have learned that Miles is doing his due diligence because he does not want a repeat of the failed China and Brazil races. In fact, the Donnelly group is trying to put together two or more races in the Middle East for IndyCar while this other group has a four-race package in Africa and South America. The Africa and South American races would run in the fall each year and the Middle East races in the Winter after New Years (January and February). Mark C.

01/10/14 Time is running out for IndyCar to sign deals to put on a series of overseas races in the off-season, dubbed a 'Winter Series' slated to start this fall and run into the winter.

According AR1.com sources, IndyCar CEO Mark Miles went to the Austin F1 race and bumped into Bernie Ecclestone. From what we hear, they talked about Miles' idea of having some overseas races during the off-season and Bernie said, "I have just the guy for you."

Donnelly was first elected to the European Parliament in 1989 but later resigned. Donnelly has worked closely with Bernie Ecclestone and Max Mosley, becoming chief race steward in 2007-09. He was recently elected to the board of Cosworth.

Knowing Bernie, he absolutely does not want IndyCar doing overseas races and establishing the series as a lower cost alternative to F1. So Donnelly could easily tie deals up in red tape and delay them so long they never happen. In other words the shrewd Bernie may be playing Miles like a fiddle

. While this is all conjecture on our part, we do know that Bernie protects F1 anyway he can. Would he use Donnelly to keep IndyCar out of the international arena? Who knows, and in fact there may be no such intention. We'll leave it up to you to decide.

Meanwhile other AR1.com sources tell us that an American race promoter that IndyCar knows, has a package of four races in Africa and South America ready to go. However, that deal is being held up for unknown reasons. Hmm…… When we say ready to go we mean, the deals are ready to sign with the race promoters, national and international TV deals, etc that would see each IndyCar team get $150K for their trouble, plus a sanctioning fee to IndyCar of between $1 million and $2 million per race, plus all transportation costs of personnel and equipment covered.

So…….as we see it, will Miles do a deal with the package on the table via the American race promoter, or will Miles wait for Alan Donnelly to put deals together that allows Bernie to keep his thumb on IndyCar to ensure nothing jeopardizes F1.

With time running out to announce something in time for this fall, we expect we'll get wind of some movement, either way, before long. Mark C. reporting for AutoRacing1.com