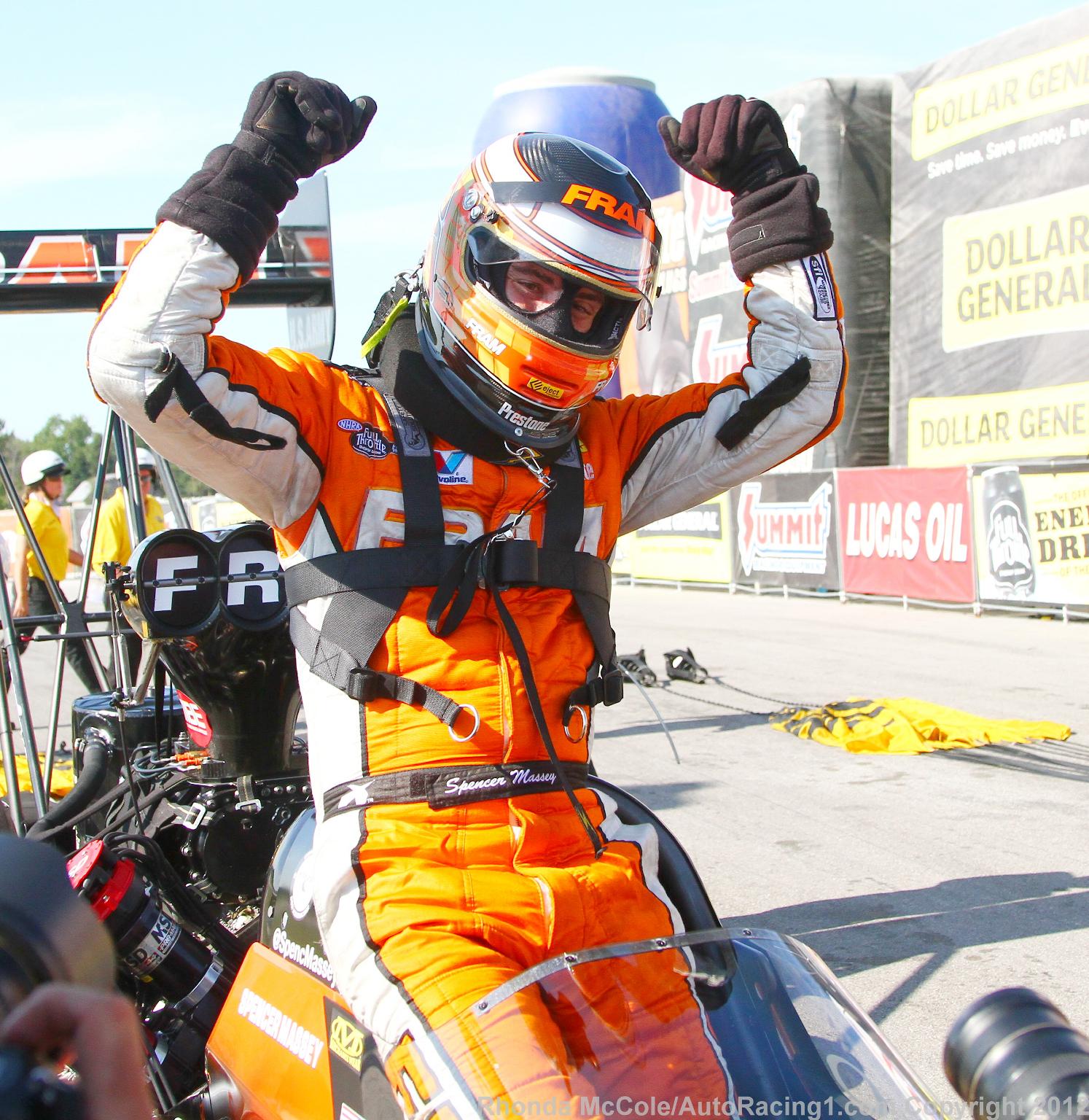 Massey notched his fourth win of the season in Top Fuel with a holeshot victory over Steve Torrence while Vincent Nobile earned a clean sweep of the Pro Stock division after winning Saturday’s $50,000 K&N Horsepower Challenge, pocketing an additional $50,000 bonus.

Massey came into Sunday’s eliminations as the seventh qualifier and knocked off Shawn Langdon, Antron Brown and David Grubnic for a first-time final round meeting with Torrence, who entered as the no. 1 qualifier and advanced past Brandon Bernstein, Keith Hurt and Top Fuel points leader Tony Schumacher to reach his fourth final round in the last six events.

In Funny Car it was a face-off of past winners, as defending event winner Mike Neff took down 2010 event winner Tim Wilkerson to record his second win of the season.

Neff took round wins over Bob Bode, Jeff Arend and Cruz Pedregon to make his 19th-career final round appearance and his third against Wilkerson, who was making his first trip to the final round this season after eliminating John Force, points leader Robert Hight and Bob Tasca III.

“I don’t know how it all works, but Norwalk has definitely been good to me," Neff said. "We’ve done fairly well on the hotter racetracks. We usually do pretty well on those. And sometimes it just seems like you go some places that you just always do well at, and then there are some tracks you go to and it just seems like you can never do any good no matter how you’ve been doing up to that point. Tim Wilkerson put up a heck of a run over there. It had to be very close at the finish line, so it was just our day."

After taking down Warren Johnson, V. Gaines and top qualifier Allen Johnson, Nobile found himself facing Line yet again, this time with the event win and bonus money on the line.

Line, who topped Rodger Brogdon, Jeg Coughlin and Shane Gray to reach his 60th-career final round, hit a 0.010 light at the start of the final round to edge out to a slight lead, but quickly drifted to the right and had to get back on centerline, giving Nobile just enough of an edge to take the win, going 6.661 seconds at 208.01 mph for his second win of the season.

“I never thought in a million years that things would be going like this," said Nobile. "My team supplied me with the fastest car today, and I have to give them the credit. The best part of the weekend was getting Peggy [Coleman], my partner in the K&N Horsepower Challenge, that Toyota Tundra. She was in a terrible situation where she lost her house, and it was great to give something back to her."

In Pro Stock Motorcycle, top qualifier Andrew Hines tallied his third victory of the season with a win over Hector Arana, Jr.

After defeating Mike Berry Steve Johnson and teammate Eddie Krawiec to move on the 47th money round of his career, Hines jumped to an early lead in the final round and never looked back, going 6.929 at 193.43 mph to become the first three-time winner of the event.

“It was a good weekend all around for our team," said Hines. “We learned a lot against Eddie [Krawiec] in the semifinals, and luckily I was able to get the eight-thou win against Eddie in the semifinals and learned everything we possibly could and applied that to the final. That was our best speed of the weekend and our best ET of the weekend. It was a heck of a race with Hector Jr. I beat him on a holeshot in Houston, and that was huge, and to do it again is ‘ice cream’ on the cake."