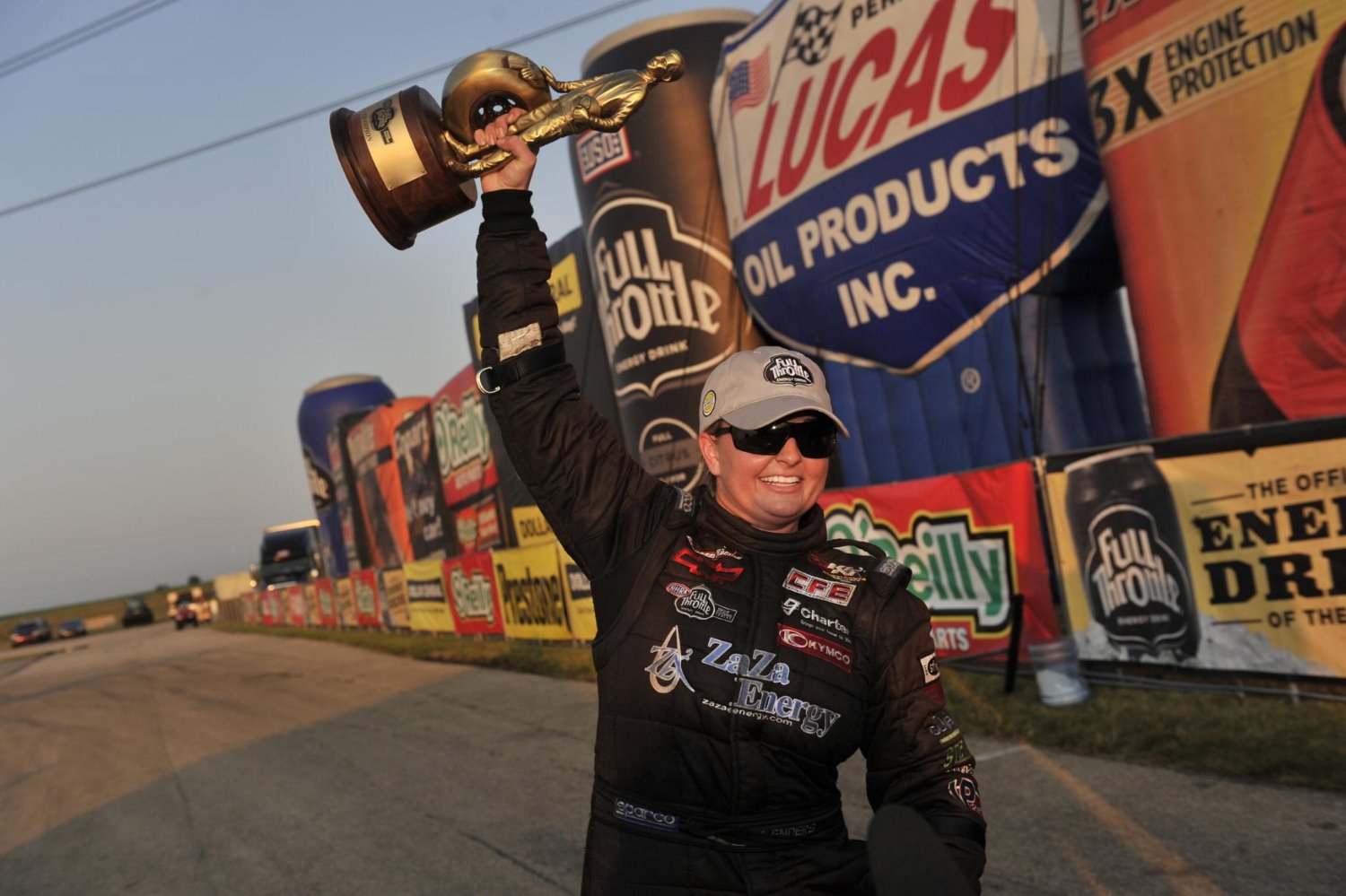 Enders drove her GK Motorsports Chevy Cobalt to a final round winning performance of 6.627 seconds at 207.40 mph to hold off four-time world champion Greg Anderson, who trailed in the race in his Summit Racing Chevy Camaro with a 6.641 at 208.36.

Enders, one of only six females to ever compete in the 200-mph factory hot rod category, raced past Kurt Johnson, Vincent Nobile and V. Gaines in the first three rounds to advance to her seventh career final round. From there the 28-year-old Houston native led season points leader Anderson all the way down the track in the final round to finally get the victory she has been seeking since starting her Pro Stock career in 2005.

“It’s awesome," said Enders, who becomes the 12th female to win an NHRA pro category race. “I think that if I could have planned it, I would have asked to run Greg in the final. You know that he made it very clear that he didn’t want to lose to me. He’s a very competitive guy and I love him to death, but I couldn’t wait to beat him. I’m glad [the win] came here in Chicago. I had my first final in Pro Stock here in 2005, and so it was nice to circle back around and get it done here.

“Pro Stock is tough. It will humble you in an instant. When you think you’ve got it figured out, you go to Bristol and blow all your [engines] up. I can’t say enough about my guys (crew). They’re amazing and I love them."

In Top Fuel, Brown raced to his second victory of the season behind the wheel of his Matco Tools dragster when final round opponent Steve Torrence fouled at the start in his Capco Contractors dragster. It was Brown’s 33rd career victory and his third win at this track, as he claimed two wins here in Pro Stock Motorcycle.

“It doesn’t get better than this," Brown said. “Coming here to Route 66 Raceway is always special and goes beyond words because our team owner Don [Schumacher] will be inducted into the International Motorsports Hall of Fame, and what he’s done for the sport and our teams is amazing. Right now you look at Top Fuel and see how competitive that the class is. It’s as tight as Pro Stock car. We’re running e.t.s that are neck and neck, winning by 12 inches or less at over 320 mph."

With the win, Brown moved to second in the points standings, behind series leader Tony Schumacher, the event’s No. 1 qualifier who was upset in the first round. Brown outran Morgan Lucas, David Grubnic and Shawn Langdon to advance to the final round.

“When you get a race win now with the competition that we have to go through, it’s just remarkable," Brown said. “The team is doing a great job, and it’s all worth it. The blood, the sweat, and the tears. The heat was like a sauna, I mean I’m 10 pounds lighter than I was on Wednesday. It just feels good to knock one out of the park again. To gain some points and get it done. Because the Countdown is right around the corner. We have just six races left. So we have to get some momentum going for the Western Swing, Indy, and the Countdown. It’s crucial right now, and we’re going to have some hot races in the countdown."

Veteran driver Arend claimed his first Funny Car win of the season and fourth of his career by defeating rookie Courtney Force in the final round. Arend powered to a performance of 4.131 at 309.20 in his DHL Toyota Camry to hold off the 24-year-old Force, who finished in 4.454 at 272.67 in her Traxxas Ford Mustang.

“This was a real team effort this weekend," Arend said. “I didn’t do the best job as a driver, at least not with my lights, but we were able to get it done. My crew got this car turned around faster than I’ve ever seen them do it and that made all the difference in the world. This is the first win for the new Toyota Camry so that makes it even more special. I got to the final (here) last year and didn’t win so this also makes up for that. I like to make the most of second chances."

Arend raced past Tony Pedregon, Tim Wilkerson and Jack Beckman to get to the final. He said the three hour rain delay, which forced teams to have quicker turnaround times in the pits between rounds, actually helped him stay focused today.

“We have some new guys on our team this year and they really stepped it up especially after it rained and we had to turn the car around quicker than usual," Arend said. “I call them the “yeller fellas" and they did a heck of a job this weekend. That 4.10 in the semis was a great run but we were solid all weekend. We ran good numbers every time. In the semis we had Jon O [Oberhofer, crew chief] Connie [Kalitta] and Del [Worsham] in our trailer and they make the right call and the car responded."

Arend jumped from 10th to sixth in the points standings and locked up the seventh starting position in the lucrative Traxxas Funny Car Shootout at the Mac Tools U.S. Nationals. Robert Hight, who lost to Courtney Force in the second round, remained at the top of the points order, while second-place Ron Capps saw his six-race final round streak come to an end with a first round loss to rookie Alexis DeJoria.

In Pro Stock Motorcycle, three-time world champ Hines claimed his second win of the season on his Screamin’ Eagle Vance & Hines Harley-Davidson when final round opponent LE Tonglet turned on the red light at the start on his Nitro Fish Buell. It was Hines’ 27th career victory.

“As soon as I popped the clutch I saw LE’s red-light and I knew I’d won," Hines said. “Then, it was a nice comfortable ride. I saw him in front of me and paid more attention to his bike than mine and I think I probably missed high gear."

In earlier rounds, Hines defeated Scotty Pollacheck, Chip Ellis and Hector Arana Jr. The victory continued the Vance & Hines team’s streak of victories this season as Hines and teammate Eddie Krawiec have won all five bike races this weekend. Hines, however, was looking for a get healthy weekend after back-to-back second round losses at the last two events.

“We came in here with a new mindset," Hines said. “I’ve been down on myself the last few weeks and after Englishtown we took the bike and changed all the wiring and then went testing. I rode my bike and then rode Eddie’s [teammate Eddie Krawiec’s] bike and I ran pretty much the same on both so I came in here with a lot of confidence. Matt [Hines, crew chief] has a good tune-up for hot and muggy conditions and that made the bike a joy to ride. I’m also looking forward to going to Norwalk next weekend."

With the victory, Hines cut Krawiec’s series lead to 75 points.