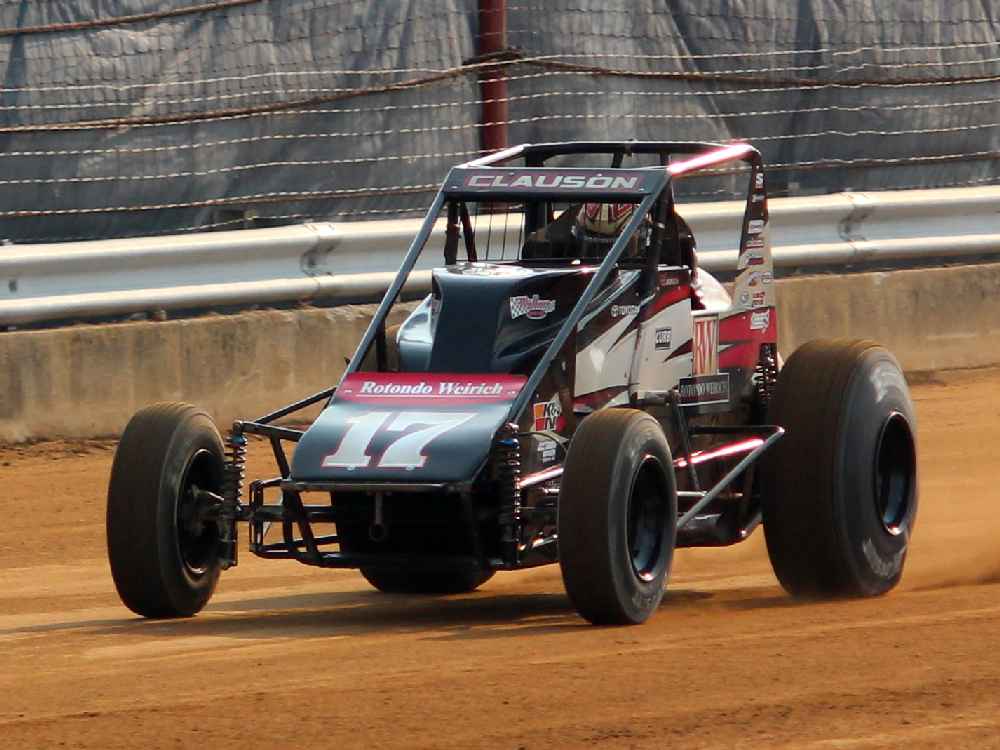 On Friday night at the Indiana State Fairgrounds, several thousand die-hard race fans got a glimpse of what real auto racing is supposed to look like. The 59th running of the Hoosier Hundred was held on the appropriately named “Track of Champions," the historic one-mile dirt oval where Barney Oldfield drove a mile in less than a minute for the first time in history on June 19, 1903.

I remember watching races at this track as a child in the summer of 1976. During the state fair, race events were sandwiched between rock and roll performances by Bachman Turner Overdrive and Chicago.

I bought a program for one dollar. Things were cheap back then.

There were no computers to distract us. Our TV sets received only four channels. Nobody owned a satellite receiver. Digital watches were a big deal. And on race day you could barely find an available seat in the grandstands an hour before the green flag dropped.

I’m not real bright, but I can’t help but wonder if there’s a connection. We’ve traded authenticity for colored electrons.

So what has happened to the Hoosier Hundred in the intervening 35 years?

Attendance is down. Friday night’s race drew a reasonable crowd, but good seating was still available everywhere. It was not a packed house. The fans who attended were generally age 45 and above. That alone should make race fans shudder.

The event functions smoothly and professionally under the management of Track Enterprises. Special guests included former Miss America Katie Stam, open wheel legend Jack Hewitt, and local television personalities. The PA announcer was informative and easy to listen to. My only gripe was that for the second year in a row I couldn’t find an official race program for sale anywhere.

Car count is down, but quality is up. Just making the field for the Hoosier Hundred was once a major accomplishment. But only 20 Silver Crown cars started this year’s classic, with only ten of them finishing the race. In fairness, much of this is due to a recent mandate forcing Silver Crown teams to convert to ethanol-based fuels, which forces teams to reconfigure their engines accordingly. The result is a lot of engine overheating and fewer entries in a division where car count is already a concern.

I wonder how many cars would enter the Hoosier Hundred if it became an unsanctioned sprint car event? Hey, don’t laugh. The Long Beach Grand Prix was once a Formula 5000 race, then became a Formula 1 race, then a CART race and today it thrives as an IndyCar event. The event did what it had to do to survive. I bet the Hoosier Hundred could attract 50 or more sprint car teams from across the Midwest with or without a massive purse.

A wonderful open wheel modified race was held just prior to the Hoosier Hundred. For the second straight year it featured an appearance by NASCAR great Ken Schrader, who won the 2011 race and finished second to Joey Kramer on Friday night. The modified race is really entertaining and adds a lot to the evening, despite the fact that only 12 cars were in the field. In fact, given the shortage of cars in the main event, some type of additional race event is almost mandatory to satisfy fans.

Exhibition laps were performed by 15 or 20 vintage dirt cars. They dated from the 1930’s through the 1980’s and represented a great cross-section of open wheel history.

The atmosphere at the Indiana State Fairgrounds is fantastic, despite the state’s insistence on charging duplicitous parking fees to the very residents who are already forced to fund government functions through a tidal wave of ever-increasing taxes. The seating is comfortable and offers perhaps the best overall view of a one-mile track anywhere in the world. Concessions are pricey but delicious. Grounds maintenance is excellent and you’d be hard pressed to find a more friendly, relaxing environment in which to watch an automobile race.

Best of all is the racing itself. The Silver Crown cars are front-engine machines that still have the V-8 roar that long ago disappeared from most other forms of championship racing. Unlike NASCAR super speedways and some IndyCar tracks, the drivers must lift in the corners and balance the car in a long, controlled slide through the corners that demands the utmost skill.

If you want to see something authentic, historic, and just plain fun, make plans now to attend the 2013 Hoosier Hundred. It’s more than a race. It’s the entire experience and the history of the event that you’ll appreciate.