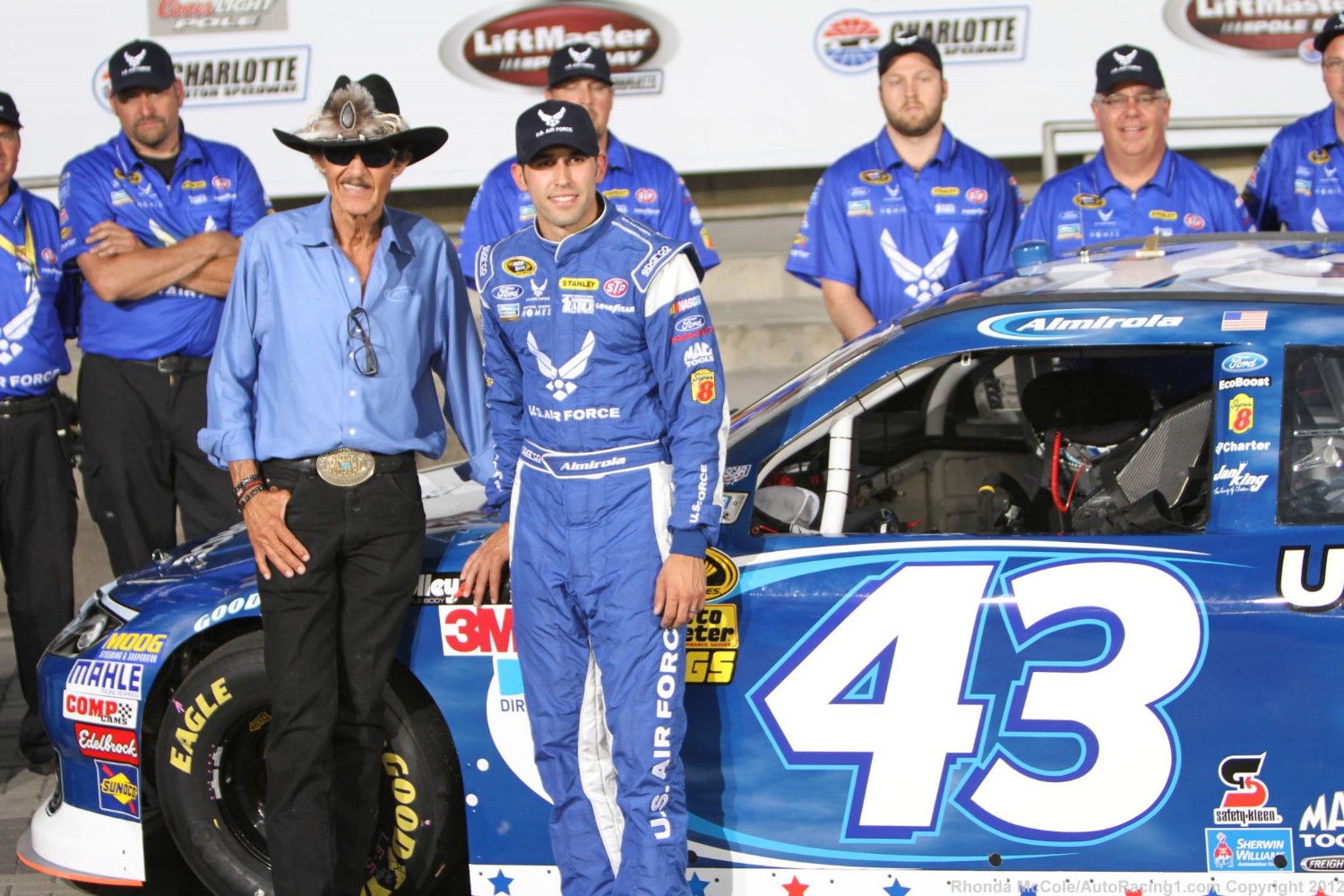 The NASCAR Sprint Cup Series teams will roll out onto the Charlotte Motor Speedway this Sunday for the second time in eight days. Last weekend, the event was the Sprint All Star race that featured five sprint like segments, for a total of 90 laps, with a winner take all format. On the opposite extreme, the second Charlotte race this Sunday, the Coca Cola 600, will feature one of the longest races in all of motorsports.

To get a good idea of which driver might strike it rich at Charlotte, we again turn to the experts from the Las Vegas based World Sports Exchange, (WSE).

Would anyone be surprised to discover that the WSE has Jimmie Johnson on top of their rankings this week? You shouldn't be. The driver of the #48 Lowes/Hendrick Motorsports Chevrolet has been red hot as of late and this team will be bringing major momentum to Sunday's race that may very well make them, once again, formidable. The WSE is backing that premise with 5 to 1 odds.

Johnson is the defending champion of the Coca Cola 600. He has a total of six wins at Charlotte with four of them originating from sweeping both events at the track in 2004 and 2005. In 2003, Johnson became just one of seven drivers to win the Sprint All Star Race and the Coca Cola 600 in the same week. In addition to the half dozen trips to victory lane, Johnson also has 10 top five finishes and 14 top tens along with a healthy average finish ratio, (AFR), of 11.9. That's exactly why he's the pre race favorite and a solid wager consideration.

At 8 to 1 you will find a trio of drivers featuring Kyle Busch, Tony Stewart and Carl Edwards. Busch is likely rated this high on the WSE's list because there are tell tale signs that indicates his Joe Gibbs Racing team has returned to the hard charging ways we've come to expect. He's ninth in the championship standings, 62 points out of first. Busch will be looking to improve on his Charlotte numbers this weekend. He's still seeking his first points paying win there but does have six top five finishes and a decent AFR of 16.7. The Charlotte Motor Speedway is another one of those 1.5 mile intermediate tracks on the Sprint Cup schedule. Busch has a flair for this type of track and has 11 wins on them.

Tony Stewart, 7th in the points at -42, is a former Charlotte winner with six top fives and a healthy 13.6 AFR. He's very strong on the 1.5 mile intermediate tracks and has won on them 26 times in his career.

Carl Edwards, 10th in the points at -74, is also seeking his first Charlotte but has a healthy 12.6 AFR at Charlotte based on five top five finishes. The 2012 season has, so far, been rather perplexing for Edwards and his team. They're not quite at the performance levels everything expected at the beginning of the year. However, Charlotte could the turn out to be the power play the team has been looking for. Edwards is very good on the 1.5 mile tracks with 17 previous wins on them.

At 9 to 1 you will find the Roush Fenway Racing duo of Greg Biffle and Matt Kenseth. Still leading the championship points, Biffle will be seeking his first Charlotte win on Sunday. He has three top fives but the AFR is a tick on the high side at 17.8. It's likely he will be paying some attention to his team mate during this race because there's only a two point separation between him and Kenseth.

Kenseth's Charlotte numbers are stronger than his team mate and includes two wins, seven top fives and a 14.4 AFR. His last win at Charlotte came during the October race last year.

At 11 to 1 is the tandem of Denny Hamlin and Kasey Kahne. Hamlin, fourth in the points at -17, is also winless at Charlotte. He only has one top five there with a 16.0 AFR. However, Hamlin has 13 previous wins on 1.5 mile tracks and that could make him an interesting long shot wager for this Sunday.

After a disaster of a start this season, Kasey Kahne has improved his points ranking to 16th at -128. He will be likely looking for wins now to earn a wild card berth in the Chase line up. That process could start at Charlotte. He has very good numbers there including three wins, six top fives and a 13.4 AFR. Kahne is a long shot wager worth of consideration.

Turning to the WSE's middle tier, Chevrolet drivers Kevin Harvick and Jeff Gordon are rated at 12 to 1. Harvick has a single win at Charlotte which came in May of last year. He also has two top five finishes, but the AFR, at 18.5, is a little on the high side. He's currently eighth in the points at -50.

When it comes to Jeff Gordon, his 2012 season could easily be summed up in two words: bad luck. He's currently 24th in the points at -170. There's certainly nothing wrong with the driver, crew chief, owner or the team. It's just simply bad racing luck. That could turn around this Sunday. Gordon's Charlotte numbers are quite good and includes five wins, 16 top fives and a healthy 15.9 AFR. He also has 45 career wins on intermediate tracks. Like his team mate Kasey Kahne, his Chase hopes may lie with earning a wild card berth based on wins. He could easily launch that process this Sunday. At 12 to 1, Gordon is a solid wager to win Charlotte.

Also in the WSE's middle tier are drivers Dale Earnhardt Jr and Brad Keselowski, at 15 to 1, followed by Martin Truex Jr at 17 to 1. In terms of numbers, Charlotte is not one of Earnhardt's better venues. He's seeking his first win there, only has five top five finishes and his AFR is a high 19.4. However, those numbers were compiled prior to the team's 2012 rejuvenation. Earnhardt is third in the points at -14 and has been running very strong. This is especially true of his performance during the Sprint All Star race last weekend. Is this the weekend Earnhardt might rid himself of that long standing winless streak? Many observers think so. This driver might turn out to be a lucrative long shot wager.

Keselowski has no Charlotte numbers whatsoever. No wins, top fives or top tens plus his Charlotte AFR is a high 18.8. So why is he rated at 15 to 1 by the WSE? First off, it's because he's Keselowski and you never know when this team is going to come on strong and embarrass the competition. Also, this team was very strong during the All Star Race. This is another long shot wager worth considering.

It's been said by many that this is going to the breakout season for Martin Truex Jr. He's sixth in the points at -39. However, his Charlotte numbers are not that great. He only has two top tens there with a 19.9 AFR. However, those numbers are from the past and do not reflect what's going on with team performance this year.

Looking at the WSE's lower tier for the Charlotte race, Clint Bowyer is ranked at 30 to 1 followed by Ryan Newman at 40 to 1. Also at 40 to 1 is Mark Martin, who has four Charlotte wins and 18 top fives. However those numbers were a long time ago.

At 50 to 1 is the duo of A J Allmendinger and Joey Logano. Juan Pablo Montoya is ranked at 55 to 1. Former Charlotte winners Jeff Burton and Jaime McMurray are listed at 60 to 1 while Paul Menard concludes the list at 70 to1. If you do not see your favorite driver on this week's list, they are automatically rated at 15 to 1.

Now for the disclaimer: NASCAR wants us to remind you that these numbers are for information and entertainment purposes. They neither encourage nor condone the placing of wagers on their races. However, if the temptation to place a bet is too large then at least you know the WSE has your back.

The race has 47 entries vying for the 43 starting berths. 12 of those entries are on the go or go home list. These teams are not guaranteed a start in the race because they are currently outside of NASCAR's top 35 in owner's points. These teams will have to rely on qualifying speed to make the race.

The Charlotte Motor Speedway has 24 degrees of banking in the turns and five degrees in the straightaways. The front stretch measures 1,952.8 feet, the backstretch is 1,360 feet long. The track currently has seating for 146,000.

The Charlotte Motor Speedway officially opened in 1960. The first NASCAR Sprint Cup race was held in June of that same year and was won by Joe Lee Johnson. Since that time there has been 106 Sprint Cup races at Charlotte that has sent 44 different winners to victory lane.

The track qualifying record, 193.216 MPH, was set by Elliott Sadler back in October of 2005. Ryan Newman holds the track record for winning the pole position nine times. 14 Sprint Cup races at Charlotte have been won from the pole position.

Weather should not be a problem at Charlotte. The weekend forecast calls for mostly sunny skies with temperatures in the upper 80's.

The Coca Cola 600 will be broadcast by Fox Sports with the pre race show beginning at 530 pm eastern time. The race re broadcast will be on Wednesday, May 30th, at 12 pm et.