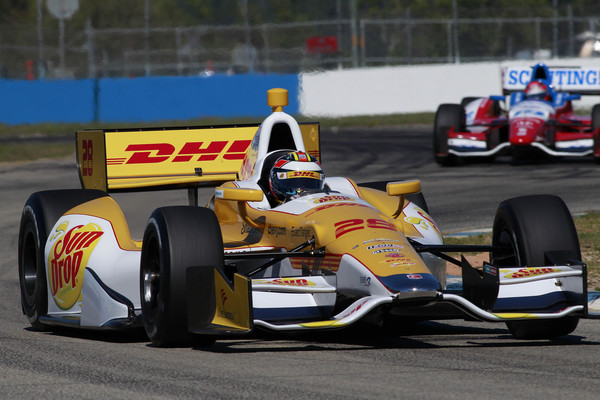 The unbeaten track performance of the new Chevrolet IndyCar V-6 engine is bringing acclaim to the engineers who created it and hope for its significant technology to find its way into passenger cars.

Engineers Mark Kent and Matt Wiles, along with Steve Miller and Steve O'Connor from Ilmor Engineering, took home the 46th annual BorgWarner Louis Schwitzer Award on Monday for their work on the Chevrolet IndyCar V-6 engine. The award recognizes individuals for innovation and engineering excellence in the field of race car design, specifically related to the annual Indianapolis 500 race.

“Going four-for-four at the racetrack and winning the Louis Schwitzer award has exceeded our expectations, but the ultimate goal for this project has always been to develop powerful fuel-efficient engine technologies that could be transferred to production cars," said Mark Kent of the GM Performance Vehicles and Motorsports group. “Racing has always been a great proving ground for advanced powertrain technologies, and this IndyCar V-6 is no exception."

Some of the direct-injection turbo capability that gives the IndyCar engine its edge also will power the new Ecotec 2.0L engine coming to the 2013 Chevrolet Malibu. Rated at 259 horsepower (193 kW) and 260 lb.-ft. of torque (353 Nm) between 1,700 and 5,200 rpm, the 2.0L is more powerful than Malibu’s previous V-6 engines. Available turbo charging also powers Chevrolet’s Sonic and Cruze.

The secret to the IndyCar engine’s success is how its twin turbochargers boost performance and throttle response. The team enhanced the engine’s Hitachi fuel delivery system with six high-pressure direct injectors in the heads and six lower-pressure injectors in the plenum.

The team used computer models and testing to determine the best possible placement of fuel injectors to make them suitable for production cars, and made use of special coatings in the engine and exhaust system to reduce friction and improve fuel economy. They also designed compression ratios and piston shapes to manage the heat generated during operation.

With peak performance of 12,000 RPM, the 2.2-liter V6 is the highest revving direct injection engine in current racing competition.

“Even though the four of us were individually recognized, it was the entire team that deserved recognition," Kent said. “This award would not have been possible without the significant contributions by the GM Global Advanced & Race Engine Engineering group, Ilmor Engineering, Hitachi and our Chevrolet IndyCar teams."