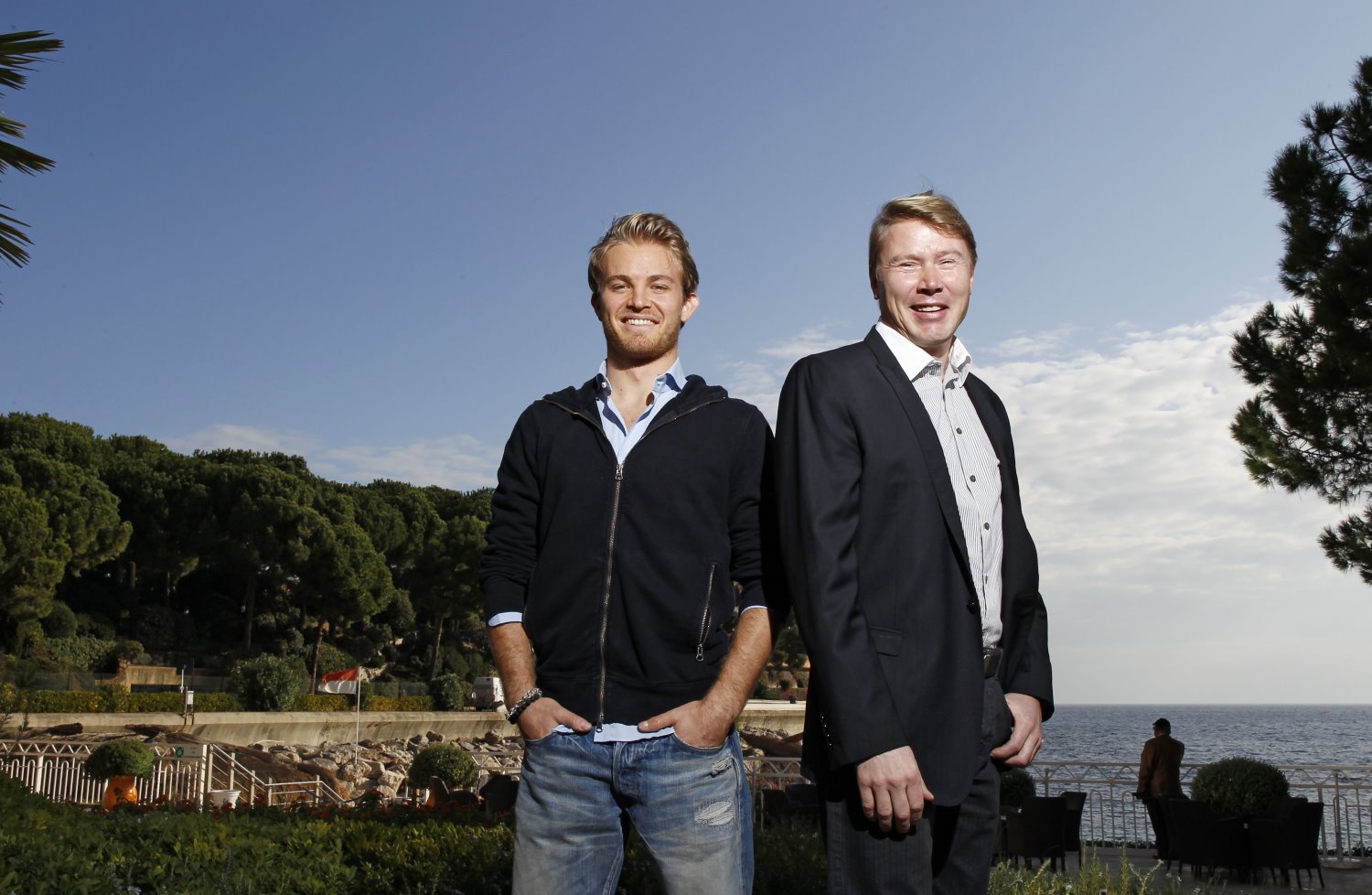 It's a scene that happens hundreds of thousands of times a day around the world: two people meet in a lift, greet each other and begin to chat about work and life. The twist in this particular story, though, is that the elevator is in Monte-Carlo; the two men are resident in the same apartment building, separated by little more than a few floors; and both have written their own chapters in the very exclusive grand prix racing history of Mercedes-Benz.

Mika HÃ¤kkinen was the first Mercedes-Benz world champion of the modern era, and a two-time title winner in 1998 and 1999 with McLaren Mercedes; Nico Rosberg is the first man to win a Grand Prix at the wheel of a Silver Arrow since the great Juan Manuel Fangio, in the third season of the return of the Silver Arrows. On the eve of the race around their home streets, the two men met to discuss their experiences as part of one of the most spectacular events in world sport.

The histories of Mika HÃ¤kkinen and Nico Rosberg have been intertwined for more than twenty years, when Nico was just a young boy and Mika worked with Keke Rosberg, who led his management team.

"I don't remember when we first met – maybe Mika does!" laughs Nico when the question comes.

"Well, I started working with Keke at the end of 1987," recalls Mika. "I think the first time we met must have been down here in Monaco in the early '90s. I was visiting Keke, and you were playing in your room! It's possible I was his first sponsor in karting – do you remember that?"

"Yeah, sure," laughs Nico. "It was 1997, I was 11 years old and competing in the French go-karting championship. I had a poster in my room with all my sponsors on there, and one of them was you!"

"My son is eleven now," says Mika, picking up the thread. "I'm sure I did a contract with Keke that one day, when Nico will win races and be world champion, he has to start supporting my son Hugo!"

If the early stages of Nico's career were supported by Mika – who today himself is a partner with Didier Coton in Aces Management and has, among others, young Finn Valtteri Bottas under his wing – the parallels between the two have only grown stronger as time has passed. Both Mika and Nico had to wait until their seventh Formula One season before climbing the top step of the podium – Mika after 96 races, at the 1997 European Grand Prix in Jerez; Nico in his 111th start, at this year's Chinese Grand Prix. And both in their third seasons driving Mercedes-Benz-powered cars.

"Your first victory in Formula One always feels like it is a long time coming," explains Mika. "And especially in my case – but when it arrives, the feeling is just amazing. But problems are part of life, and winning or losing, they don't disappear. You need to keep understanding the cause of disappointments and where you and the team can improve. There is no point having your face upside down for one week – it's better to pick up the phone, travel, see people, talk, organize yourself. Then you know that at the next event, you will be stronger – and if not the car, then yourself; you can always be better. Because the day when you have a car to win, you have to be ready. If not, it's too late. I knew that one day I was going to win, it just took a long time."

"I had exactly the same feeling – Ross, all the guys, kept telling me that the win would come, I just needed to stay patient and take my opportunity," agrees Nico. "Of course, you get frustrated if it doesn't go perfectly, but time takes that away and you keep going, follow the development, communicate constantly with the team."

"Nico did a perfect weekend in China and deserves full credit for that win," emphasizes Mika. "It was not depending on circumstances or luck, but purely on his hard work. As a Mercedes-Benz ambassador, it was great not only to watch his achievements, but to enjoy seeing Mercedes-Benz back on the top step of the podium."

Inevitably, the conversation soon turns to the unique challenge of racing around the Monegasque streets, which have been home to both of them for more than 20 years. For Nico, the tunnel was once the route to school, in the passenger seat next to his Mum or on the school bus. And that 'local' feel is one that Mika says remains throughout the weekend.

"I had some great victories in my career, but Monaco was something special," remembers Mika. "I have lived here for 20 years and the thing you realize is that the people who work on the race track are also the people who live and work in Monaco – the police, the pompiers. In everyday life, these are the guys you see in the street and they say 'hi' as you walk past. To win in Monaco is like winning in your home streets, and you recognize faces all through the weekend."

"It's home for me too, of course," picks up Nico. "I've grown up here, all my friends are here and my family, I know everybody and it's very special to race here. Mentally, it's quite a demanding weekend. You have a lot going on, a lot of PR events and appointments. Plus on track, too, it's a bit more intense – but not so much. You need to be super concentrated at every circuit."

"That's true. But what changed for me was that, when I got a car that I would win races with, Monaco became more important for some reason. When you are hunting pole position in Monaco, your mind changes; you put yourself in a higher power, even though you think you are doing it already. When you are fighting for P11 or P12, you always think you are doing your maximum. But when I started fighting for pole, it just happened that I was working even harder to reach my goal – but not purposely. And of course, we changed the car, too: the steering lock, and the seating position to sit higher in the car, because the aero was not so important and we wanted to see the Armco properly."

"That's interesting, because we definitely make changes, too," says Nico. "But I don't think it's common practice, even today."

With that, the two men are off to inspect the circuit at the wheel of the Mercedes-Benz SLS AMG Roadster. Over the years, Mercedes-Benz has been synonymous with success in Monaco – from the three consecutive victories in 1935, 36 and 37 for Fagioli, Caracciola and von Brauchitsch respectively; to the seven Formula One victories for Mercedes-Benz power, including three of the last five. And the MERCEDES AMG PETRONAS Formula One Team will be working hard to add a new milestone to the company's heritage this weekend.