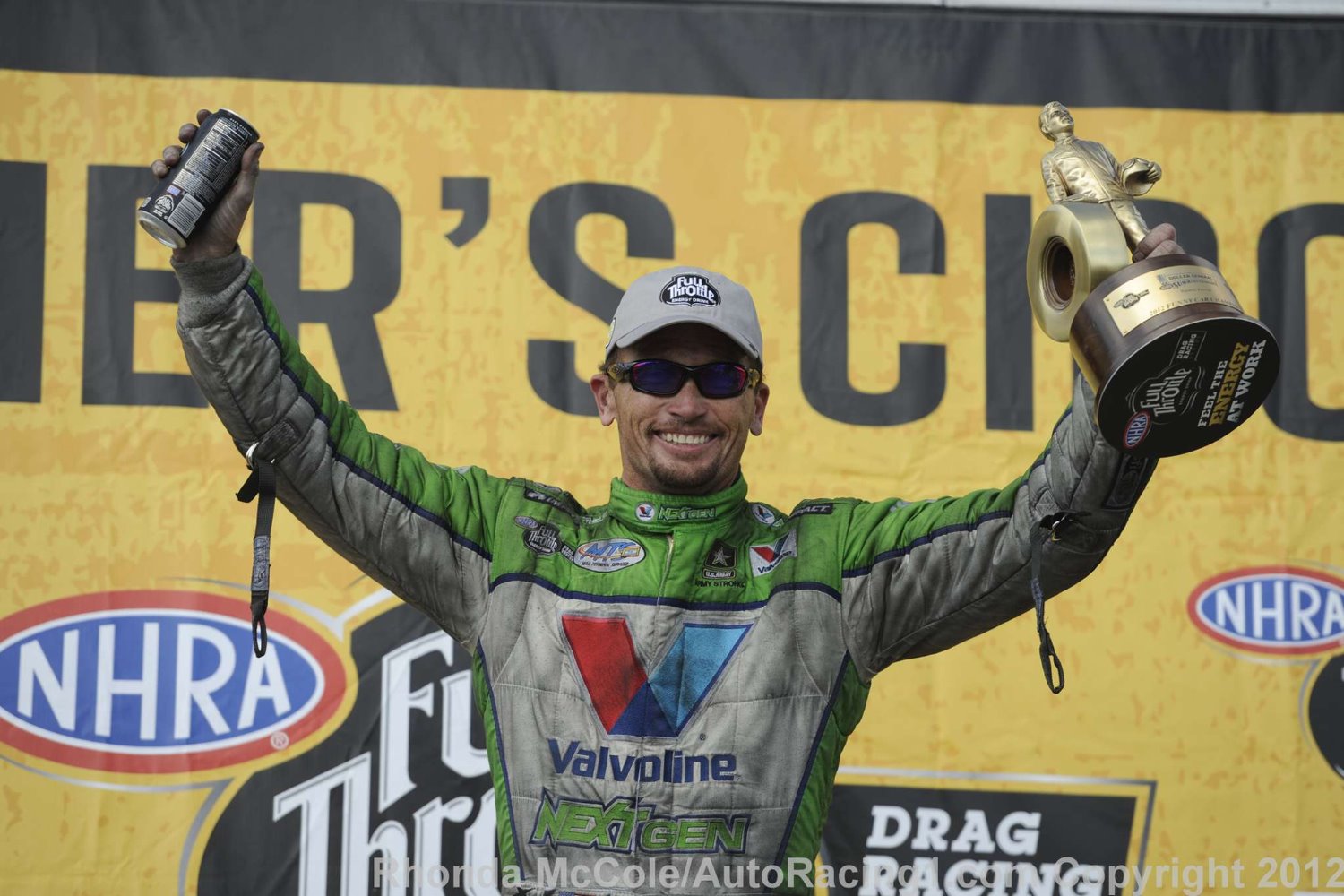 Jack Beckman raced to his first Funny Car victory of the season Sunday at the Dollar General NHRA Summernationals at Heartland Park Topeka.

Following the Las Vegas event in early April, Beckman and Capps switched cars and crews within their Don Schumacher Racing organization. Since then Capps has been to four consecutive finals and Beckman has struggled a bit, posting one DNQ, a first round loss and two second round losses.

“It’s a big win for us," Beckman said. “We’re right back in the hunt. So much has transpired since Las Vegas. We switched cars, we switched trailers, and we switched teams. It’s great to know that we have a car that we can win with again. That was my 13th win, and I try to appreciate every win because you never know when it can be your last."

With new crew chief Todd Smith making the tuning calls, Beckman drove past Alexis DeJoria, Mike Neff and Tim Wilkerson to advance to the final round. In the final, Beckman turned on both bulbs at once while staging against Capps. That put him in position to leave the starting line first, which he did with a near-perfect .004 reaction time.

“They [the NAPA team] were clearly outrunning us," Beckman said. “When we saw them run 4.12 in the semis, we knew we couldn’t run that without stepping too far that the risk of smoking the tires was too great. Our strategy was to put a 4.15 in it and hope something happened with their car. I think I dodged a bullet on the starting line. I had a hiccup in staging in the final round that could have bit us. The irony is that I don’t know if we could’ve won any other way."

Robert Hight, who lost to Capps in the semifinals, maintained his series lead, 179 in front of Capps. Beckman improved to fourth overall with the victory.

In Top Fuel, Grubnic edged Spencer Massey at the finish line to take his first win since 2006. It was his third career victory and his second at Heartland Park. Grubnic’s Candlewood Suites/Optima Batteries dragster posted a 3.893 at 319.07 while Massey’s FRAM machine trailed with a 3.910 at 309.98.

The native Australian who now calls Ennis, Montana home drove past Bob Vandergriff, Atlanta winner Steve Torrence and Brandon Bernstein to advance to the 16th final round of his career.

“My whole career has been ups and downs, but you have to go through these troughs to appreciate the peaks," Grubnic said. “Today is one of those peaks. My first win came here in 2005, and it’s great to do it here again. Why we have success here in particular is beyond me, but we’ll take it where we can get it.

“It’s all about my crew guys, Conrad [team owner/tuner Connie Kalitta], and all the people who support Kalitta Motorsports. I’d be lying if I said going a long time without winning didn’t affect me. Seeing the win light in the final is like driving through a brick wall. You see all the bricks disappear, and then you just start smiling."

With the runner-up finish, Massey regained the series lead, 12 points in front of seven-time world champ Tony Schumacher. Grubnic moved to eighth in the standings with the win.

Johnson raced to his second Pro Stock victory of the season and 11th of his career, powering past series points leader Greg Anderson in the final round. Johnson covered the distance in 6.587 at 210.54 in his Team Mopar Dodge Avenger to hold off Anderson’s Summit Racing Equipment Pontiac, which trailed at a 6.696 at 210.21. It was Johnson’s second victory at Heartland Park (also 2009).

“The whole crew for the Mopar Dodge Avenger was just so strong and so consistent all weekend," said Johnson, who outran Ronnie Humphrey, Ron Krisher and defending winner Shane Gray to advance to the final round.

“Today our mission was to be consistent and maintain lane choice," Johnson added. “We did that until the final round and it just so happened that in the final the right lane turned out to be better than the left, and Greg shook the tires a little bit. So it worked right into the palm of our hands. We’ve been after them [the Summit cars] for the last few races and finally got the win and gave them a run for the money. This Pro Stock battle for the rest of the year will be a knock-down drag out."