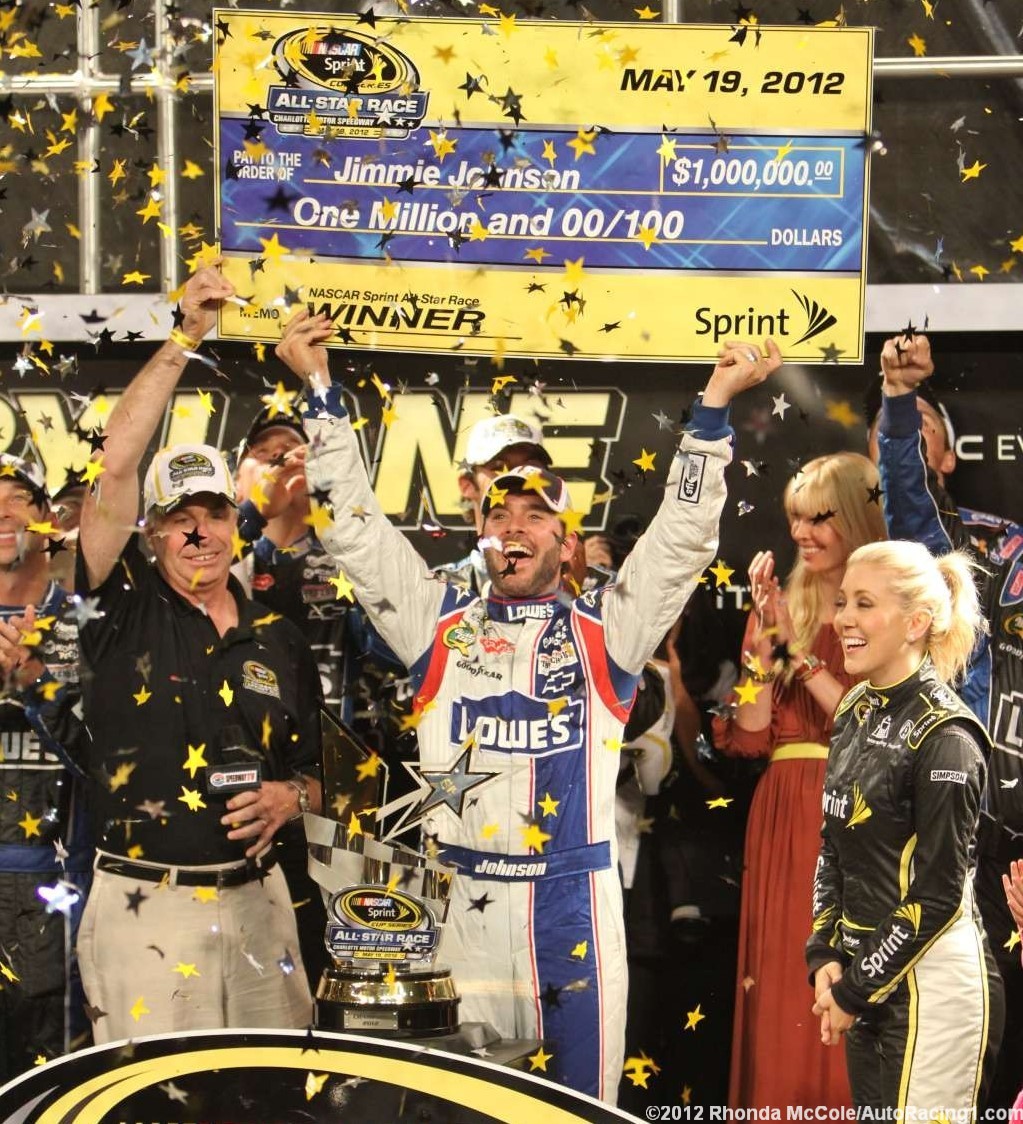 Johnson and his team played their strategy to perfection, wining the first segment and running at the back of the pack for the rest of the race, saving their tires for the final ten-lap sprint that Johnson led from the start, easily outdistancing Brad Keselowski by 0.841 seconds for his third All Star victory.

Johnson pocketed $1,071,340 for winning the race, completing a remarkable week where he ended a personal 15-race winless drought and earned the 200th victory for Hendrick Motorsports last Saturday night at Darlington Raceway, and tying the teammate Jeff Gordon and the late Dale Earnhardt, Sr. as three-time winners of the event.

“We had a strategy – we knew what would be best for our team," said Johnson. “We weren’t sure we could get there starting sixth. This race car is so amazing. I put her on the outside at the start of that first heat and let her rip around the top and got to the lead. And then we were smart from there and worked on the car and got it right so we could be good at the end.

“Everybody knew if you could win that first segment, you could control the night. I really think whoever won that first segment would have done the same thing. It's just what you do when you can control the race like that. We took great advantage of it."
.
After completing his victory burn-out, Johnson picked up team owner Rick Hendrick on pit road, who straddled the drivers side door as Johnson took his 14-time NASCAR championship-winning car owner on a victory lap around the front stretch.

“That was the dumbest thing I've done ever in racing tonight," said Hendrick of his hitchhiking ride. “We just were so excited. When I climbed in, I got my foot hung in the dash, had his knee pinned where he couldn't get to the clutch. I thought, I'm going to be like a busted watermelon out here. It was a neat deal.

“I'm just proud of these guys. That pit crew, that young crowd, is just pumped. I think the guys are working together. It just feels terrific. After you win the 200th, that was kind of a monkey on our back for a while. To get the pit crew deal done, then coming here tonight and running this well, just excited about the 600, excited about the rest of the year. Everything has been clicking for us lately."

Taking advantage of the unique format of the all star event – where the winners of the first four 20-lap segments start in the front four for the final 10-lap shootout, Johnson stormed through to the front from sixth starting spot to win the first segment, and then hung toward the back, topping off the car and saving their freshest tires for last.

Starting the second segment, Denny Hamlin was one of seven drivers who elected to stay out, along with Earnhardt, Jr., who started at the rear of the field after winning the earlier Sprint Showdown to transfer into the all star field.

Hamlin led the first 16 laps of the second segment before Kenseth powered past on the outside to take the lead. Kenseth would finish off the segment in first place, followed by Earnhardt, Jr., Hamlin, Marcos Ambrose and Sprint Showdown runner-up A.J. Allmendinger.

During the ensuing caution period, Keselowski opted to stay out and led the field to the green in the third segment with Kasey Kahne running second. Keselowski then checked out on the field with only Kahne able to gain any ground, running the high line around the 1.5-mile oval.

With five to go, Kahne reeled in Keselowski and tried to dive under to pass for the lead, but could make the pass stick. Finally, as they came the to the checkered flag to end segment three, Kahne came side by side with Keselowski only to come up inches short at the line as the Blue Deuce took segment three.

The caution flag brought the entire field to pit road for their final stops, with the exception of Kurt Busch, who stayed out and took over first place to start the fourth segment while at the back, Jimmie Johnson and Matt Kenseth topped off and put on their final set of tires.

Under green, Busch led the opening lap before Earnhardt, Jr. slipped by underneath to take the lead, bringing Allmendinger with him. Earnhardt led the remaining 19 laps to win segment four while Kenseth and Keselowski followed Johnson’s strategy and hung in the back and conserved their cars for the final segment.

Following the final 20-lap segment, the entire field came to pit road for a mandatory stop.

Johnson, by virtue of his crew winning last Thursday’s Sprint Pit Crew Challenge, had the first pit stall and was able to pull off a stop and go to come off pit road with the lead followed by Kenseth, Keselowski, Earnhardt, Jr. and Ambrose

On the start, Kenseth spun the tires and began to freefall back through the field as Keselowski took up the chase in second, by Johnson proved to much to beat, opening up a four car-length lead that only got bigger as the laps wound down.

“It’s all about the restart," said Keselowski. “I was hoping we’d get a yellow and I’d get another shot at Jimmie (Johnson), but I think you saw all night the high line on the restart just wouldn’t go. I don’t know if I’d have been able to do anything, but I would have liked to have had another shot. I thought I could do something with him the first few laps, but it just wasn’t meant to be."

For Kenseth, what should have been a three-car race to the finish was done in by another poor restart that seemed to plague the outside lane all night.

“My restarts seemed to always look bad, but here especially, for some reason, that bottom lane would really restart hard and the outside would always spin," said Kenseth. “I knew it was coming, but I honestly didn’t know what else to do. I just couldn’t get going and then by the time I got in line I was fourth and with 10 laps you’re pretty much done."

Kevin Harvick, Ambrose, Kurt Busch, Kahne and Ryan Newman made up the rest of the top ten.

Defending All Star Race winner Carl Edwards saw his night go up in smoke with a blown engine on lap 27, while his Roush-Fenway Racing teammate Greg Biffle lost an engine on lap 69, ending up as the only two cars that did not finish the race.