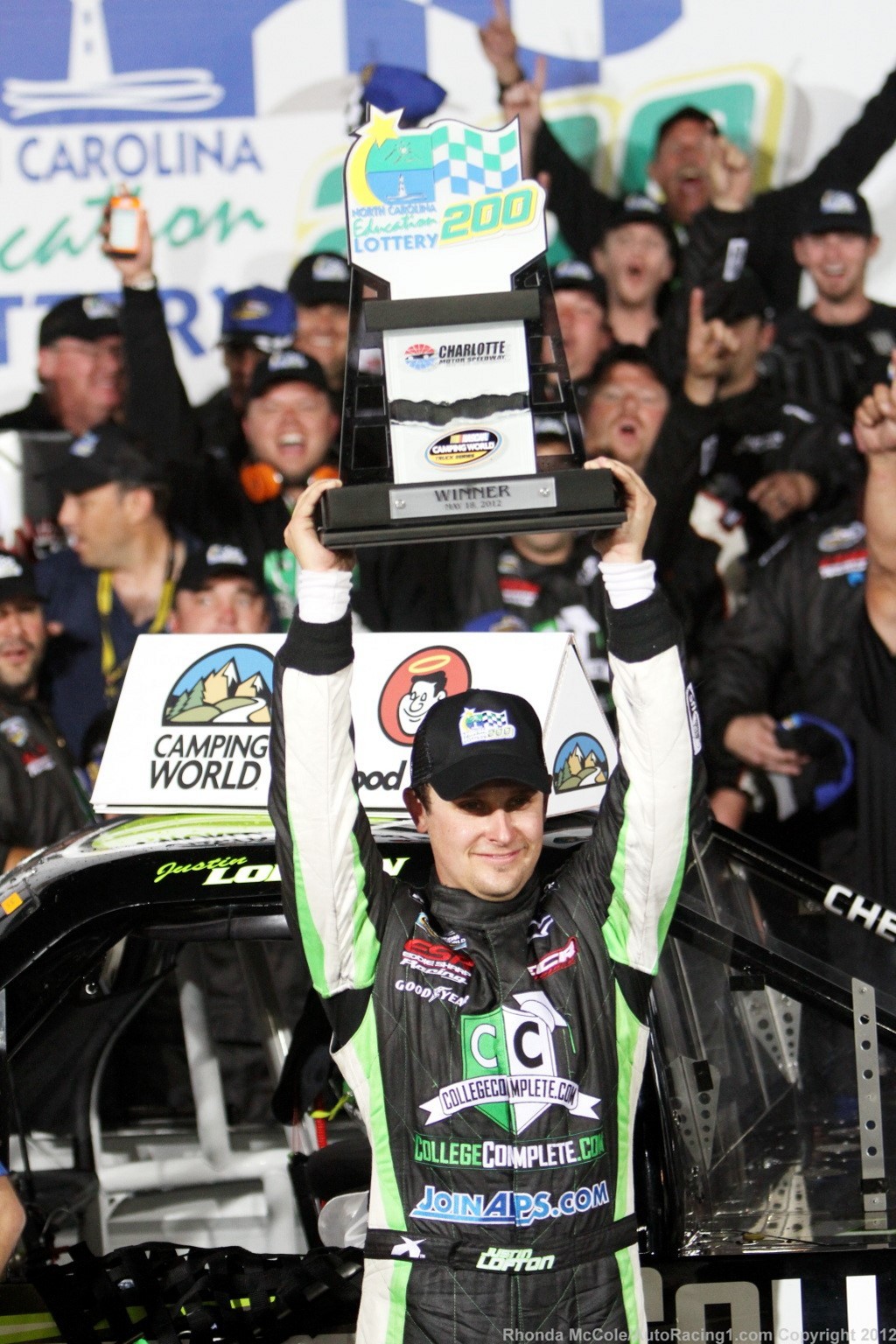 The big gamble that team owner Eddie Sharp undertook in the offseason paid off in spades on Friday night, as his team celebrated their first victory in the NASCAR Camping World Truck Series with driver Justin Lofton taking home his first checkered flag in the North Carolina Education Lottery 200 at Charlotte Motor Speedway.

Lofton led the final 10 laps after getting past Brad Keselowski on a restart and held on through the final caution period to record his first victory in his 55th series start.

With the win, Lofton takes over as the points leader by one point over Timothy Peters.

“I know, this is amazing," said Lofton. “I really don’t even know what to do. This day’s been a long time coming.

“This entire week, it was one of those weeks where I was just real calm, real excited about the race. I’ve seen all the hard work. It’s just amazing to be able to do it for these guys. I’ve seen all the hard work that Dan (Bormann, crew chief) puts in, day in and day out. Dan believed in me, taking a chance, quitting a job, coming over to take over as crew chief. He has done an amazing job."

Lofton’s win was the first NASCAR victory for longtime ARCA Series owner Eddie Sharp, who purchased the assets of Kevin Harvick, Inc. to field a two-truck team in the Camping World Truck Series for 2012 and brought Lofton – who won the 2009 ARCA title driving for Sharp – back into the fold.

“Everybody knows my story, and the really big story was KHI (Kevin Harvick, Inc.) going away," said Sharp. “We went out on a limb, and I had some people who believed in me. Justin and his dad believed in me, so I made a huge commitment and bought out KHI. There were a lot of people who thought I was nuts.

“To do what we’ve done this early… you know, you can buy all the equipment and stuff, but it all comes down to people. We put all our cards on the table. This is what I do. I don’t have a bunch of dealerships; I don’t own another business; I’m not in construction, this is what I do. This is by far the biggest win of our career."

Lofton led just two times for a race-high 44 laps, running the last 50 laps in a spirited duel with Keselowski.

Keselowski stayed at the front of the field for much of the night, but fell back after getting caught a lap down after the yellow flag waved during a round of green-flag stops on lap 72.

Lofton moved into the lead and showed the way for the next 34 laps before Keselowski clawed his way back through the field and closed in on Lofton, ducking inside of the leader coming through the front straight with 16 to go.

Just two laps later, the caution waved for Nelson Piquet, Jr., lining the field up for a restart with 11 laps to go.

As the field came to the green, Hornaday got into the back of Keselowski, getting his Dodge RAM loose as Jason White pushed Lofton to the front. It was a short-lived respite as the caution flew for the eighth and final time just three laps later, setting up four-lap shootout to the finish.

On the final restart, Lofton got a good jump as Keselowski, Bodine and Hornaday went three wide for second, allowing Lofton to pull away.

Keselowski would finally battle his way past Bodine to re-gain second place with two laps to go and tried to reel in Lofton, clinging to the high side looking for an edge, but came up four truck-lengths short at the finish line.

“It all came down to the restarts and who was willing to work together and the last restarts, nobody worked with me," said Keselowski. “They did everything they could to wreck me. I was real frustrated about that but that’s racing and we’ll move on."

After the race, Keselowski exchanged words with Hornaday, claiming Hornaday showed a lack of respect in the final laps of the race

“I just told him I take care of him all the time in these races, I respect him and he shows me none at all. So, I’m just going to have to stop respecting him," said Keselowski. “That’s just the way it’s going to have to be. I just wanted to make sure that he knew that next time we’re racing each other."

Hornaday, for his part, saw nothing wrong about how he raced Keselowski on the restart, chalking it up to “just racing".

“I rode the back of him during a restart, but they stopped and played jackrabbit and somebody got into the back of me and I just had to go too," said Hornaday. “Sorry it had to happen to him, but we’re all looking for spots."