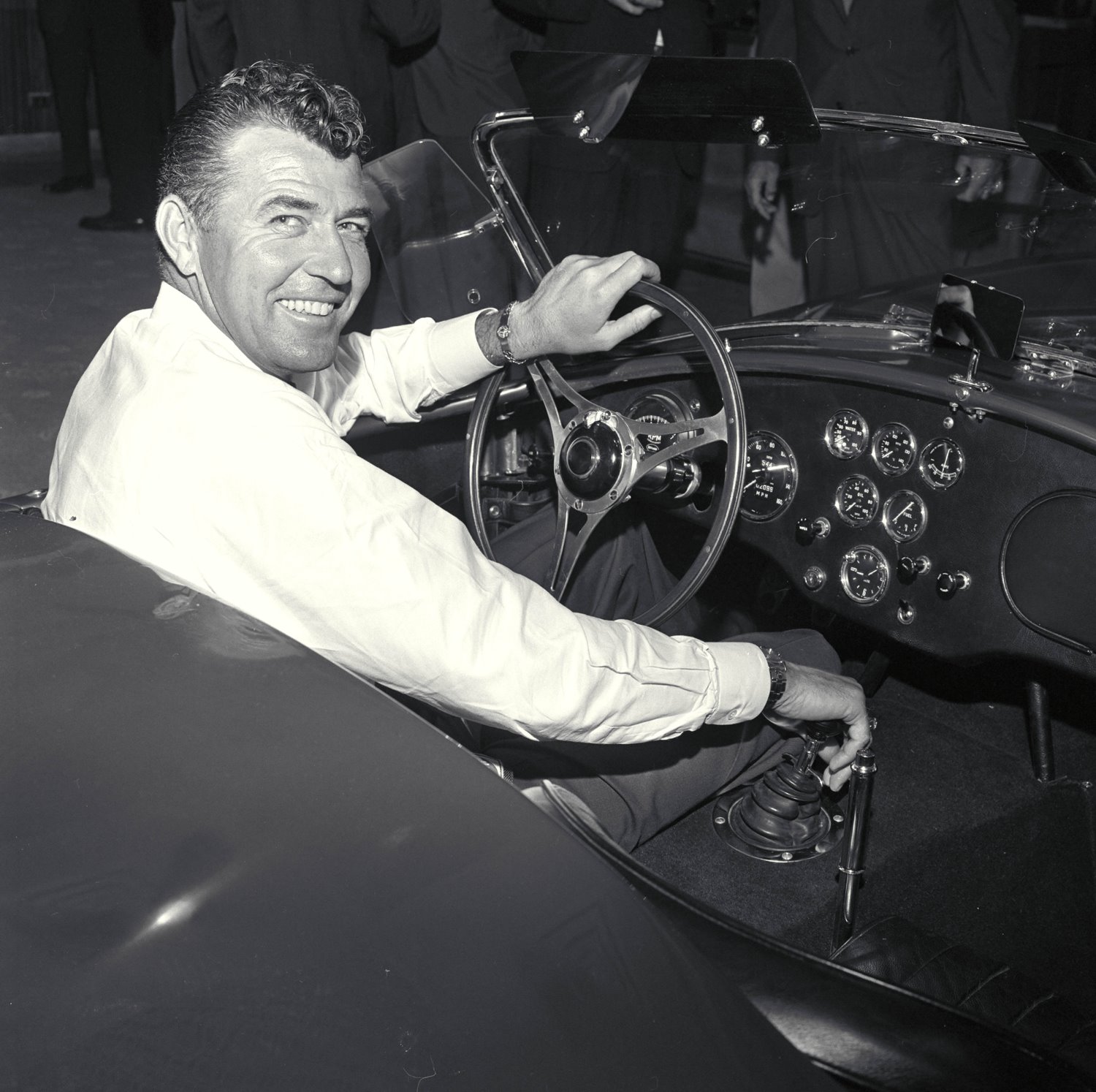 Born on January 11, 1923, in East Texas, Shelby is considered one of the truly great American success stories of the 20th century. Race car driver, WWII “Flying Sergeant", philanthropist, automotive entrepreneur and racing team owner, he came to embody the ingenuity, tenacity and grit needed to win during his 60+ year career.

The son of a postal worker in the hamlet of Leesburg, Texas, Shelby attended high school in Dallas and joined the Army to fight in World War II. After serving as an aviator in the war, he returned home to Texas where he dabbled in business with a dump truck operation, a chicken farm and a sports car dealership. It was while he co-owned the Dallas dealership with fellow Texans Jim and Dick Hall that Shelby first tasted car manufacturing. Together, they created a handful of “Scaglietti Corvettes" that were based on GM’s roadster.

Meanwhile, he began to feed his obsession for speed. Shelby’s first race was at a drag strip in a 1932 Ford. Moving on to road courses, he raced throughout the USA in his spare time. When all of his chickens died of limberneck disease, Shelby moved into the cockpit as a career.

Once on his way to a race, Shelby had to wear his work clothes from the farm to make the start time. When his odd racing attire netted him more attention and publicity than his victory, Shelby made the striped bib coveralls his trademark.

In just a few short years, he became a dominant figure on the racing scene. He was courted by the top car manufacturers in the world to drive for them, including Ferrari. Shelby captured three national sports car championships in the United States, earned a spot on the Aston-Martin team in Europe, won the 24 Hours of Le Mans and set land speed records at Bonneville Salt Flats. Twice, he was named Sports Illustrated’s “Driver of the Year."

Still in his prime, a heart condition caused him to abandon his driving prematurely in 1960. Instead of reeling in self-pity, Shelby turned his attention and talents to race car design and automotive manufacturing. Carroll Shelby believed in combining big horsepower with inspired engineering. He first approached Chevrolet because of his experience with the Scaglietti Corvettes. The idea was to fit the 283 c.i.d. Chevrolet motor into the AC Ace chassis, as the English carmaker had lost its engine deal. However, GM turned down what would have essentially been a competitor to their existing sports car.

That led Shelby to approach Lee Iacocca at Ford Motor Company with the idea of building a two seat sports car using the company’s new small block engine. It was the beginning of a lifelong friendship between the two.

When Ford agreed to supply motors and cash to start the venture, Shelby vaulted into action. He formed “Shelby American" around a group of Southern California hot rodders. They shoehorned Ford’s engine into the lightweight Ace roadster. Christened the Cobra, a name which Carroll said many times came to him in a dream, Shelby’s CSX2000 was introduced at the New York Auto Show in 1962. It turned the sports car world on its ear.

After developing a competition version of the Cobra, Shelby fielded a team in Europe to race against the best. In addition to racing the Cobras, both in coupe and roadster form, he eventually added Ford GT’s to the team at the behest of Ford Motor Company.

In 1965, they won the FIA sports car world championship and the next year captured the overall win LeMans with the Ford GT and a class win in the Cobra Daytona Coupe. Carroll Shelby is the only man to have won the prestigious Le Mans race as a driver, team owner and automotive manufacturer.

“Carroll Shelby was an automotive visionary and leader," stated Dan Gurney, who was part of the Shelby American racing team and an American legend in the car building racing world. “His West Texas down-home bib overall style had a huge emotional impact on me and when he launched his now legendary Ford powered Cobra team, I found myself a very willing volunteer to lend my driving ability to his quest to take on the established European teams on their home turf.

As part of Shelby American, we managed to win some tremendous races together: the very first FIA sanctioned points race for Cobra at Bridgehampton 1963 in a Cobra Roadster, the GT classes at the Targa Florio, at Le Mans and at Goodwood with the Daytona Cobra Coupe in 1964. Then we won the crown jewel: the 1967 Le Mans 24 Hour Race with the Ford Mark IV. His leadership was very unconventional and more powerful than either his friends or competitors ever imagined. His charm will be missed, his reputation as a motorsports icon is secure."

At the same time, Shelby’s operations turned out the Shelby 289 and 427 Cobras, as well as a succession of Mustang-based Shelby’s created at the request of Lee Iacocca at Ford Motor Company. He scaled back his California operations in the late 1960s when new government regulations and insurance rules began to affect the sales of performance cars. For several years, he operated businesses in Africa until civil war in the region closed them down.

Shelby was also a pioneer for modern licensing programs in the automotive industry. Beginning in the 1960s, he began licensing his name and designs for various products. Unfortunately, he was forced to assert his right to his famous trademarks and designs many times over the years, too.

In 1982, he began helping his friend Iacocca, who had assumed the helm at Chrysler, to enhance performance of the cars at the struggling company. His team turned the lowly K car into a pocket rocket and pioneered a new class of cars. They also created the muscle truck and developed the Dodge Viper, which paced the 1991 Indy 500 with Shelby at the wheel.

In 1988, Shelby started building Cobras again. Teaming with McCluskey, Ltd, he began development of the “mystical 43" 427 S/C big block Cobras, which were the last 43 chassis numbers left from FIA homologation. That laid the groundwork to develop a limited line of “continuation" big block Cobras. Carroll Hall Shelby 1923-2012 In 1995, his long-established company, Shelby American, opened a facility in Las Vegas at the new Speedway to expand his continuation Cobra operations. In Las Vegas, he later manufactured the Oldsmobile powered Series 1 roadster in cooperation with GM and added other Cobra models. In 2005, Shelby entered into a new agreement with Ford Motor Company that involved him in the development of the new Ford GT and led to the re-introduction of several Mustang based Shelby cars, including the Shelby GT-H, Shelby GT-500, Shelby GT-500 “Super Snake," Shelby GT and Shelby GT500KR.

Carroll Shelby spent 50 years establishing and protecting his name, trademarks and car design rights, and in the 1980s he established Carroll Shelby Licensing, Inc., which licenses companies worldwide to manufacture, market and sell everything from the best and fastest muscle cars on the road (e.g. the 1960s Shelby Cobra 289, 427 and Daytona Coupe, and more recently the Ford Shelby GT-500) to premium Shelby memorabilia. These first in brand licensees range from Ford Motor Company’s manufacture of the new model year Ford Shelby GT-500s, to clothing, diecast model cars and exciting video games such as “Need for Speed" (Electronic Arts) and “Forza Motorsport" (Microsoft).

“At Ford, Carroll Shelby will always be remembered as an innovator, a performance vehicle legend but most importantly an incredible partner and close friend for more than 60 years," said Edsel Ford II, member of the Board of Directors of Ford Motor Company and great-grandson of Henry Ford, founder of Ford Motor Company. “The Ford and Shelby collaboration is something that has always been very important to me personally and Carroll will continue to be the inspiration behind our future collaboration that will carry his name. My family and I are honored to have had Carroll as a friend and part of our family. He will never be forgotten."

Meanwhile, Shelby American, Inc., now headquartered in Las Vegas, continues to build authentic continuation Shelby Cobra vehicles. It also offers the best and most exciting contemporary American muscle cars on the road, such as the post-title Shelby GT500 “Super Snake", Shelby GT-350 and the Shelby GTS. Joe Conway, President of Carroll Shelby International, Inc. and board member, John Luft, President of Shelby American, Inc. and Tracey Smith, President of Carroll Shelby Licensing, Inc., combine to bring a formidable team of experience and dedication in carrying out Carroll Shelby’s visions for the future. “We are all deeply saddened, and feel a tremendous sense of loss for Carroll’s family, ourselves and the entire automotive industry," said Conway. “There has been no one like Carroll Shelby and never will be. However, we promised Carroll we would carry on, and he put the team, the products and the vision in place to do just that."

“Carroll was a visionary who never stopped seeking ways to build faster, better cars," noted Luft. “He was actively involved in each of the models we build today, the development of our parts business and each of the cars scheduled to be introduced over the next few years. Carroll Shelby was the ultimate competitor and his spirit will continue to guide our company."

Shelby considered his greatest achievement to be the establishment of the Carroll Shelby Foundation™. Created in 1992 while Shelby was waiting for a heart transplant in the hospital, the charity is dedicated to providing medical assistance for those in need, including children. The Foundation also supports educational opportunities for young people through automotive and other training programs and benefits the Carroll Shelby Automotive Foundation.

“Carroll formed a foundation to give something back to those who have not been as fortunate as him, in both medicine and education," explained Carroll Shelby Foundation Board Member M. Neil Cummings, Esq. “The Foundation is well endowed to continue Carroll’s vision."

Shelby remained active in the management of each of his companies and the Foundation until his death, even though he endured both heart and kidney transplants in the last two decades of his life. An innovator and pioneer, he achieved an almost mythical status that never diminished. He traveled the world, socialized with movie stars and beauty queens, made and lost numerous fortunes, won races, built cars and lived large.

Shelby is survived by his three children Patrick, Michael and Sharon, his sister, Anne Shelby Ellison of Fort Worth, six grandchildren, four great grandchildren and his wife Cleo. Funeral plans are not immediately available. In lieu of flowers, the family asks that donations be made in his name to the Carroll Shelby Foundation (www.cscf.org).