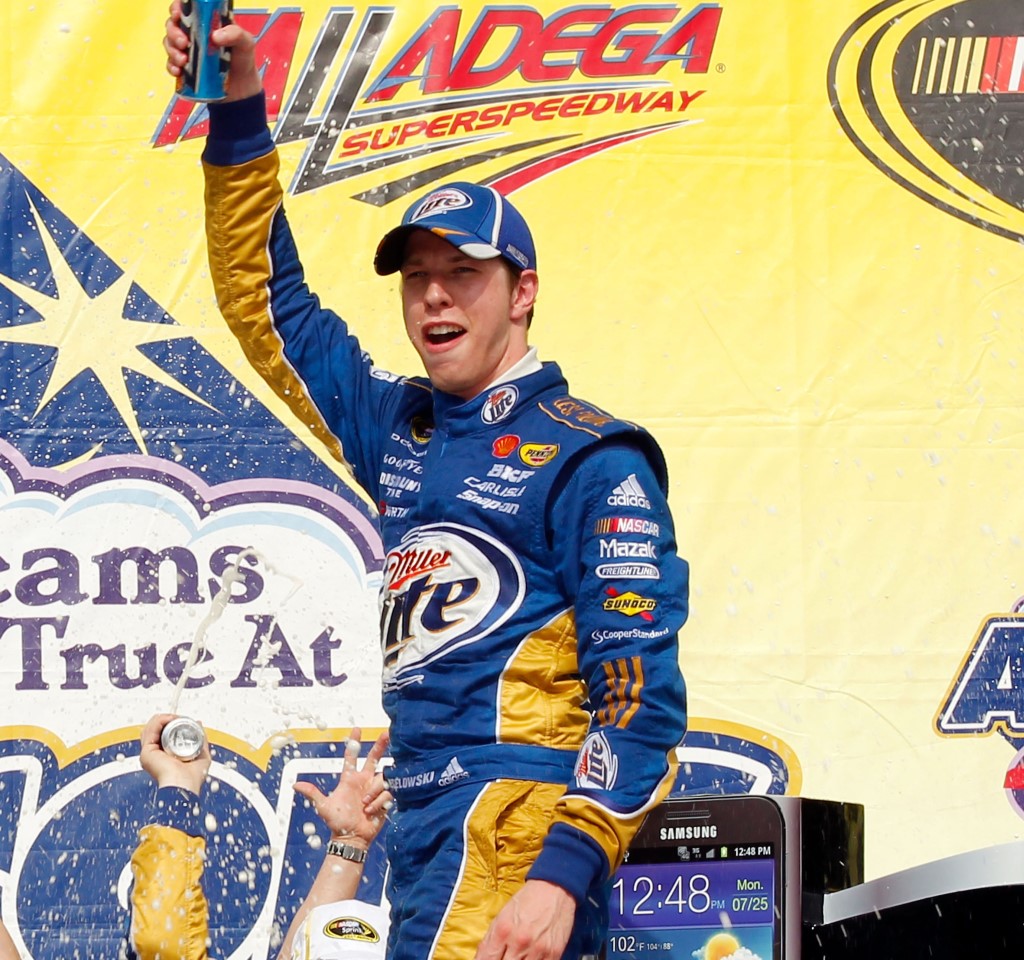 Kyle Busch pushed Brad Keselowski around the outside of the Fords of Matt Kenseth and Greg Biffle with one lap to go and the tandem pulled away with Keselowski's Dodge crossing the line ahead of Busch's Toyota.

Busch's Toyota could not stay with Keselowski over the final 1/4 lap as the Penske Dodge just walked away from the Toyota despite the draft. Kenseth held on for third and led the most laps.

It was Keselowski's 6th Sprint Cup win and 2nd in the last ten races.

Busch had pushed Keselowski to the lead on Lap 193 of 194 in a race that went six laps past its scheduled distance at the 2.66-mile track. The two cars ran bumper-to-bumper until Turn 3 of the final lap, when Keselowski entered the corner high and dived to the bottom of the track, separating his No. 2 Dodge from Busch's No. 18 Toyota.

After he ditched his dancing partner, Keselowski pulled away as if he has nitrous oxide to win by 0.304 seconds, a relative whipping at a track where wins typically are measured in thousandths of seconds.

The victory was Keselowski's second of the season, second at the 2.66-mile track, the sixth of his Sprint Cup career and the first for Dodge at Talladega since Dave Marcis took the checkered flag 36 years ago.

Conventional wisdom says that the driver running second on the final lap has a much better chance to win a restrictor-plate race than the driver who is leading, but Keselowski had thought long and hard about what he would do.

"I had this whole plan if I ever got in that situation where I was leading," Keselowski said. "I thought about it and thought about it — dreamed about what to do — and sure enough, going into (Turn) 3, it was just me and Busch. And I knew the move I wanted to pull.

". . . I went into Turn 3 high and pulled down off of Kyle and broke the tandem up. That allowed me to drive untouched to the checkered flag. It wasn't easy to convince myself to do that, but it was the right move. I'm glad it worked."

After the race, Busch wasn't quite sure what had happened.

"I got to Turn 3, and I got disconnected from him, got unhooked," Busch said. "I hated that happened — thought we had a shot to win that thing. I'm not sure he (Keselowski) did anything.

"If he did, he's pretty smart, but I think our stuff just came unplugged."

Keselowski's victory ended a wild final quarter of the race, which produced four cautions in the final 45 laps.

As the field began a round of green-flag pit stops on Lap 143, a massive chain-reaction wreck in Turn 3 eliminated a handful of contending cars, including the No. 24 Chevrolet of pole-sitter Jeff Gordon.

Contact between the Ford of Aric Almirola and the Chevrolet of Dave Blaney triggered the crash, which also collected Martin Truex's Toyota, Carl Edwards' Ford and Juan Pablo Montoya's Chevrolet, among others.

"It was like a wreck at a stoplight," Edwards said. "Everybody started checking up and hitting each other."

With the herd thinned considerably, Paul Menard led the field to a restart on Lap 151. Hamlin, who had regained a lost lap as the highest scored lapped car when NASCAR called the caution on Lap 143, surged to the front, where he swapped the top spot with Brad Keselowski.

Kenseth restarted at the back of the field under a penalty for pitting too soon under the Lap 143 caution, but he quickly worked his way forward, wresting the lead from Denny Hamlin on Lap 167, with the Dodges of Keselowski and AJ Allmendinger lined up behind him.

Five laps later, Hamlin found an opening between Kenseth and Keselowski and took second, but a Lap 175 wreck that started when Casey Mears cut a tire, scrambled the field for a restart with nine laps left in regulation.

As the field crossed the finish line on Lap 181, contact from Keselowski's Dodge sent the Chevrolet of Kurt Busch spinning into the inside wall at the entry to Turn 1. Kenseth led the field to a restart on Lap 185.

The green flag lasted only moments. As soon as the cars crossed the start/finish line, Hamlin ducked to the inside, and Allmendinger tried to block the middle lane. The nose of Hamlin's car, however, was already inside Allmendinger's bumper, and contact between the two cars started a wreck that ruined the chances of Hamlin, Menard, Kevin Harvick, Tony Stewart and Michael Waltrip.

Note: Jimmie Johnson and Ryan Newman both exited the race with oil pump problems and finished 35th and 36th, respectively.