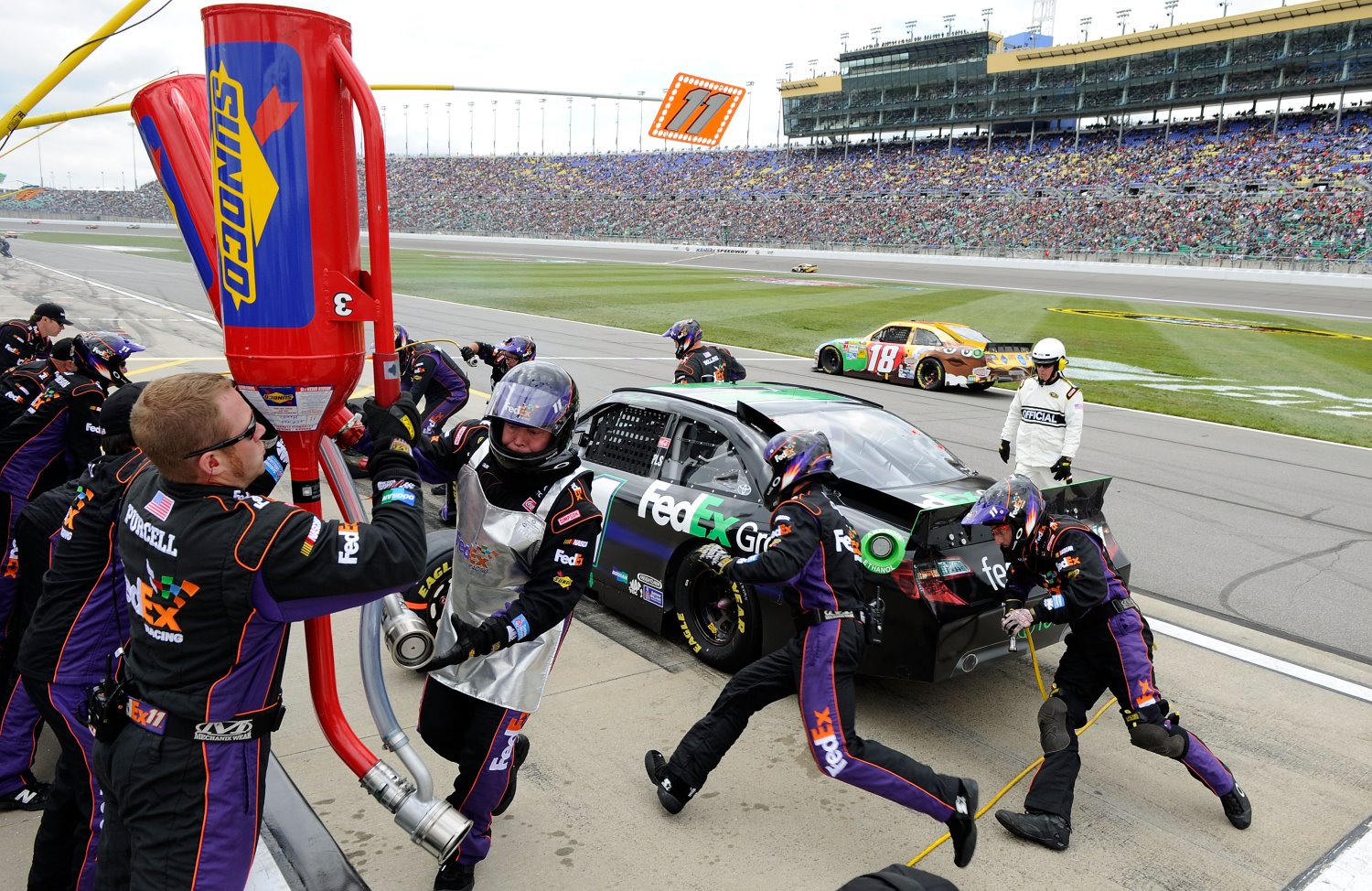 By the time the NASCAR weekend at the Kansas Speedway was complete, Denny Hamlin surprised the competition with a special FED EX delivery. Rick Hendrick had to load up his custom hats and wait for another day to make his special delivery. James Buescher and Turner Motorsports did some serious trucking and delivered in a very big way and, following the Kansas weekend, a contractor delivered a truck load of brand new asphalt. With those thoughts in mind, let's begin with:

THUMBS-UP to Denny Hamlin for his very impressive win at the Kansas Speedway. The STP 400 marked the driver's second win of the season which could guarantee him a wild card berth in the Chase if needed in September. It also marked Hamlin's 19th career Sprint Cup win and his first at Kansas. Hamlin also presented his team, Joe Gibbs Racing, with their 95th Sprint Cup victory. He joins Tony Stewart as the only repeat winner so far in 2012.

THUMBS-UP for Hamlin's victory setting a new record for NASCAR wins by a specific car number. Car #11, led primarily by the efforts of Cale Yarborough, now has 199 Sprint Cup wins. Hamlin's effort at Kansas broke a lengthy tie, at 198 wins, with car #43, led by the efforts of "King" Richard Petty.

THUMBS-UP to the level of competitive parody at the Kansas Speedway. 13 NASCAR Sprint Cup races at the track has now produced nine different winners. The level of competition was enhanced by the fact that the STP 400 only had three caution flags, that consumed 18 laps, which is a new track record. In turn that stat enhanced the average speed of the race, 144.126 MPH, which is also a new speedway record.

WHAT'S-UP with driver Martin Truex Jr really not wanting to hear about a THUMBS-UP for a job well done at Kansas. The driver of the #56 Michael Waltrip Racing Toyota led a race high 173 laps and was the class of the field all through the race. Unfortunately Hamlin ran him down, with approximately 31 laps remaining, and stole the win. The second place finish by Truex, who now has top ten finishes in the last five races, moved him to second in the championship points. However it was little consolation after not winning a race he felt was his and he admitted he had trouble sleeping after the race that night because he couldn't get the loss off of his mind. The overall improvements at Michael Waltrip Racing, from last season, has been a source of frequent conversation among NASCAR observers. It's just a short matter of time before Truex puts that Waltrip Toyota in victory lane. Truex probably put it best when he said: "it sucks, but to complain about finishing second shows you how far this team has come."

It was believed by racing observers that a late in the race change in the weather worked favorably for the Hamlin's car and worked against Truex. WHAT'S-UP with Mother Nature changing her mind with the weather forecast? Originally, the pre race forecast called for clear skies and temperatures in the low to mid 70's. What we saw was extreme clouds, temperatures in the 50's while the estimated 75,000 fans worried about being rained on.
The sunshine, and increase in track temperature, again played well for Hamlin.

WHAT'S-UP with super star team owner Rick Hendrick having to transport those custom race caps to yet another track? In October of last year Hendrick driver Jimmie Johnson gave Hendrick Motorsports their 199th Sprint Cup win at the Kansas Speedway. Hendrick ordered special hats to commemorate the milestone of winning a 200th race that everyone felt was coming very soon. He's still waiting to pass those hats out. They, once again, were packed away in a team hauler to be transported to the race in Richmond-Virginia this weekend. THUMBS-UP to Jimmie Johnson for doing everything he could to get his boss that win. Johnson wound up finishing third in the final rundown.

WHAT'S-UP with the green paint job on Johnson's #48 Chevrolet at Kansas? The color of the car was in honor of Earth Day and in conjunction with a green promotion by his long time sponsor Lowes Home Improvement Stores. With all due respects to the green people and their commitment to the environment, this was the ugliest shade of green ever placed on a car. Do you know what the prettiest shade of green was at the Kansas race? That would be the $248,691 Hamlin collected for winning the race.

THUMBS-UP to James Buescher for winning the SFP 250 NASCAR Camping World Truck Series race at Kansas. It's been a year of firsts for this talented young driver. He won his first NASCAR Nationwide Series race at Daytona and now has scored his first NASCAR truck series win at Kansas. Keep an eye on this young driver: we're going to be seeing a lot of him in the highlight reels during the years to come.

THUMBS-UP to Turner Motorsports who fielded the truck for the winning driver. It was the team's second, consecutive, truck win following the Kasey Kahne win at Rockingham.

WHAT'S-UP with Kyle Busch getting a "bugged eyed" condition during the race? We've seen that wild look in his eyes plenty of times in the past. Those moments were often fueled by anger management issues. His Kansas moment was fueled by rough track conditions that created a strong vibration in his car seat. Busch came over his car radio and said: "it feels like my eyeballs are going to pop out of my head." To his credit, Busch endured the shake, rattle and roll condition and finished tenth in the race.

Speaking of Kyle Busch, THUMBS-UP to the Fox Sports cameraman who, on multiple occasions, presented us with close up shots of Busch and long time rival Kevin Harvick involved in some intense side by side racing. It's well known that these two drivers are not on the same page and probably never will be. The sight of the two of them racing each other that hard created some fan excitement filled with anticipation over what could have come from those moments. Fox broadcaster Darrell Waltrip sarcastically quipped: "they're such close friends they just wanted to be together."

WHAT'S-UP with Juan Pablo Montoya and that in car radio tirade aimed at his team? The early part of the 2012 racing season hasn't exactly been a source of joy for this driver and his Earnhardt Ganassi Chevrolet team. In eight starts the team is sixteenth in the championship standings and only has one top ten finish. As that old NASCAR racing saying goes: "this is a lot better team than their numbers reflect."

Montoya's frustration, over the handling of his car, came early in the race when he said the car was becoming "!#%^&* annoying." On lap 188, Montoya brushed the wall and had to make an unscheduled pit stop. Montoya came over his radio and said: "yes, I hit the !#%^&* fence, I turned a fifth place car into a !#$%^&* 20th place car. Do whatever you !#$%^&* want, you don't seem to be paying attention anyway." It was the worst impersonation of Kurt Busch, circa 2011, that we've seen lately.

THUMBS-UP to the decision to begin the process of repaving the Kansas Speedway's surface as soon as the checkers fell on the STP 400. While many of the drivers would have preferred they leave the surface alone, the fact of the matter was: it needed to be done. Not only does the track get new asphalt but the turns will receive progressive banking.

WHAT'S-UP with a pot hole developing in the track surface during Friday's practice session? The track's maintenance crew patched it right away but, following the truck series race Saturday night, the patch needed another patch. THUMBS-UP to the speedway for having the foresight to stock a utility trailer with everything, from tools to asphalt, needed in case a pot hole developed during the Sprint Cup race.

THUMBS-UP to the Kansas National Guard who showed up with a tank to help tear up the track's surface after the race. THUMBS-UP to driver Brad Keselowski for staying after the race to help with removing the old asphalt. Many observers would probably state that giving Keselowski the keys to an Army tank might turn out be a WHAT'S-UP with major potential. Actually, it turned out to be rather funny and it turned up a great "Twitter" photo.