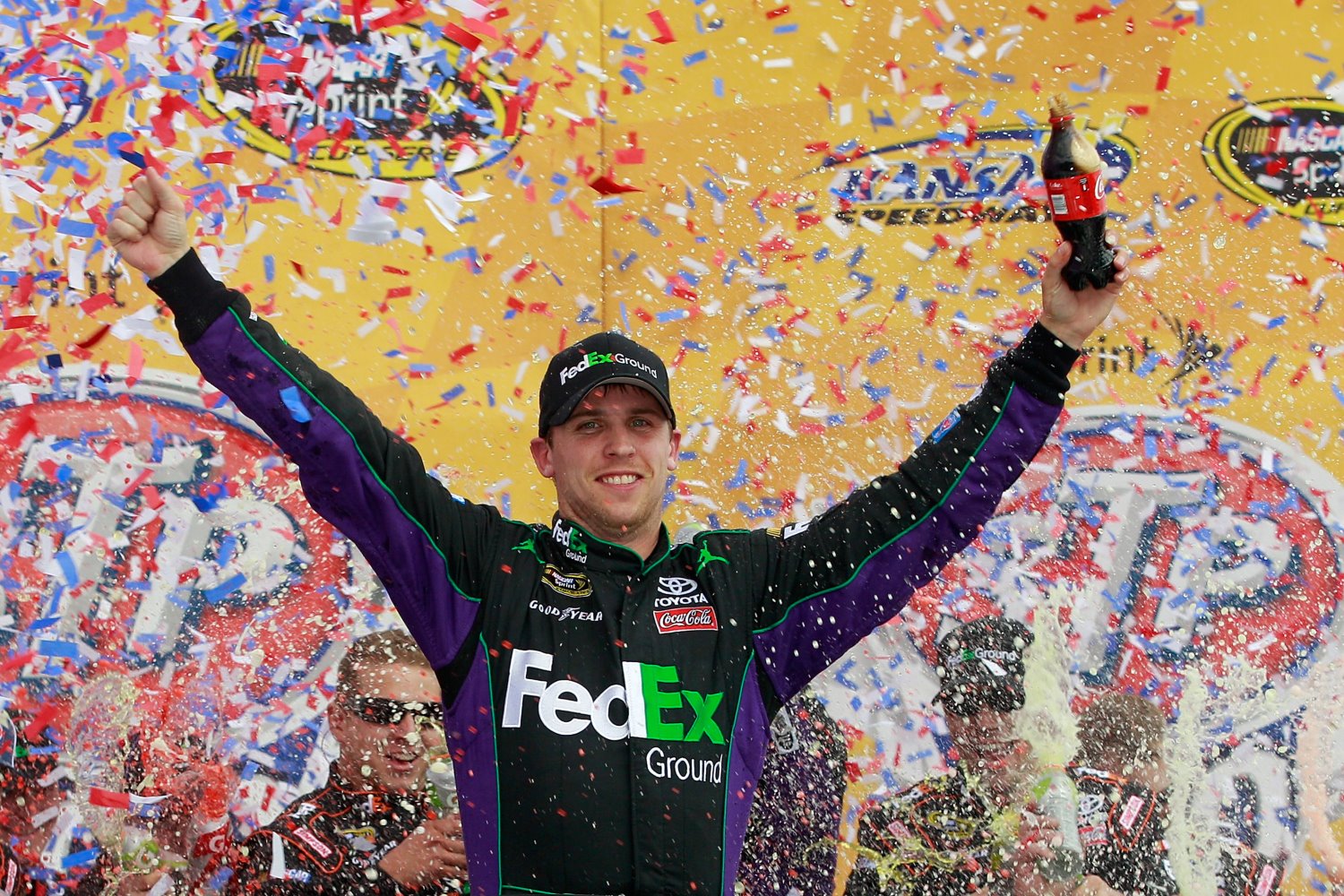 Denny Hamlin overcame a dominant day by Martin Truex Jr. to notch his second win of the season, grabbing the checkered at Kansas Speedway and gave Toyota 1-2 finish.

Taking advantage of changing conditions Sunday at Kansas Speedway, Hamlin held off Truex Jr. over the final 30 laps to win the STP 400, his second victory of the season, his first at the 1.5-mile track and the 19th of his career.

The victory was the 199th for cars bearing the No. 11, breaking a tie for the all-time lead with the No. 43, made famous by Richard Petty, who drove to 192 of his record 200 wins with that car number.

After a late round of green-flag pit stops put all the contending cars on the same sequence, the sun broke through the clouds for the first time all afternoon and changed the complexion of the race.

To that point, Truex had been dominant, having led 173 laps, but the changing conditions made Truex's Toyota "wrecking loose" in the words of the driver. Hamlin passed Truex for the lead through Turn 4 on Lap 237 and began to pull away, with Johnson pursuing from the third position.

To Hamlin, the sunlight was a welcome game-changer.

"We just needed some kind of change — weather or adjustments or something to get where he was at — and we kind of got both of them. In overcast conditions, the cars run a little bit tighter, the grip level's higher in the racecar, and it's more of a track-position type race. When the sun's out, the drivers, in my opinion, are more prominent.

"You move around, find the grip, do things in the car to make up for what you don't have. The slicker the conditions are, the better it tends to (be) for our race team. Luckily, we had that run in sunshine."

As clouds covered the sun once again, however, Truex began to close on Hamlin and widen his advantage over Johnson. With 10 laps left, Truex trailed Hamlin by .772 seconds. Five laps later, Truex had closed to .489 seconds behind.

Truex tried to dive beneath Hamlin in Turn 3 twice in the final three laps but couldn't stick the pass.

"Desperation," Truex said wryly. "I was a little bit faster than Denny at the end, but he was running against the wall right where I needed to be, and I was just trying to gain a little bit of ground.

"It was desperation — last-ditch effort — just trying something. There was no chance to make it work."

Though Truex's handling ills and Hamlin's surge to the front coincided with the appearance of the sun, Truex blamed his problem on a bad set of tires for the final run.

"I'm just not really sure what to think of that last set of tires," Truex said. "The car had been really good all day, we put the last set on, and I was just wrecking loose for the first 20 laps of that last run.

"Denny was able to get by me, and once he did, the race was over. The car got better longer in the run, and I was able to get back to him, but I'd get three or four car-lengths from him and pick up the aero push . . .

"I guess if we can be this disappointed with second, it kind of shows how far we've come as a race team."