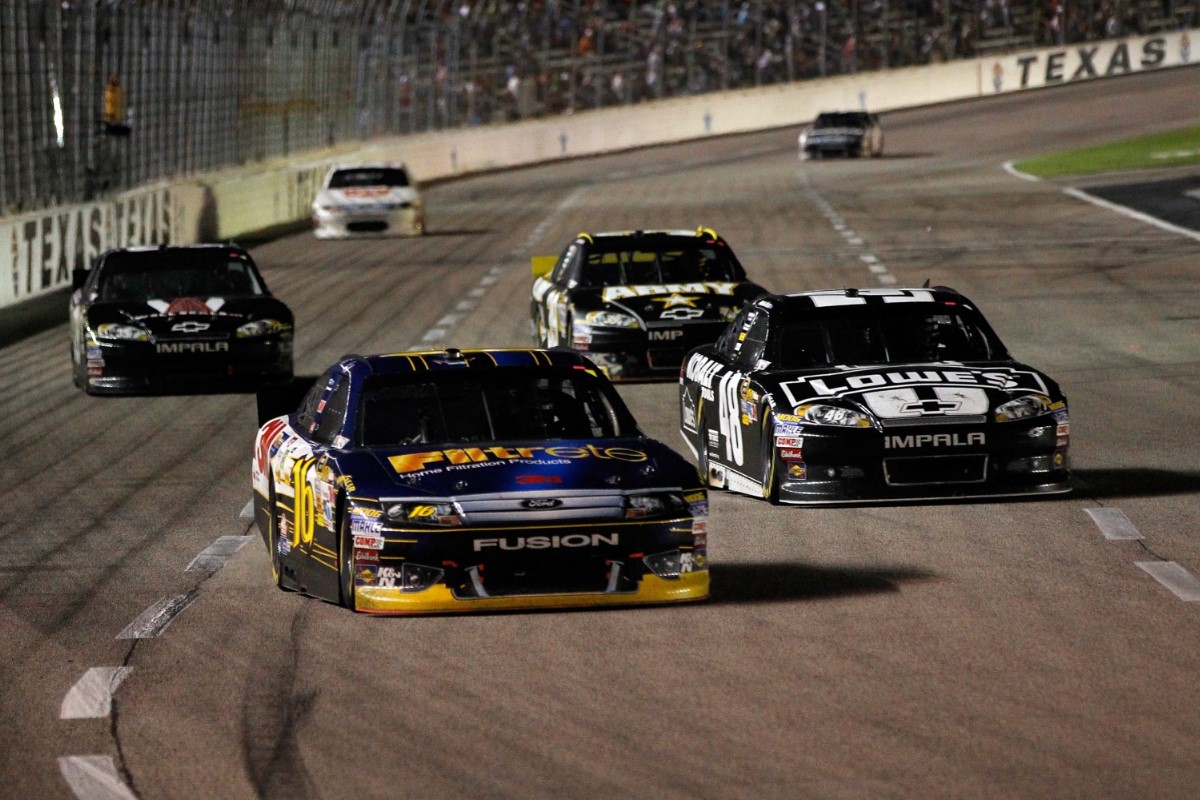 NASCAR's Nationwide and Sprint Cup Series spent made their semiannual trip to the Texas Motor Speedway to run races that were, frankly, a little light on the action side and that's putting it in very polite terms. When the strong wind gusts becomes the major story you know it's going to be a long weekend. Meanwhile in North Carolina, NASCAR returned to "the Rock" in what turned out to be the feel good story of the weekend. With those thoughts in mind, let's begin with:

THUMBS-UP to Greg Biffle for winning the Samsung Mobile 500 NASCAR Sprint Cup Series race. Another THUMBS-UP goes to this driver for that lap 304 beautiful slide job pass on Jimmie Johnson that ultimately became the racing winning move. It marked the "Biff's" 17 career win but, of greater importance it also eradicated a frustrating 49 race winless streak that dates back to October of 2010. The win also pads Biffle's Sprint Cup points lead to 19 over Matt Kenseth and Dale Earnhardt Jr.

THUMBS-UP to Matt Puccia for scoring his first ever win as a Sprint Cup crew chief. Biffle will be the first to tell you that the progress his team has shown so far in 2012 is in direct proportion to the job this new crew chief has been doing. THUMBS-UP to the "Pit Bulls", the name of Biffle's pit crew. Their performance on pit road during the Texas race was also a major factor in this win.

WHAT'S-UP with Jimmie Johnson scraping the wall during the final laps of this race while trying to catch Biffle? Actually Johnson was giving it his all to win this race when he sailed a little high in the turn. His Hendrick Motorsports Chevrolet was strong all night and led a race high 156 laps.

WHAT'S-UP with Rick Hendrick's custom racing caps being not being distributed? These are the famous hats that commemorates Hendrick Motorsports' 200th win. Johnson gave his boss win #199 last Fall at the Kansas Speedway. Those hats have been transported from track to track ever since waiting for that big 200th moment. The good news is the fact that the Sprint Cup Series will be racing at Kansas next weekend and hope springs eternal.

A THUMBS-UP for turning chicken salad into chicken do do goes to Hendrick Motorsports driver Jeff Gordon who was understandably frustrated with his car following practice and qualifying at Texas. Despite starting an uncharacteristic 34th in the field Gordon, with some good pit calls, drove his way to a fourth place finish

THUMBS-UP to Hendrick team mate Kasey Kahne who had an outstanding weekend. Kahne deserves the iron man award for running three races in three days at two different race tracks in two different states. Kahne's excellent weekend began during the Friday night Nationwide Series race when he drove a Turner Motorsports Chevrolet to a solid third place finish. On Saturday night he drove his Hendrick Chevrolet to a seventh place finish in the Cup event. This was huge for this team. Their slow start and horrible racing luck during the still early portion of the 2012 season has been well documented. After the Cup race, Kahne hopped a flight to North Carolina, slept approximately four hours, and then climbed into a Turner Motorsports Chevrolet Truck where he won the NASCAR Camping World Truck Series debut at the Rockingham Speedway. Job well done Mr. Kahne.

WHAT'S-UP with the engine woes displayed by the Penske Racing Dodges during the Texas weekend? Penske Driver Brad Keselowski had a devastating weekend that began with the Nationwide Series race where a faulty distributor led to a 35th place finish, 41 laps down. Then during the Cup race, Keselowski's team was hit by a fuel pick up situation that forced NASCAR officials to order him to leave the track because his car could not maintain minimum race speed. The result was a 36th place finish and a devastating hit in the points. This team has been hampered with fuel pick up problems in the past, most notably at Las Vegas, and, in the days that followed the Texas race, it was revealed that they have been doing some research and development work in this area. Paul Wolfe, Keselowski's crew chief, probably put it best when he said it was time to get back to basic fundamentals and "it's time to end the science project."

WHAT'S-UP with the frustrating Texas weekend experienced by Tony Stewart? It began with a crash during practice and the necessity of rolling out a back out car. Once the green flag fell on the Cup race, Stewart's car was just plain bad and stayed that way all night long. By the way, this was the same car that Stewart used to win races at Texas and Kansas last year. He wound up finishing 24th, two laps down. During the race there was a "Twitter" message sent that said: "#14 is coming in, (the pits), for fuel, tires and an exorcism on the car."

WHAT'S-UP with Marcos Ambrose running out of fuel during the final half lap of the race? It deprived the Richard Petty Motorsports driver of a certain top five finish that turned into a 20th place finish.

Okay, let's get to what a lot of you are thinking regarding the NASCAR weekend in Texas: (ZZZsnoreZZZ). WHAT'S-UP with both of these races being so tedious that it actually appeared like a lengthy game of follow the leader? This was totally uncharacteristic for any races we've seen at Texas in the past. The final 234 laps were run under green with the only highlight being Greg Biffle aforementioned slide job pass on Jimmie Johnson. Also unexpected was the race only having two caution flags, that took up ten laps, reported to be a track record which in turn led to a high average race speed, 160.575 MPH, also a new record. According to official NASCAR reports, the Samsung Mobile 500 Cup race took three hours and seven minutes to complete. Frankly, it felt like 37 hours.

WHAT'S-UP with the Fox Broadcasting team focusing a live camera on David Reutimann's car while again bringing up what happened at the April 1st Martinsville race? This, of course, was the incident when Reutimann's car lost power which brought out a yellow flag that changed the complexion of the race ending. While commenting on this, Fox actually show the video from that incident. Really guys? Martinsville video highlights in the middle of the Texas race?

WHAT'S-UP with the first caution flag of the race being for debris which turned out to be a racing cap blowing across the track? In all fairness, one has to consider the possibility that the strong wind that night in Texas may have sent that cap flying off of a fan's head and onto the speedway. But it didn't take very long for the NASCAR theory conspiracists to point out that Sprint Cup drivers keep their sponsor's race hats in their car so they will have them for post race interviews. Does anyone really think that a Sprint Cup driver would toss a cap out a window for a needed caution flag? Really?

On the topic of strange objects making a surprise appearance, WHAT'S-UP with that plastic bottle of water landing on the track that was totally annihilated by Juan Pablo Montoya's race car. THUMBS-UP to the Fox camera operator for giving us a beautiful live shot of the bottle getting mashed by Montoya's left front tire.

WHAT'S-UP with the turn three lights going out, due to a burned out electrical breaker, during the Nationwide Series race? THUMBS-UP to speedway electricians for replacing the breaker in less than ten minutes despite the pressure of being watched by live television cameras. THUMBS-UP to the decision to replace all of those breakers after the race so it wouldn't happen again during the Cup race the following night.

WHAT'S-UP with Texas sized wind gusts, reported to be as high as 40 MPH at times, becoming a major story line during the race weekend? Talking about breaking wind, consider these examples:

The wind was so strong that drivers complained of muscle aches in their arms from manhandling their cars while trying to drive through the gusts.

The wind was so strong it blew an antenna off of the pit box set up for Matt Kenseth. The team went several laps without timing and scoring data on their computers.

The wind was so strong King Richard Petty had to leave his famous cowboy hat in his motor coach and wear a racing cap instead.

The wind was so strong the speedway flags were standing straight out looking like they had been heavily starched at a local dry cleaner.

The wind was so strong that the front grills of the race cars were frequently covered with flying paper debris. This prompted the Fox broadcast team to comment: "a piece of paper worth five cents could damage a $200,000 race car."

But, when it comes to Texas sized wind stories, the best one of all was the $100 bill that was found plastered on the front grill of Kevin Harvick's Budweiser Chevrolet. It's not certain how many laps Benjamin Franklin spent riding with Harvick. This Richard Childress Racing team deserves a THUMBS-UP for donating the bill to the MRO, Motor Racing Outreach Program, which caters to the spiritual needs of the NASCAR community.

On a far more serious weather matter, the community of Arlington-Texas was devastated by tornadoes back on April 1st. A double THUMBS-UP goes to all of the drivers, team members and fans who contributed to a special fund to assist the victims during their time of need.

On the topic of showing some love, THUMBS-UP to driver Marcos Ambrose who donated his time to the Third Annual Hammering For Habitat sponsored by Stanley Tools, Do It Best Corporation and Habitat For Humanity. Ambrose helped build a home for a Fort Worth-Texas based single mom and her four kids. It turned out that NASCAR's favorite "Aussie" used to be a carpenter before he took up the racing business.

THUMBS-UP to the Rockingham Speedway for a very successful Sunday afternoon that saw the return of NASCAR racing to the famed North Carolina one mile oval. The Good Sam Roadside Assistance 200, NASCAR Camping World Truck Series, race was outstanding and well attended by a lot of fans happy to see NASCAR's return to "The Rock." The last NASCAR sanctioned event there was back in 2004.

THUMBS-UP to speedway owner Andy Hillenburg who made a very ambitious move by purchasing the Rock back in 2007. He reopened the speedway with regional touring events, such as the ARCA series, and leased the track to film companies and NASCAR teams for test sessions. Hillenburg worked hard to make his investment work and now every one's saying that the success of the NASCAR Camping World Truck Series debut is a triumph he richly deserves and it could happen to a nicer guy.

THUMBS-UP to the local Rockingham church whose Pastor rescheduled its Sunday morning service to an 8:30 am start so his congregation could get to the race track on time. Now that's a NASCAR true blue fan.