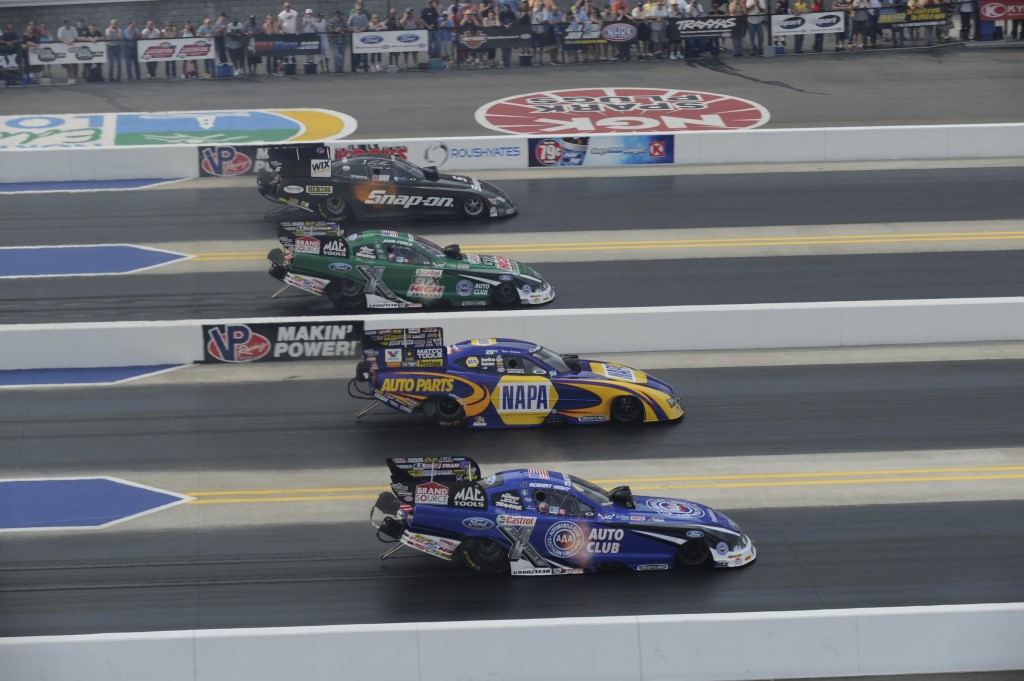 The dominant start of the 2012 season continued for Funny Car racer Robert Hight when he scored his fourth win in five races at the NHRA Four-Wide Nationals at zMAX Dragway. Spencer Massey in Top Fuel and Greg Anderson in Pro Stock also secured wins at the fifth race of 2012 in the NHRA Full Throttle Drag Racing Series.

Auto Club Ford Mustang driver Hight becomes just the fifth Funny Car racer to win four consecutive events in NHRA history, joining the ranks of Don Prudhomme, Kenny Bernstein, his team owner John Force, and Cruz Pedregon, who he defeated in the finals to accomplish the feat. Hight used a reaction time of .058 seconds at the start of his 4.076-second pass at 314.83 mph to secure his 27th career win.

“This is unbelievable. This class is so tough. Racing those three guys in the final, Cruz, Capps, Force, those guys are all hall of famers. They’re definitely guys that I grew up watching, and they all have more wins than me, so just to be out there racing those guys and to actually beat them is unbelievable," said Hight.

“To win one of these races is tough, and to have four in a row, it’s stuff that you don’t even dream about. I don’t see why we got to stop here, right? That was a 40-point swing for us in the final. That’s gaining 40 points on everybody but the runner-up. That’s big time. I want to keep this going. It’s not that easy to win out here, so you don’t want to give this up. You may never win another one."

Massey is also enjoying a strong start to the season when he notched his third win of the early season. Massey and his FRAM/Prestone dragster, has yet to lose in a final-round appearance this year, and his 3.802-second pass at 332.18 was able to defeat his Don Schumacher Racing teammate Tony Schumacher in the U.S. Army Top Fuel dragster. Massey also set the national speed record with his speed of 332.18 mph, and he takes over the points lead from teammate Antron Brown.

“It’s unbelievable. Starting out running 328 mph in qualifying and then coming up this morning and blistering a 330 and then just trying to go down the racetrack in the final and running 332; we were just trying to go A to B and make them beat us. When I went across the finish line, I didn’t know who won until I made the turnoff, and it wasn’t until they were giving me the trophy that they told me I’d run 332 mph. That’s unreal. It just shows you how awesome this Prestone and FRAM team of Phil Shuler and Todd Okuhara is running," stated Massey. “The car always pulls hard on every run, and on that 332, it never let up. It pulled as hard at the finish line as it did at 330 feet. You know you’re on a good run when it does that. You just have to be focused on the starting line and have your head in the game. It’ll show you which driver knows what’s going on at the Four-Wide Nationals. I love it."

This was the second NHRA Four-Wide Nationals win for Anderson, who calls Charlotte home for himself and his race team. The driver of the Summit Racing Equipment Pontiac GXP held off a hard charging Erica Enders in her GK Racing Chevy Cobalt. Enders is working to become the first female winner in the NHRA Pro Stock category. The 6.540-second pass at 212.23 powered him to his 72nd career win and adds to his points lead in the category.

“I am off to a good start this year. I’ve been in three finals, and leading the points. I have a great race car, and Jason has a great race car. The Summit team is on fire. These are two of the very best cars we’ve had," said Anderson. “When you’re racing four wide, you always feel like an underdog. Even if you have the fastest car, you have guys who cut .00 lights every time, and let’s face it, I’m not one of those guys. I’ve complained about this [four-wide] concept, but I guess it’s time to embrace it."

Mike Castellana was awarded his third NHRA Pro Mod Drag Racing Series ProCare Rx victory in a single pass during the final round after his competitor was unable to make it to the starting line. Castellana was to face Leah Pruett in the finals, but she suffered extreme engine damage in the semifinals, and her team wasn’t able to fix the car in time for the final.

This was the second consecutive final-round appearance for Castellana, who was defeated in Gainesville by Rickie Smith. Castellana faced Smith in the quarterfinals during eliminations on Sunday and was able to avenge his loss at the prior event. Castellana also defeated Chip King, and the No. 1 qualifier of Danny Rowe en route to the finals. With the win, Castellana takes over the point lead from Smith.

The NHRA Pro Mod Drag Racing Series presented by ProCare Rx will next be in action in Houston.