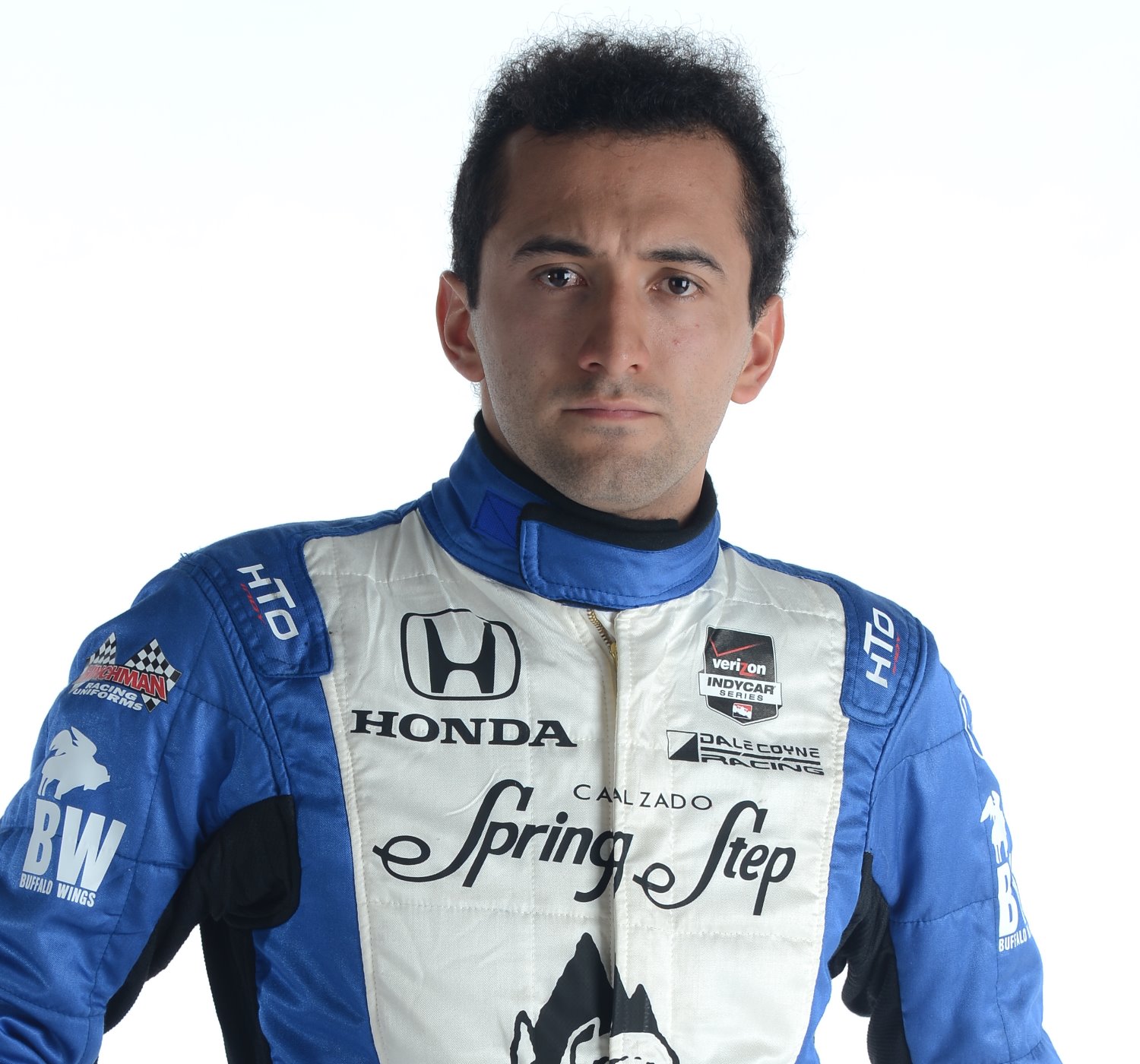 One thing we forgot to mention yesterday is that Carlos Huertas will drive for Dale Coyne Racing this weekend at Texas Motor Speedway. If you remember, the 22-year old Colombian was confirmed at the beginning of the season to contest all the road and street course rounds. Huertas, of course ran the Indy 500, and it looks as though he may in fact run all the ovals. For now, he will in the car this coming weekend at Texas.

Also, Pippa Mann, who ran a third Coyne entry at Indy, may still run the remaining Triple Crown races (Fontana and Pocono) for DCR later in the year. However, Mann will not run TMS for Coyne this weekend, as she did in 2013.

We're minutes from the green flag of the Verizon IndyCar Series race here in Detroit. I figure it’s a good time to catch everyone up on some of the happenings here at Belle Isle.

To start, we bumped into James Davison about a half hour ago. The Aussie, who finished 16th in last week's Indianapolis 500 is of course running a full season with TRG-AMR North America in the Tudor United SportsCar Championship. I asked him what his prospects were for running more IndyCar races this season. He noted that nothing was imminent but that he was continuing to work with his sponsor Always Evolving, a motorsports, merchandise, and lifestyle company, that is emerging as an automotive entertainment brand. Always Evolving, of course, sponsored Davison at the Indy 500.

We also ran into Dale Coyne on pit lane before the race. As he did last week in Indianapolis, Coyne complimented his rookie driver Carlos Huertas. The Colombian scored a career best 8th place finish yesterday, and is one of three drivers to have completed every lap of competition in 2014.

When asked if Oriol Servia might be doing more races for his team in 2014, Rahal Letterman Lanigan Racing co-owner Bobby Rahal was non-committal. The three-time CART champion and 1986 Indianapolis 500 winner simply said the team was "trying to find money."

Last, we had the pleasure of speaking with 2013 Indy Lights champion Sage Karam, who scored an impressive ninth place finish in his Indy 500 debut last week. When asked if he might be running some additional IndyCar races in 2014, Karam was optimistic about his prospects. While he was not sure if it would be with Ganassi, or Ganassi in combination with Dreyer & Reinbold/Kingdom Racing, Karam wasn't sure.

When asked which event he might run, Karam, who is from Nazareth, PA mentioned Pocono. He also brought up Iowa and Milwaukee, two tracks he's had success in The Mazda Road to Indy. As for another possibility? Karam mentioned Sonoma, in part, because there would be a test day in advance of that race.

The command to start engines should come shortly.

Verizon IndyCar Series qualifying for today’s round 2 of the Chevrolet Indy Dual in Detroit Presented by Quicken Loans just concluded. Takuma Sato won pole with a blistering lap of 1:16.1371, and will start first for the second time in 2014.

Second-place starter James Hinchcliffe also met with the media. The Mayor of Hinchtown was pleased with the team’s pace yesterday, and believes the sixth-place finish was a function of untimely cautions.

Speaking of untimely cautions, NTT Data Chip Ganassi Racing driver Ryan Briscoe was leading yesterday, but had to pit with 8 laps remaining. Briscoe believes the team could have finished in the top-3 if not for the untimely caution. Look for a strong showing from the Aussie today, who looked quietly confident when meeting with the media.

Prior to qualifying, we spent a good part of this beautiful morning roaming the paddock here at Belle Isle and came up with some interesting nuggets. You’ve already read that Mikael Grenier may run Mid Ohio and Sonoma later this year.

We also learned that the rumored street race in Dubai next season is close to becoming a done deal. Apparently, all the involved parties are working out final details, one of them being sourcing. Questions such as who will supply equipment, how the race facility will be erected, and where exactly that funding will come from are all under review right now. However, the fact they are discussing such topics would indicate that some terms have been agreed upon in principal. We imagine something official will be known by the end of June.

Also, one team owner told me that he believed things were genuinely on the up-and-up with IndyCar. The owner said that Hulman & Co. CEO Mark Miles has done a great job engaging the different constituents within the sport and getting them to pull in one direction. He noted how other owners like Roger Penske and Michael Andretti were doing a great job with promoting events, and said things would not improve overnight, that he was as optimistic as he had been in a long time about the sport.

Last, if you remember from my Good Morning from Detroit, Hot News post, I spent some time chatting with some of the Schmidt Peterson Motorsports crew. To put it lightly, the SPM team is a little steamed from some of the happenings yesterday. If you remember, Simon Pagenaud was penalized in qualifying for impeding Team Penske’s Juan Pablo Montoya. Then in the race, Pagenaud made contact with Montoya’s teammate Will Power, ending the Frenchman’s day.

Pagenaud’s teammate Mikhail Aleshin also had contact with James Hinchcliffe and Montoya. But particularly upsetting to the SPM crew was Aleshin was given a penalty for blocking Takuma Sato, who was four laps down at the time. In the opinion of the team, Aleshin moved to the inside of the track to avoid the water run-off from one of the tire barriers.

To paraphrase, one of the team members told me “the series floods the track with water, we move to avoid the water and get penalized for blocking a car 4 laps down?" He continued, “why weren’t the Verizon cars penalized for putting us in the wall?"

While this was not stated specifically, I took that to be an implication that the two cars carrying the series’ title sponsor logos were getting some preferential treatment.

That could be a stretch. But given the run-ins between Power and Pagenaud this season, and the events of yesterday, there is some bad blood between the Penske and Schmidt teams. We’ll see how that plays out this afternoon.

Regarding Hinchcliffe, the second-place grid position was his fourth such qualifying effort this season. Hinchcliffe noted that qualifying was a focus for him this offseason, noting that "Ryan [Hunter-Reay] kicked his ass," last season. And although the finishes have been disappointing, the Canadian seems to be happy with where the team is qualifying-wise. Might we see a strong performance from The Mayor this afternoon?

We also had the chance to catch up with former Belle Isle IndyCar winner Robby Gordon, who is running in his Stadium Super Trucks Series this weekend. SST, of course, has accompanied IndyCar at numerous events so far, and Gordon believes the short, action-packed races are a perfect compliment for IndyCar.

Defending series champion Scott Dixon was disappointed with his tenth-place qualifying effort earlier. Word has it, that a major change was made to the shocks shortly before this morning's qualifying session, and there is one particularly unhappy Kiwi in the paddock.

We also hear that IndyCar is considering a move to stock-block engines, likely as a means of attracting manufacturers such as Ford. Although Ford recently made intent to not participate in IndyCar clear, the Blue Oval has stated its preference for production-relevant in the past. And production-relevance is something the manufacturers want more of a direct tie to these days.

That said, we're not sure this is the best idea. The old stock blocks were terribly unreliable in Indy Car racing, when they participated in the 1980s and 1990s. One IndyCar media member noted how they "use to spill their guts all over the track, putting lots of oil down, trying to keep up with proper race engines."

Last, one member of the travelling IndyCar media tells us that the shuttle buses are flowing much better this year and traffic getting onto and off of Belle Isle much smoother. Of course, it should be noted, that this particular individual actually parked in the general parking area, and spoke to many of the race goers, as this individual's boss did not reserve credentials in a prompt manner.

And yes, names have been withheld to protect the guilty.