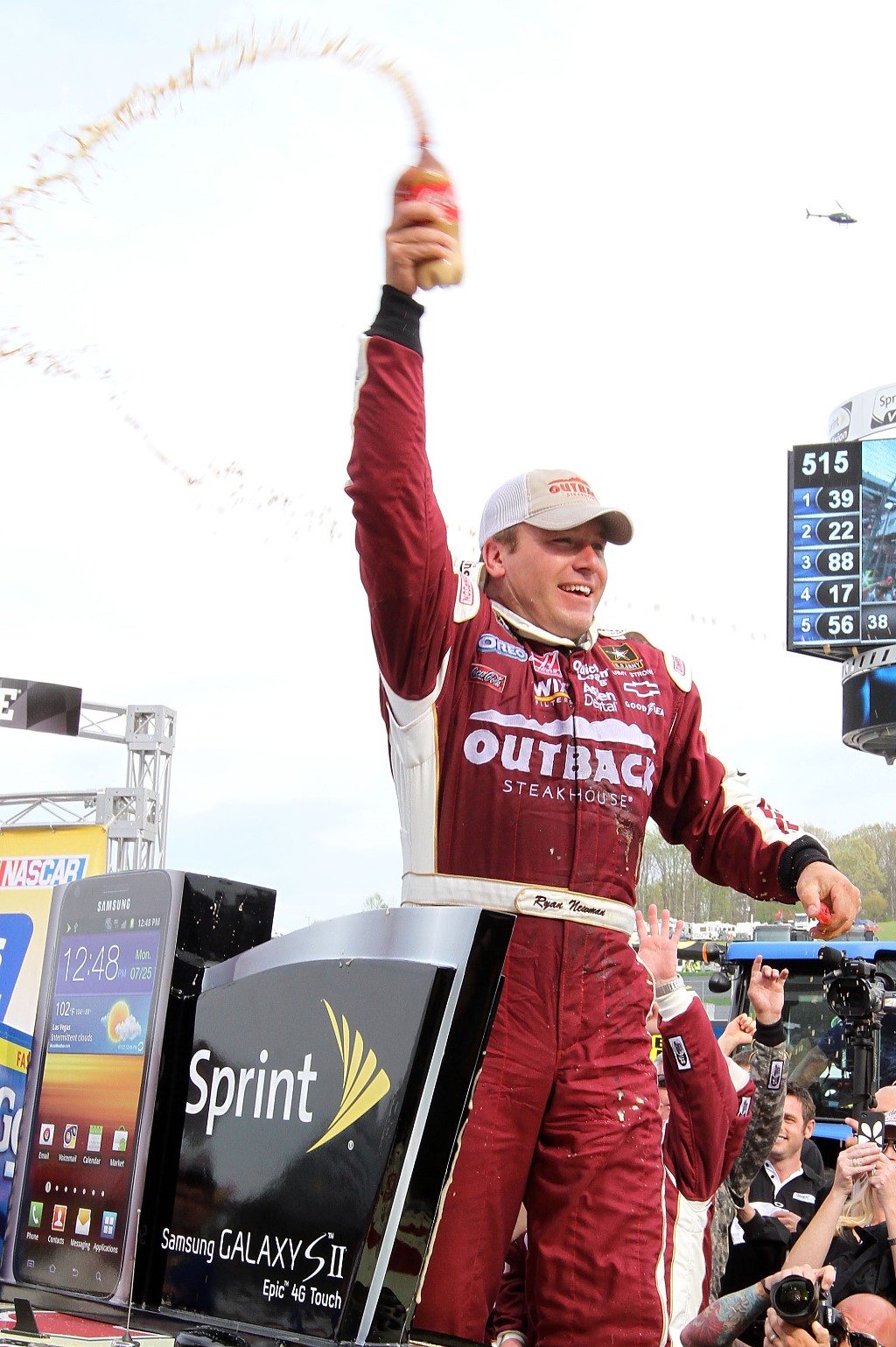 Ryan Newman scored a surprise victory in a wild finish in Sunday’s Goody’s Fast Relief 500 at Martinsville Speedway after an ill-fated three-wide pass for the lead took each of the race leaders out of the running with two laps to go.

Rallying from an early pit road penalty that put him a lap down, Newman slipped by the carnage and inherited the lead for the second attempt at a green-white-checkered finish and held off A.J. Allmendinger over the final three laps to grab his first career Martinsville victory.

It all came down to being at the right place at the right time, as teammates Jeff Gordon and Jimmie Johnson tangled with Clint Bowyer on the opening three-lap dash to open the door for Newman to secure his 16th-career Sprint Cup victory and snap a 22-race winless drought.

“We were not a dominant race car today but we put ourselves in contention," said Newman. “For me to take us out of the game and we ended up going a lap down because of my speeding penalty, and the guys did an awesome job in giving us the car to make the changes.

“We have been in that position here and been in the wrong place at the wrong time and it's nice to be able to at least balance it out and get in victory lane. The way the strategy and everything worked out, coming in for two tires and Clint (Bowyer) kind of clearing out turn one for us, we were fortunate to be in the right place at the right time."

Much of Sunday’s race was a rather mundane, not-so-typical Martinsville race with only seven caution flags. But it was the last two caution flags that set the stage for what would be a memorable finish.

Gordon and Johnson had a stranglehold on the top position all day long, with Gordon – a seven-time Martinsville winner – leading a race-high 328 laps but spending the last nearly all of the last 100 laps chasing Johnson, who passed Denny Hamlin on lap 393 to grab the top spot.

With Earnhardt, Jr. running third, it looked as though the Hendrick Motorsports team was well on their way to earning team owner Rick Hendrick his 200th NASCAR victory when David Reutimann brought out the sixth caution flag of the day with two laps to go.

Coming to the yellow flag, Gordon just edged Johnson on the inside to be scored as the leader during the caution period, starting on the inside of Johnson for the three-lap shootout to the finish. Clint Bowyer restarted third behind Gordon, followed by Brad Keselowski, Newman, Earnhardt, Jr., Truex, Jr., Kenseth and Allmendinger.

At the leaders came through turn one on the first green-flag lap, Bowyer dived to the inside to make it three wide, too wide as it turned out. The three leaders bounced off each other, with Johnson spinning into the outside wall and Gordon spinning to the inside and into Bowyer.

Newman, hugging the inside line, slipped past Bowyer along with Allmendinger, while Earnhardt, Jr. slipped inside of Keselowski, bounced off Gordon and continued on in third place.

Gordon, Johnson and Bowyer were able to continue on – Bowyer finishing tenth and Johnson 12th with Gordon getting the worst of the deal, finishing 14th.

“I didn’t get the best restart," said Gordon. “The tires are really old. I spun the tires a slight bit. When I saw (Bowyer) go down to the inside of me I knew we were all in trouble. All I could do was just hold on tight. (Johnson) couldn’t go anywhere, I couldn’t go anywhere. He was just coming with so much speed. It won the race for Newman. Yeah, that’s Martinsville right?"

“We both come out losers in that deal," said Bowyer. “It was just a bad situation for everybody. I had a good day. Three of those Hendrick cars were the class of the field all day long. It’s the nature of the beast. I hate it for those guys. I hate it for our guys. We ended up 10th and should have been easily a fourth-place finish there."

Newman restarted in the top spot for the second attempt at a green-white-checkered finish with Allmendinger to his outside. The two ran door to door for the first two laps before Newman finally cleared him on the back straight on the final lap, winning by just over a car length.

After spending much of the weekend under the weather, Allmendinger was rewarded with a career-best finish, and despite coming within a few feet of winning his first Sprint Cup race, never put the bumper to Newman during the final laps.

“First time I've ever had a chance to win a Sprint Cup race, so I was going to do everything I could," said Allmendinger. “Why didn't I wreck him? He actually got a good drive off (turn) two. I would have had to wreck both of us to get into him in the three to get him.

I don't want to win like that. That's not the way I want to win a race. He did everything clean on the restart. He could have drove me off the racetrack, and if he would have done that then it's kind of like, okay, it's game on. And if he would have just drove into the corner, left side of me and got me out of the way, then I would have probably run into him. He didn't do that and he didn't deserve to get wrecked."

Hamlin was sixth followed by Tony Stewart, with Aric Almirola and Brad Keselowski finishing ahead of Bowyer to round out the top ten.

Greg Biffle finished 13th and held onto the points lead by six points over Earnhardt, Jr. with Stewart, Kenseth and Harvick making up the rest of the top five.