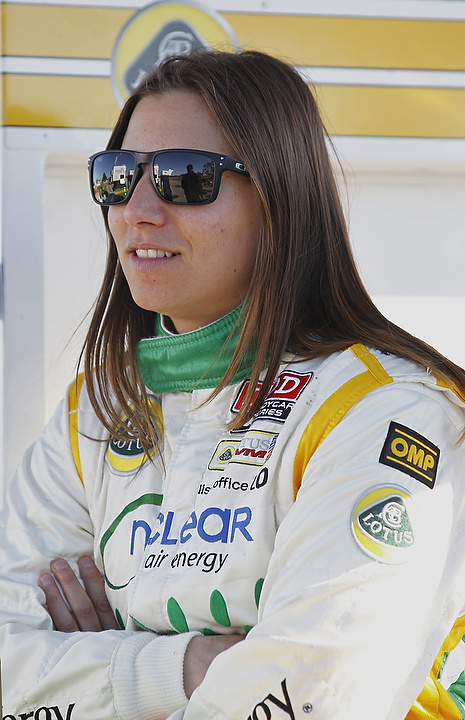 After the 2011 St. Petersburg IndyCar race, I thought I recognized the driving style of a new driver — bold, brash, and talented, fearlessly going against the big name veterans. This is Paul Tracy's driving style, I thought, only perhaps with bigger balls. Ironic, since I was watching Simona de Silvestro.

As the year went by, Simona impressed the IndyCar world in quite another way with her bravery, when her year went from good to bad, and at times, to disastrous. Bravery, after all, isn't the absence of fear, but rather the ability to function when one is scared witless.

Her new car — named "Janet" — that performed so well early in the season was destroyed in a nasty, fiery crash at Indy. Worse yet, Simona was badly hurt, receiving third degree burns to the backs of both hands. The week after Indy she was hurt again in a bad crash at Milwaukee, then missed the race at Iowa due her Milwaukee injuries. Her backup car weighed more than the newer cars — she named the car "Pork Chop" — and it wasn't competitive much of the time.

Since she didn't have the luxury of a backup car, she was forced into a very different driving style. While she put on a great fan-friendly show — for instance, referring to her bandages as "Mickey Mouse gloves" — the truth was that she was struggling. Simona sat down with AutoRacing1.com in an exclusive interview just before this year's St. Pete race, and talked openly about where she's been, and where she's going.

She continued, "We had so many races back to back, I never could really go away from it, and really think about what happened at Indy. And what happened at Milwaukee was just kinda like, the top of everything. We missed a race in Iowa, which was bad, but I think for me it was important to just kinda get away from it and really think about what just happened to me, and to start re-focusing." Without pausing — Simona rarely pauses when speaking — she added, "Qualifying the car at Indy showed me that I'm meant to be a race car driver."

One thing for sure is that her confidence is back. The burns are healed, the scars barely visible. She enjoys the complete confidence of her team, who seriously teases her. These people are having fun, and she's as devoted to her team as they are to her. She's also working with OMP on safety equipment — "Way more of me was on fire than just my hands" — including female-specific safety stuff.

The conversation continued: "The ovals still have my attention, especially with my experience on them. It's been a bit difficult. The road courses are just what my background is — I'm used to it. I know where the limit is on a road course, I know how to move the car on a road course, but on an oval I haven't really found it yet.

Kentucky was the first time I had a car that felt really good on ovals, and it was like life changing. It was like, 'Oh my God, this is awesome.' I was actually having a lot of fun driving it."

She keeps track of her old car, Pork Chop, with which she ran every race after the new car was destroyed at Indy. "We love Pork Chop," she said, commenting that the car was now painted in Tampa Bay Buccaneer colors and on display locally in St. Pete. She isn't in the mood to sell it back to the Andretti family, even if Marco got his first win in that car: "It's mine, it's mine for now, I'm sure he wants it but I don't think I'm gonna give it back!"

The new car doesn't have a name, since she's wondering if naming the car might jinx it, but she likes the new Dallara car a lot. "I think the new car is good. I really enjoy it, racing. The first couple of tests I did I really enjoyed it. Pretty much all the things are on like carbon brakes, hand clutch handling — it is what an open wheel car should feel like. I think now we have all these assets in it to make it a great car. I think there's so much potential in it. We have to find that window where the car wants to be fast…. There's so many changes we can do to it, it's interesting…

It's cool as a driver 'cause you can have a lot of input in it, even on the engine side. It's been so interesting to see what we can do with the engine and work with the Lotus people. It makes it really special for us." It didn't escape Simona's notice that, on that day, she was the fastest of the Lotus cars, faster than Oriol and Sebastian.

"Well, yah, you notice it a litttttleee bit (laughter)." "I think everyone in the series is really talented right now, and it's cool to have engine manufacturers, because you have competition with everybody, but you still wanna be the fastest of your clan. It's like a second competition added to it."

So would this racer, who while burned and bruised at Texas, Indy and Milwaukee got back into her car, consider running a USAC sprint or midget? The answer would be, uh…. No. "I've seen the cars, but they're too scary almost. They're really impressive to watch, but I think I'm gonna stick to open wheel a little longer. Its pretty gnarly out there!"

Which is okay — Jackie Stewart turned down a drive in a sprint car, and no one accuses him of cowardice. And come to think of it, Fangio left for home after only a few laps at Indy.