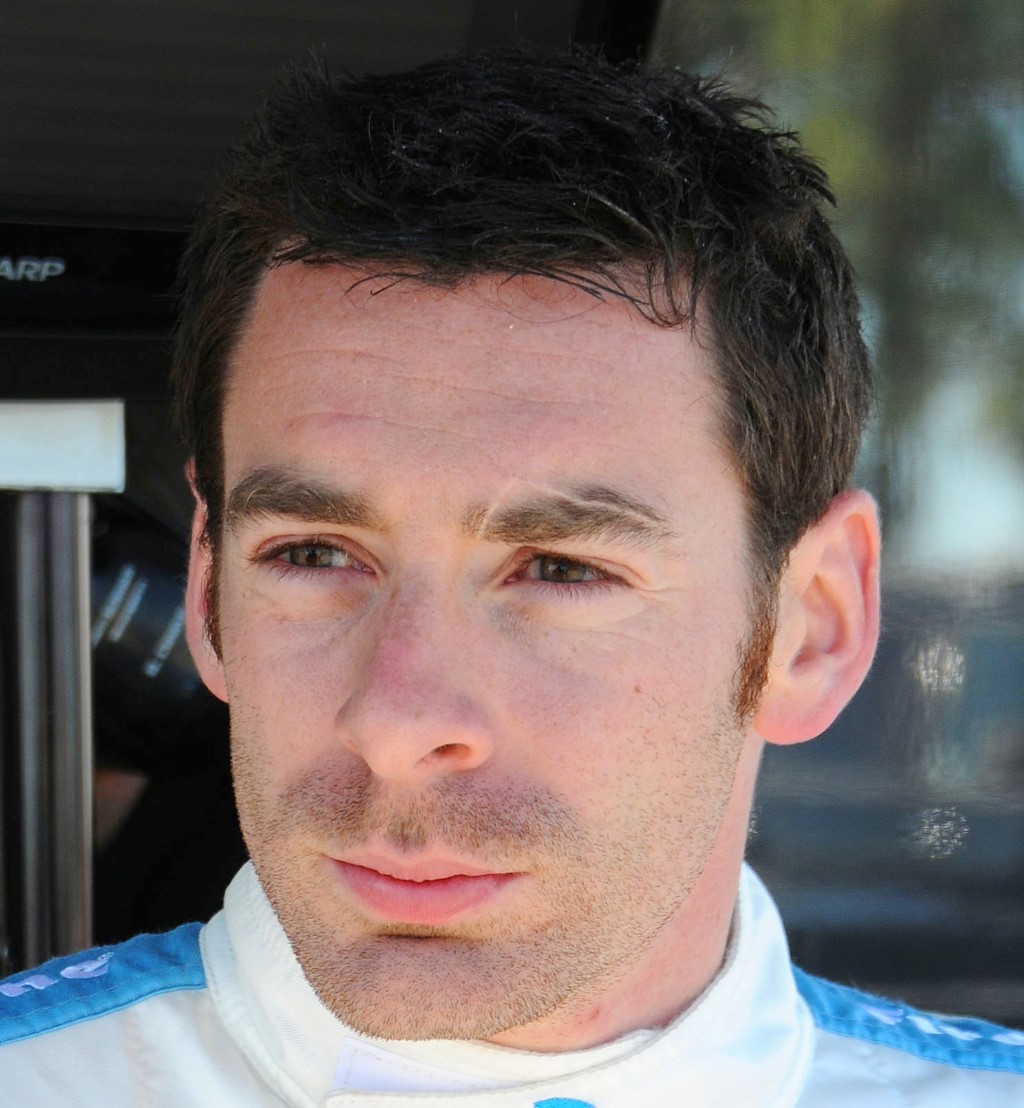 THE MODERATOR: Our guest today is the current leader of the Sunoco Rookie of the Year points standing, Simon of should made Hamilton motorsports. Thank you for joining us today.

Simon is the driver of the No. 77 Schmidtâ€'Hamilton HP Motorsports Honda in the IZOD IndyCar Series, and in his season debut with the team overcame a tenâ€'grid spot penalty and finished sixth at St. Petersburg.

Q. Talk about the race at St. Pete. Did you expect to make up all those spots?

SIMON PAGENAUD: That was scary to begin with. I mean, we had a great car, a great race car that we knew was our strength, and we wanted to do as well as possible.

So I went into the race thinking to go through turn one fine, and then from there work my way through. But I take my hat off to the team. We did a fantastic pit stop and strategy was pretty amazing and they really got me up there and we didn't make any mistakes. We got out of trouble and with what we had in hand, I think we got the best results we could achieve.

Q. Last year you earned your reputation as a superâ€'sub, and it was this race a few years ago you made your first IZOD IndyCar Series start filling in for Ana Beatriz. Talk about going to a track where you have some laps at the Barber Motorsports Park.

SIMON PAGENAUD: Yeah, we tested this winter, and we worked very hard on our mechanical setup, and I think we go into Barber with a very good spirit. I think we have got a good balance. We worked a lot on our grip level, as well.

And you know, I'm really looking forward to go there for the second time, and we'll see. It's a completely different racetrack to St. Petersburg. I know in St. Pete we had a really good race car. This time it's going to be a different beast.

But I think we did a good homework over the winter and you know, very optimistic about our chances there. I'm going to wait until the first practice to say what I this.

THE MODERATOR: A little offâ€'topic of racing, but you're known as Jean Girard after the character that Sacha Baron Cohen played in Talladega Nights. The race is in Alabama; do you think we'll see the Jean Girard impression this weekend?

SIMON PAGENAUD: Actually I'm very disappointed in Sacha, he said he was the actor in the movie but I was. He took all of the credit for it. I'll have to go after him. (Laughing).

Q. You were fast at the start of the weekend and you were maybe considered a surprise to make that Fast Six on Saturday, and then you backed it up; did you expect to be that good and that competitive out of the gate?

SIMON PAGENAUD: To be honest, I think â€'â€' thanks for asking me the question. To be honest, I knew we did a very good homework at Sebring and Barber over the winter. I knew my engineers have been really strong and they have been asking themselves the right questions.

So I knew it would be, you know, in the mix, but I was kind of surprised that right out of the box, we were out there already. It was a pleasing surprise. I think we can keep going that direction, because we have more in store. It's going to be a matter of executing every race and make it happen.

Q. I wanted to ask you one more thing. Gil de Ferran said that you were his dark horse pick for the championship. Do you think that you could be a contender in your first full year?

SIMON PAGENAUD: Why not? I think, you know, the chemistry on the team is pretty amazing. It's the first time in my career I've had such a great opportunity to showcase what I can do, but I'm also a lot more ready than I used to be in the past.

I think it's just very good timing for me, and if we keep doing what we are doing at the moment, then why not. I think we can definitely fight in the Topâ€'6 and if we are consistent, then maybe that would be good for being well placed in the championship.

Q. You kind of hinted about the difference between St. Pete and Barber, and it's really different tracks that the IndyCar Series has from airstrips to ovals to street courses. Do IndyCar drivers and crew chiefs adjust well to that kind of thing, and what's the best way for to you do that?

SIMON PAGENAUD: I think what I love about the Series this year is the disparity in the tracks; the fact that it's different kind of racetracks, street circuits, road circuits, ovals, makes the series exciting.

For me, there's a lot of things I don't know to be honest. The ovals, I've never had any experience, so I'm just going to try to adapt. Road circuit or street circuit, I have some good experience there.

But again, it's all about adapting and trying to do your best with your package, and that's really my attitude approaching the race weekend.

SIMON PAGENAUD: I'm sorry, I'm not sure I understand.

Q. Leadership skills; in other words, drivers have to take the lead with your team members, and if you have those kind of skills does that help you, do you think, at adapting to all of these different tracks?

SIMON PAGENAUD: I think the big thing that's happening at Sam Schmidtâ€'Hamilton at the moment is the motivation we all have to do well. I think there is a very positive attitude. I don't know if it's me bringing it or all of the people around me. I think it's a common attitude, and that's the right way to go racing.

I think we are just very happy to go racing, very happy to work all together, and it helps everybody to go forward. We are going to try to keep that spirit on. It's just â€'â€' yeah, it's the team attitude and atmosphere, and it's great to be part of it.

Q. Speak a little bit about Davey Hamilton and Sam Schmidt and working for them, how they motivate you.

SIMON PAGENAUD: Well, Davey was here this weekend, and, you know, obviously one of the comments was when we went on the Red tires, the car balance changed a lot but it was the same for everybody. I told that to Davey and straightaway Davey went to Firestone and asked them questions and he came back to me with answers.

It was good, because I had some answers that I didn't even have time to think about. So he's right up there and he wants to help and it's obviously a lot of experience in IndyCar; Sam, as well. Those two combined is going to be fantastic for my experience on oval I think.

And also, at the end of the race, because they have been drivers, they understand exactly the situation I've been in, and it's just very easy to explain what happened or what we could have done better or what do we need to do better.

Having those two together is definitely a big advantage for me.

Q. Just talk a little about your impressions of the new 2012 IZOD IndyCar Series car, and I understand you might have a chance to drive it on an oval here in the near future.

My whole career, I wanted to try it, and I'm very eager to see what it feels like and start working into the details of it. I think it's a different discipline, and as you may know, you know, I also race in sports cars, raced in IndyCar, and trying oval is going to be a new thing in my career.

And the new car is very nice to drive. It's quick. It's got more downforce. The balance of the car is at the moment, for my car, is really nice. And the carbon brake helps us braking later. So it's a little bit more of everything and they sound great, as well, and that makes it good for the fans.

I think racing is also exciting at the moment. So, we'll see. Barber should be quite a bit different to St. Petersburg because it's such a different layout. Should be pretty cool.

SIMON PAGENAUD: Well, it's funny you asked that. I was just across the street at the Speedway, so I just went there for a little bit of a â€'â€' you know, thinking about visualizing what's going to happen for me in the month of May. And seeing the racetrack, sitting in the grandstands; I had a chance to do a few laps as a passenger.

It's such a daunting track. I think it's the most impressive racetrack in the world of all I've seen. It carries a lot of history. It really feels a lot different to any other race or any racetrack I could have seen anywhere.

Q. You mentioned some aspects of the new car. If you could, could you compare this new car to all of the other cars you have been fortunate enough to race in?

SIMON PAGENAUD: Yes, absolutely. Well, I found this car quite similar to the panels Champ Car used to drive in 2007. It's got more power than the old car. The downforce level feels similar to me to the panels. So with that, you need to carry a lot of speed through the corners, which is going to be great in Barber I think.

And the car is very â€'â€' there's a lot less vibration in the car because it's a Vâ€'6 engine and before we had Vâ€'8. That's pretty nice for the driver, as well. It makes you more accurate when you go into the corners and you can see the track better.

Q: You've mentioned testing at Barber; are there places besides the racetrack you like to go.

SIMON PAGENAUD: I don't know much to be honest. I go there and race. On race week, I like to stay at the racetrack. I usually stay in the bus. I like to feel the atmosphere of the rate track around me, and I like to sleep. I need my beauty sleep. I can sleep 12 or 13 hours if I want to. So it's nice for me to just stay at the racetrack and safe some time in my bed. That makes me stronger during the race I think.

So I stay on the racetrack. I try to find some sushi place where I can go for dinner, I love sushi, and that's pretty much what I can tell. I can tell you where the good sushi place is in Barber if you want to go, because I know you like sushi. But that's it really. I haven't been around too much.

THE MODERATOR: We will wrap up today's call and thank Simon for his time today and wish him the best of luck this weekend at Barber Motorsports Park.