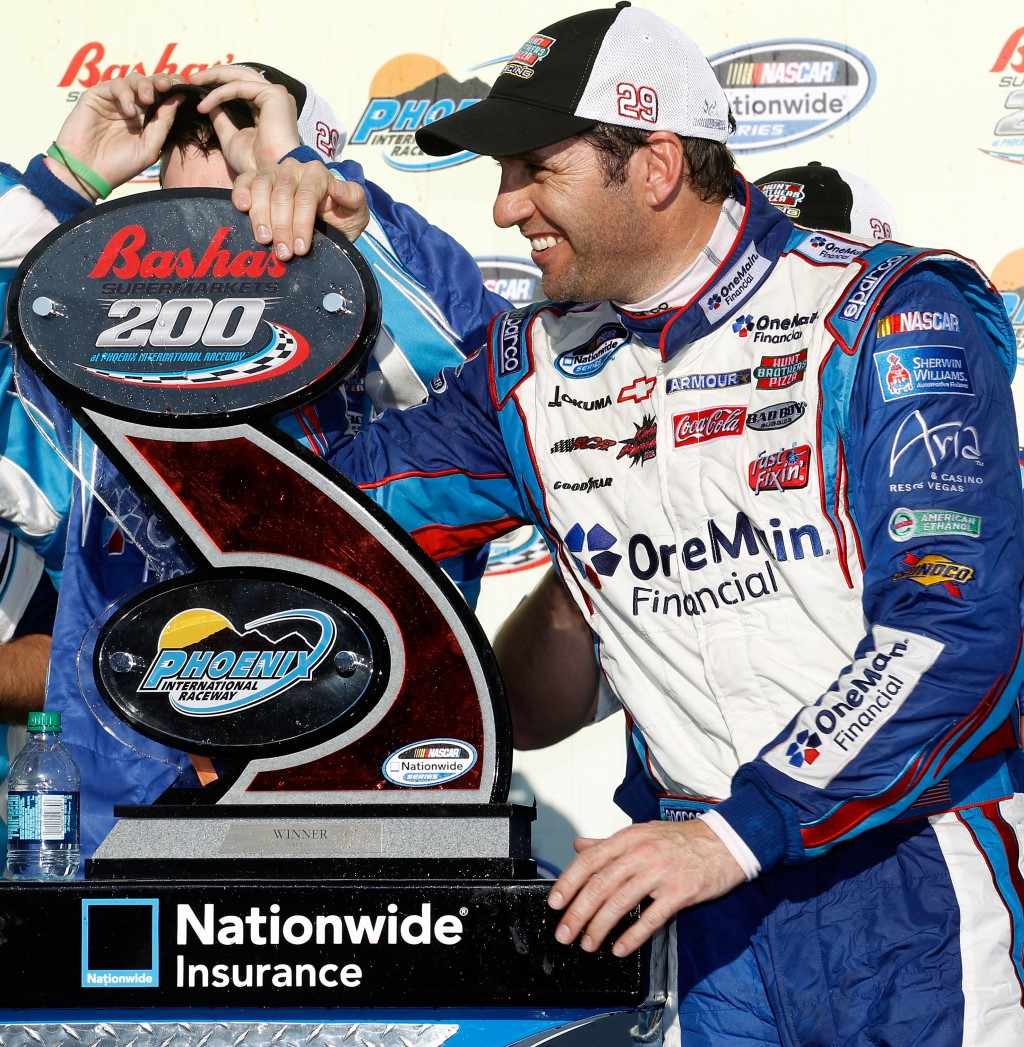 Elliott Sadler got some well-deserved payback at Phoenix International Raceway.

At the one-mile venue where a wreck in Turn 3 effectively knocked him out of the Nationwide Series championship hunt last November, Sadler took the lead with 26 laps left in the Bashas' Supermarkets 200 and held off hard-charging Brad Keselowski for the win.

The victory was Sadler's first at PIR, the sixth of his career and his first in the Nationwide Series since 1998 at Rockingham, N.C.

Defending series champion Ricky Stenhouse Jr. ran third, followed by rookie Austin Dillon and Kevin Harvick, who dominated much of the race, leading 107 of 200 laps, but fell victim to pit strategy in the late going.

Rather than enjoy a sense of vindication at Phoenix, however, Sadler would prefer to forget what happened last year.

"Honestly, it feels like three or four years ago," said Sadler, who leads the series standings by 10 points over second-place Dillon. "Last year was last year, and, yes, it probably could have affected how the championship could have worked, but we're on a whole new deal, a whole new season, a whole new outlook with a different team [with the sale of Harvick's Nationwide operation to Richard Childress Racing], so, honestly, what happened here last year just felt like a long time ago.

"It did not weigh on my mind one second of the whole weekend I was here. I felt like, coming out of Daytona, leading the points with a third-place finish, we just had a lot of momentum on our side . . . I try not to dwell on what happened last year. I try to learn from what maybe I did wrong and apply it. But I'm trying to stay more focused on what we're doing week-to-week this year."

Keselowski took the lead from pole-sitter Denny Hamlin after a restart on Lap 168 but couldn't hold it.

"We're coming off four consecutive top-twos," said Keselowski, who also finished second in the Feb. 25 Drive4COPD 300 at Daytona. "That's pretty good. To come out of the gate and have two strong runs, that's a lot to be proud of.

"I obviously wanted to get one more spot and pick up the win, but Elliott was a little stronger. There's nothing to be ashamed of running second, but we'll keep pushing, and if we keep putting ourselves in this position, we'll get a win."

Driving for RCR, Harvick took control of the race on Lap 53, when he passed Hamlin for the lead four circuits after a restart. He pulled away to an advantage of more than six seconds before Kenny Wallace's crash into the Turn 4 wall caused the second caution of the afternoon.

Hamlin regained the lead off pit road on Lap 105, but it didn't last, as Harvick took over the top spot moments after the subsequent restart on Lap 111.

Harvick stayed out front until NASCAR called the third caution on Lap 163 for debris in Turn 3. When the lead-lap cars pitted one circuit later, Harvick took four tires and came out seventh, as the six drivers ahead of him either took two tires or fuel only on their stops.

Keselowski passed Hamlin for the lead after the restart on Lap 168 but surrendered the top position to Sadler on Lap 175.