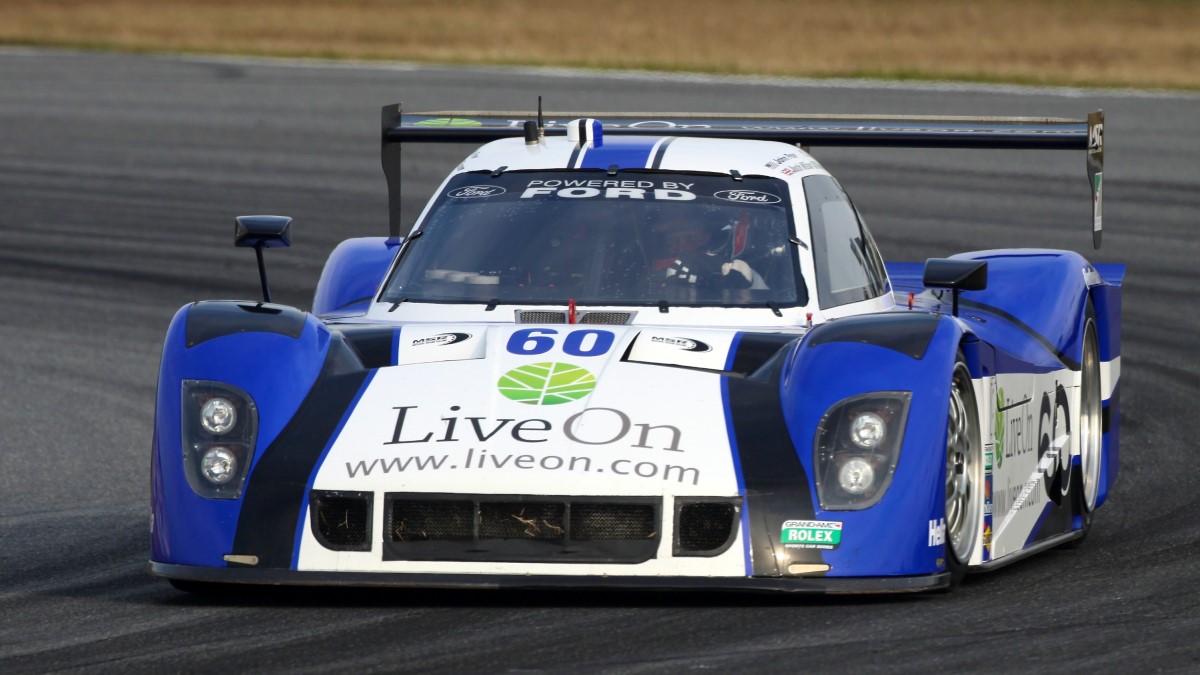 In a battle of ex-Champ Car drivers where the best drivers in American racing were produced, A.J. Allmendinger outdueled polesitter Ryan Dalziel to win the 50th running of the Rolex 24 classic at Daytona International Raceway Sunday afternoon.

Years ago Michael Shank (who himself used to drive in Champ Car Atlantics and a team owner) started a team and struggled for years making it into a winner and today he won the biggest Grand-Am race of the year.

Justin Wilson, another Champ Car graduate co-drove the No. 60 Riley Ford alongside Allmendinger and the two of them carried the car to victory.

Finishing a few seconds behind the No. 60 car was the pole-winning No. 8 Starworks Motorsport Ford Riley and Ryan Dalziel, Alex Popow, Lucas Luhr, Allan McNish and Enzo Potolicchio. The car's rear end was damaged when Lucas Luhr crashed it, which may have been why Dalziel had nothing for Allmendinger at the end.

With the minutes ticking down on the Rolex clock in Pit Row, it was an epic battle on Daytona International Speedway’s 3.56-mile, 12-turn road course. Lead changes between three DP cars – Michael Shank Racing’s #60 Ford Riley, Chip Ganassi Racing with Felix Sabates #01 BMW Riley, and the Starworks Motorsport #8 Ford Riley – had set the stage for the golden anniversary edition of this race to come to a dramatic close.

Scott Pruett (Auburn, Calif.), the owner of Pruett Vineyard and co-author with his wife of four children’s books when not on the track, was within striking distance of tying Floridian Hurley Haywood’s record five wins of the Rolex 24 At Daytona. With little more than an hour left in the race, Pruett lost first and second gear in the #01 BMW Riley gear box which, despite the herculean efforts of his pit crew, completely put him out of podium contention.

At 30 minutes to the checkered flag, A.J. Allmendinger (Denver, Colo.) had been behind the wheel of Michael Shank Racing’s #60 Ford Riley for more than three hours. He took over the lead with Ryan Dalziel (Orlando, Fla.), in the Starworks Motorsport #8 Ford Riley, chasing him down with each lap. Dalziel, a native of Scotland and the 2010 Rolex 24 At Daytona champion, had earned his first career pole in the GRAND-AM Rolex Sports Car Series during qualifying for this race.

As the final laps were logged, Allmendinger’s lead went from 11 seconds to six as the white flag signaled the final lap of the race. He won by 5.198 seconds to earn Michael Shank his first Rolex 24 At Daytona win. Sharing the driving duties with the California-born Allmendinger was Brazilian native Oswaldo “Ozz" Negri, Jr. (Miami, Fla.), Justin Wilson (England) and John Pew (North Palm Beach, Fla.).

“The Rolex 24 At Daytona is such a prestigious race; it’s one you want on your résumé and you want to say that you were part of a victory," said Allmendinger. “Ultimately it’s just amazing. I’m going to cherish this."

“It’s the most fun three hours of racing I’ve ever done," added Allmendinger regarding the push to the finish line and how he had worked hard to build up a gap and then manage the gap over the last 10 laps. “It was flat out. When Dalziel got in the [#8] car I knew that every lap I had to drive my butt off. I feel like it’s some of the best driving I’ve done in my life. It’s fun to walk up and down pit lane [at the Rolex 24 At Daytona] just as a pure fan of racing to see all the different drivers in this series. We’ve been close before, and something happened to take us out. Now to have Ozz and Justin, and John Pew … it’s the biggest win I’ve ever had."

“The thing that keeps you coming back to this event is you don’t have a watch yet," said McDowell. “It’s a great event, and it’s become really an all-star race with great drivers from every series and world champions. So to win one of these races is very special."

Richard Lietz (Austria), sharing the #44 Magnus Porsche 911 GT3 Cup with John Potter/Andy Lally/Rene Rast, took over the driving duties with less than two hours left to go at the 50th Rolex 24 at Daytona. He then guided his car through two pit stops and to the GT victory for the Salt Lake City-based team owned by Potter and led a sweep of the GT podium by Porsche 911 race cars.

In fact, with Lietz, Henzler and Lieb – all Porsche factory drivers – driving their cars to the checkered flag, Porsche Motorsport North America president Jens Walther is especially proud of the Porsche people, not just the race cars.

“With both our customer race car owners and our factory drivers, we have the best people in the motorsports business associated with Porsche, and they are a key part in making our street cars and race cars great," said Walther, who has been president of Porsche Motorsport North America, Inc. since 2010.

Winning team owner John Potter could not contain his feelings in the pit box after the checkered flag dropped, as his team was victorious in one of the greatest sports car races in the world after being in existence less than three years.

“This crew works so hard, and we have come so close to the top step of the podium in Grand-Am in the past, but to win for the first time, at this race is something special. Rene and Andy are great guys, and Richard really brought us home strong," said Potter.

Lietz was pleased that Potter chose him to finish the race, and he thought the field of drivers was especially strong.

“I was honored to carry the team flag to the finish line, and we bested a field of world-class GT drivers," said Lietz.

For Rene Rast (Germany), the defending Porsche Mobil 1 Supercup champion, it was his first time at Daytona, but the significance of the victory did not escape him.

“To finish at the top with perhaps the greatest GT field ever is an honor, and I thank Porsche and Magnus Racing for allowing me to be involved," said Rast.

“This was a great victory for John Potter and Magnus, but it is only the first step in our quest for the Rolex Grand-Am GT championship and North American Endurance GT Championship," said Lally, who will run with Potter for the entire Grand-Am season in their Porsche 911 GT3 Cup.

Finishing the Porsche sweep of the podium is the second-place TRG Porsche of Steve Bertheau/Marc Goosens/Wolf Henzler/Spencer Pumpelly/Jeroen Bleekemolen, and the #59 Brumos Porsche (Leh Keen/Hurley Haywood/Andrew Davis/Marc Lieb) was third. Both teams led for substantial lengths of time during the 24-hour event, but, in the end, both the cars couldn’t catch the Magnus Porsche.

“We ran the whole event flat out, and spent hours and hours in the lead, but we had some front-end body damage that hurt our aerodynamics, and an extra pit stop in the end brought us up a little bit short. Still, we are proud of our Brumos drivers and crew, and we won the GT championship last year after finishing fifth, so we will proceed on that mission again," said Hurley Haywood, five-time Daytona overall winner an current Brumos team manager.

For Porsche factory driver Wolf Henzler (Germany), qualifying woes put their TRG Porsche near the back of the field for the start of the race, but they also led for multiple hours before clutch woes slowed them down near the end.

“My Porsche colleague Richard Lietz is very fast, and we could not make up any time on the Magnus car in the end. But we are happy with our second-place finish, and the TRG crew prepared a Porsche which performed great all race," said Henzler, who won the GT class at Le Mans in 2010.