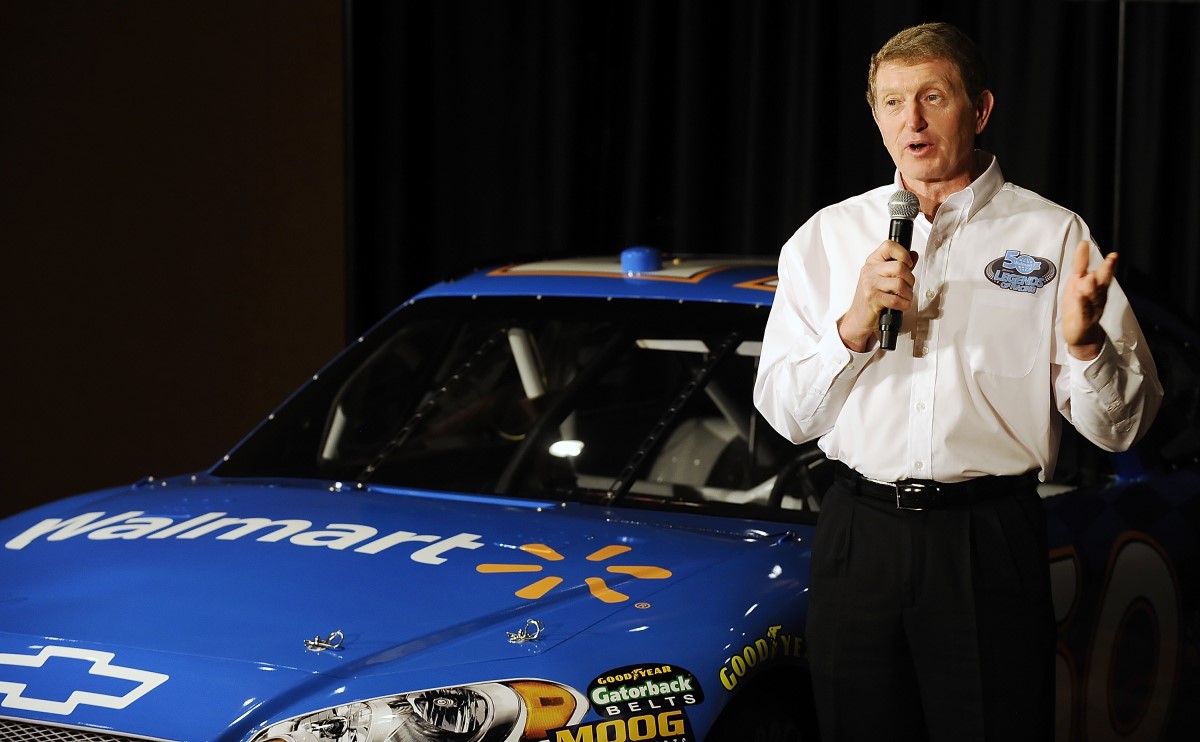 First up on the final day was an event hosted by Wal-Mart, who announced they will make their first foray into NASCAR Sprint Cup, serving a primary sponsors for 1988 Sprint Cup Champion Bill Elliott in the Coke Zero 400 at Daytona Speedway in July.

Carrying the no. 50 in celebration of Wal-Mart’s 50th anniversary, the car will be fielded by Turner Motorsports and with feature Hendrick horsepower under the hood.

You don’t know how gratifying this is to me to be a part of this program," said Elliott. “The Most Popular Driver Award was probably the biggest thing that ever happened to me in my career, and this rates right up there. I know I’m getting toward the end of my career, but yet to be chosen for this was pretty wild.

“With the state of the economy in general, I feel like this is such an important program for NASCAR, I think it’s equally important for Wal-Mart to kind get into it, and make a first step. I don’t think people realize what a deal this is. I think Wal-Mart will be a great partner and a great opportunity for NASCAR."

Next up was a visit from Penske Racing and their re-vamped driver lineup, with A.J. Allmendinger taking over the no. 22 Shell Dodge joining Brad Keselowski in Penske’s Sprint Cup stable.

After parting ways suddenly – albeit not unexpectedly – with driver Kurt Busch, Allmendinger emerged as the frontrunner for the ride after a solid run driving for Richard Petty Motorsports for the last three seasons.

“Putting A.J. in the 22 car really started with a call from Richard Petty," said team owner Roger Penske. “They were going to have to take A.J. out of the car for funding reasons, so we said we would be very interested.

“Within a week of introducing A.J. to our sponsors, we were able to put a program together for him that we’re excited about. I think I’ve got two great young drivers with a big future and great sponsors."

“I finally realized I was a Penske driver this morning when I put on my white Hugo Boss shirt," said Allmendinger. “It has been an amazing ride to get to this point. I’ve worked hard for five years and went through a lot of ups and downs to get to this point," Allmendinger said. “Right now, this is my time to have a chance at it.

“My goal is to go out there and try to win races, make the Chase and contend for the championship. Anything less than that would be really disappointing,"

Keselowski will be entering his third season at Penske and his second behind the wheel of the famous no. 2 Miller Light Dodge – the “Blue Deuce"

Finishing a career-best fifth in the 2011 standings with three wins, Keselowski has proven to be a driver to be reckoned with in the championship battle and now as the senior driver in the organization, he’s ready to take the bull by the horns.

“Last year, when the pre-season ranking came out, and we were rated 21st," said Keselowski. “As Roger (Penske) said, we might have undersold and over delivered. That’s the plan for 2012. We are making huge gains. I’m committed to getting that first Sprint Cup Championship here at Penske Racing

Penske Racing also announced a three-year extension with MillerCoors to continue to serve as primary sponsor for the no. 2 Dodge, while Coors Light, a Miller brand, extended their marketing partnership with NASCAR.

Concluding the 30th annual NASCAR Sprint Media Tour was a visit to the NASCAR Hall of Fame, where NASCAR chairman and CEO, Brian France gave his annual “State of the Sport" address to the media.

Rather than make any major changes for 2012, France instead touched on the successes from 2011 season, including the new points system as well as the “Pick A Series" rule, where drivers must declare only one series to run for championship points.

“We're very pleased with how all those changes played out," said France. “Simplifying the points system was also a good move that was embraced by our broadcast partners, the media, and most importantly, our fans."

NASCAR vice president of competition Robin Pemberton also addressed the issue of eliminating the two-car tandem drafting that dominated the four restrictor-plate races in 2011 and was also evident in pre-season testing at Daytona last month, which has proven unpopular with fans.

In response, NASCAR has introduced new specifications for the cooling systems and aerodynamics of the Sprint Cup cars to try reduce two-car drafting.

“We know that the fans want to see more of the traditional style pack drafting, and so do we," said Pemberton. “We won't be able to totally eliminate the two-car push. It will be a valuable tool that the teams will be able to use from time to time. However, we do believe that we've come up with a rules package that will help it be the exception rather than the norm."

Among the changes for the 2012 season France discussed was perhaps the biggest change to hit the sport since the introduction of the new Car of Tomorrow – the move to electronic fuel injection.

Beginning this season, the traditional four-barrel carburetor used in NASCAR for over six decades will be replaced in the Sprint Cup Series with EFI.

“Fuel injection excites the manufacturers," said France. “It excites technology companies, and between that and the various things we're doing with the 2013, our expectation is the car manufacturers are going to increase their support for the teams, increase their activation, which is great for all of us, and they're excited to do that because they feel good about it.

“It's the next important step in making the cars and the track more like the production cars the fans drive every day. It also helps us with smart technology at just the right time."

Looking ahead to next year, NASCAR has been working with manufacturers to develop new cars for the 2013 season, looking to bring more “brand identity" to the sport.

Ford unveiled their new 2013 Fusion entry earlier this week, with the other three manufacturers set to begin testing their 2013 models on the racetrack in the coming weeks.

“Throughout the 2012 season, you will be seeing and hearing a lot more about our 2013 car," said Pemberton. “It's certainly a milestone in our sport, and we've worked very hard and closely with the manufacturers on the new car and the four new models that are simply outstanding.

“I think the fans are going to love them. It's going to be such a positive step in helping our race cars be more and more relevant to our fans, past, present and future."

As for major changes on the horizon, such as new venues or manufacturers coming into the sport, France said there is no “one big thing that we're pointing towards"

“In terms of our company, a lot of important work was done in 2011 to position us for the future. That work is still going on. It's improving safety, competition, cost management for the teams, and that mission never ends," said France. “One thing is for sure; NASCAR is carrying great momentum into 2012, and I can't wait to see it all get started on February 26th.