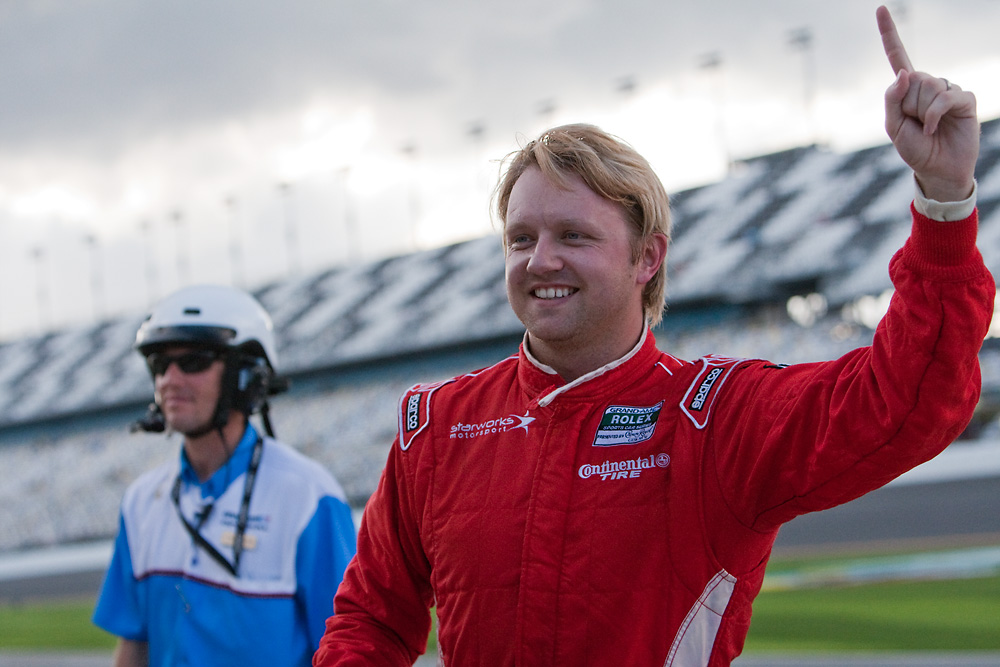 The catch-phrase “position is everything," accurately reflects the action today at Daytona International Speedway as competitors at the 2012 Rolex 24 At Daytona qualified for the grid in advance of Saturday’s start of the historic 50th edition of the classic endurance race. As the traditional season-opening motorsports event in America, the Rolex 24 At Daytona always delivers plenty of excitement, and when taken in combination with golden anniversary celebrations, this weekend’s race is in a league of its own.

Oswaldo Negri, Jr. (Miami, FL) is all too familiar with “taking pole" at the Rolex 24 At Daytona, having done so in 2008 (while setting a lap record), and again in 2010. Negri is driving the #60 Ford Riley DP for Michael Shank Racing, and although the car is showing great balance, it did not have quite enough top speed to put the native of Brazil on the front row. “The car is good but we need more straight line speed," said Negri. “We’re not as fast as we want to be on the tri-oval, but we are working on it pretty hard. We have a solid driver lineup with A. J. Allmendinger (Denver, Colo.), Justin Wilson (UK) and John Pew (North Palm Beach, Fla.). We need to keep it on the track and come into the pits only for fuel and tires. The last four years I have qualified on the front row twice. That’s pretty cool for bragging rights, but at the end of the day on Sunday all I want is a trophy in one hand and a new Rolex timepiece in the other."

While already a Rolex 24 At Daytona champion, having won in 2010, today Ryan Dalziel (Orlando, Fla.), earned his first career pole in the Grand-Am Rolex Sports Car Series while driving the #8 Starworks Motorsports Ford Riley. The 2011 Grand-Am Rolex Sports Car Series DP Champion, Dalziel, who is a native of Scotland, was not surprised with the DP qualifying position – even though he was at the wheel of the last new Riley to be delivered, which was run for the first time during the second practice today.

“Pole proves to us that we have a fast car," said Dalziel, who has been the only driver in the car thus far. “I felt pretty confident coming out of the car and I’m really excited for all my teammates. We triple and quadruple checked everything. We were the only team last year not to have a mechanical failure, and we’ve carried the same team over. Now we just have to concentrate for the next day and a half on making the car reliable."

A mere 0.121 seconds was all that separated Max Angelelli (Monaco) from taking the DP pole position. “I cannot hide my disappointment," said the Italian in reference to the #10 SunTrust Racing Corvette having led in pre-practice. “I wasn’t expecting P2. I still feel our car is really fast and that for the Rolex 24 At Daytona we will be the car to beat. The new cars, we have no idea what can happen. I’m expecting issues for everybody. We feel pretty strong with our SunTrust Corvette. It is 24 hours, and Daytona … anything can happen. We are really focused on not having major problems, or something we can fix quick – within five minutes."

In the GT class, the qualifying session has set the stage for the revival of a classic rivalry – between Porsche and Ferrari. Andrew Davis (Bogart, Georgia), the 2011 Grand-Am Sports Car Series GT champion, set the pole with a time of 1:49:342 at the wheel of Brumos Racing’s #59 Porsche GT3, with Jeff Segal (Miami, Fla.) taking P2 in the AIM Autosport Team‘s #69 Ferrari 458 with a time of 1:49:357.

“It was intense session," said Davis who missed winning pole in 2006 by a hundredth of a second. “I pushed as hard as I could after having struggled during the practice earlier today. From all the testing, including the Roar [Before the Rolex 24], it’s the best the car has done."

Davis emphasized that the important thing about Daytona is the race, not qualifying. “Everyone wants a good qualifying because it’s a feather in their cap, but it’s a 24-hour race so we want to be there in the end and get that Rolex on the podium. The best place to start is up front, but qualifying will be a distant memory after 24 hours, so I’ll enjoy this for now."

For Jeff Segal, it was “a nail biter" in the car during qualifying. “I’ve never seen anything like this," he said. “The level of talent and the preparation this year is phenomenal. We’ve got an excellent car and I think it shows in our qualifying P2. We’re hoping to bring the car home in good shape on Sunday. I didn’t know what to expect [in qualifying], except that it wasn’t going to be separated by much. When Ferrari comes to Daytona they come to win. We’ve had a lot of support, and there’s been a tremendous amount of development, last minute updates. We expected the car to be good, to be fast…that’s why we signed on. If we do our part, keep the car clean, we have a good chance."

The historic 50th Anniversary of the Rolex 24 At Daytona gets underway on Saturday, January 28 at 3:30 p.m. when Grand Marshal A.J. Foyt issues the command “Drivers, start your engines." Among the special events planned to celebrate the 50th Anniversary is the Rolex 50 Years of Champions display which will feature over 30 of the championship winners at a charity gala to benefit the Halifax Health Foundation this evening, Thursday, 26 January, at the Ocean Center in Daytona Beach. After a procession of the championship cars from the Ocean Center to Daytona International Speedway at 9:00 a.m. on Friday morning, January 27, weather permitting, the cars will be on display throughout the weekend.