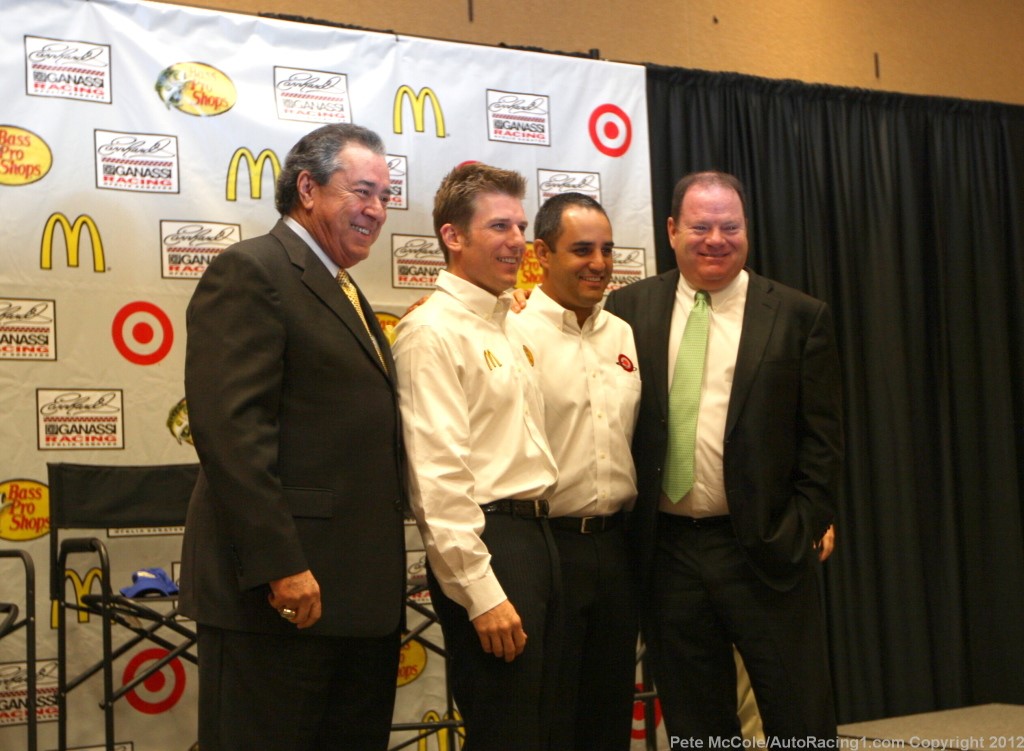 Kicking off the second day of the tour was an event hosted by Earnhardt Ganassi Racing with Felix Sabates, including drivers Juan Pablo Montoya and Jamie McMurray.

To say team owner Chip Ganassi was disappointed with his Sprint Cup teams performance in 2011 would be an understatement. Although his IZOD IndyCar team and driver Dario Franchitti captured their third title, the McMurray and Montoya finished 27th and 21st, respectively and were shut out of victory lane.

“Hopefully this is the last time that I have to say we finished 21st and 27th in the points last year," said Ganassi. “That’s just pathetic for a team with our ability and our resources. Simple as that.

“As for 2012, the great thing is you get to start all over again. Certainly after the year we had, we do needed to start over in a lot of areas. We’ve made changes in the team, we feel pretty good about them. Like all so many sports, racing is about momentum. We want to start out fast, because certainly success can breed success."

To that end, Ganassi has made wholesale changes to the team, letting go of competition director Steve Hmiel, team manager Tony Glover and lead engineer Ed Nathman and brought in John Probst to take over as head of engineering as well as new team manager Max Jones.

“The change was needed because we were going down a path and not getting better," said McMurray. “Really from ten races into the season, it seemed like we were just going the wrong direction and it’s hard when you have a certain mindset of the way you want to do things to veer off of that. With the new guys they brought in it’s a little different mindset, a little different way of going about things, we got some guys from Hendrick and some guys from (Team) Red Bull, and those teams were running well, so you get to have a lot of ideas that they were working on for the last year, and you get to have that immediately."

One thing the team will also have in place is sponsorship, as both of Ganassi’s Sprint Cup entries are fully funded, with McMurray’s team welcoming new sponsor Banana Boat sun care, who will sponsor McMurray for the June race at Pocono.

The tour new rolled on to Charlotte Motor Speedway, where Roush-Fenway Racing and team owner Jack Roush welcomed the media to kick off the 25th anniversary season for Roush Racing

The 2011 Sprint Cup Championship will be remembered by Roush as the one that got away. Although the team has finished in the runner-up spot before, 2011 was still a bitter pill to swallow, with Carl Edwards losing out to Tony Stewart in a tie-breaker in the final race of the season.

At the end of the 2011 season, Roush faced an even bigger hurdle as the lack of sponsorship forced the organization to shutter the no. 6 team – Roush’s original team – and part ways with driver David Ragan.

“This was the roughest economic depression that we’ve had," said Roush, “and it was a great disappointment (to shutter the No. 6 team), but this is a business that ebbs and flows, it has ups and downs with the economy, so we’ll be back with our fours teams, it’s just a matter of when, and maybe even beyond four teams if NASCAR would allow that in the future."

Roush made the most of the situation to help improve his remaining three teams, notably Greg Biffle’s team – the only other one of Roush’s teams to not make the Chase for the Sprint Cup in 2011 – bringing in personnel from the no.6 team to work on Biffle’s team.

Biffle with come into 2012 was an entirely new pit crew, car chief joining new crew chief, Matt Puccia, who took over from Greg Erwin in July.

“I was exciting about how well we ran at the end of the 2011 season, was really looking forward to the season getting over so we could start 2012 with a clean slate to get back in the Chase. Notable since when Matt Puccia came on we got three poles between that time and the end of the season and was in position to win at least three races but came up a little short on those opportunities."

“I really feel like we got our cars much better were making much better decisions, we made a lot of changes in the offseason, I’m looking forward to getting back in the Chase and winning races."

Trevor Bayne was by far the biggest Cinderella story of the 2011 season, winning the Daytona 500 driving for the Wood Brothers in just his second career Sprint Cup start, becoming the youngest driver to ever win the Daytona 500.

Bayne quickly became a media darling following the improbably win, but the momentum from the victory didn’t translate to success on the track, as Bayne only managed only five top-20 finishes in his 17 Sprint Cup starts in 2011.

For the 2012 season Bayne will once again partner with the Wood Brothers for a 20-race schedule – including a return to the Daytona 500 – and hopes to get the Woods back into victory lane again.

“My goals are still kind of the same, last year I went into the season looking to win races and looking to be competitive in the Cup Series and I think that still stands," said Bayne. “I think my expectations moved up a little bit – when I finish top 15 in the Cup Series we’re a little bit disappointed because we’ve tasted victory lane and we know what that feels like, whereas before I would’ve have been jumping up and down because we finished 15th and beat 28 other guys. Now it’s like we desire that top ten or top five every weekend

“We’re looking to win races and finish top three every weekend. That’s our goal this year. We go to the track every weekend to win whether its Daytona or Las Vegas, we’re going there to win."