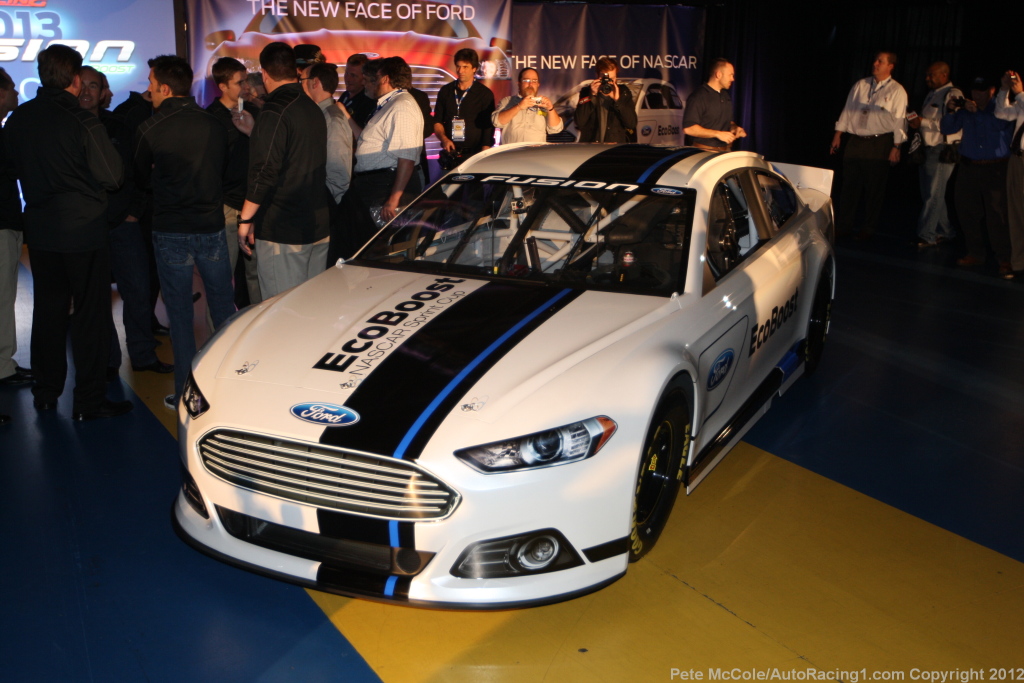 Looking to rebuild their brand identity in the sport of stock car racing, Ford Motor Company introduced their new 2013 Ford Fusion entry into the NASCAR Sprint Cup Series to the media at a press event at Charlotte Motor Speedway on Tuesday.

The new 2013 production model, featuring a prominent front grill and new Eco-Boost technology, is scheduled to hit showrooms for the public in mid-2012 with the stock-car version slated to make it’s debut in the NASCAR Sprint Cup Series at the 2013 Daytona 500.

Chevrolet, Dodge and Toyota are also expected to unveil new model cars for the 2013 season as well.

The stock-car version of the 2013 Ford Fusion is intended to as closely match the production model as possible, as to give the car a “stock car" look.

"We wanted Fusion to be the car that helped return ‘stock car’ to NASCAR," said Ford Racing Director, Jamie Allison. “I think fans, when they see the car, are just going to smile and cheer. It is going to reengage them with the sport and make the sport better because there is just something natural about seeing race cars that look like cars in their driveways."

NASCAR worked closely with Ford as well as the other three major manufacturers in NASCAR, called OEM’s, or original equipment manufacturers, to help develop cars that would have a brand identity unique to each make.

“We’ve always understood but we get today, more than ever, loud and clearly that the NASCAR Nation is made up of car enthusiasts and NASCAR fans certainly love to pull for a brand or make of car second only to being able to pull for their favorite driver," said Helton. “Today, I think, is a very significant landmark for us to point to as we go down the road and look back 50 years from now on the evolution of NASCAR as we get the opportunity, along with Ford and the other manufacturers involved in the Sprint Cup Series, to introduce and kind of look around the corner to 2013 at what the 2013 Sprint Cup cars will look like."

“It’s been a great process, and it started basically with discussions we had with NASCAR, we said we wanted to put a little more brand identity back into the racecar," said Ford Operations Manager, Andy Slankard. “So with that discussion, they came out with a plan and we got the OEM’s together and basically we worked together as a team to really drive to see what kind of brand identity we could get in all the cars.

“The objective totally was the fan can look at a racecar and say that’s a Ford, that’s a Chevy, that’s a Dodge.

Ford had already worked to establish a brand identity with the introduction of the Ford Mustang in the NASCAR Nationwide Series, which closely resembles the showroom production model car.

It was the new Mustang, says Allison, that was the first step toward developing the new Fusion.

“I know we’re talking about Cup cars, but, really, the project at Ford started when we introduced Mustang in Nationwide," said Allison. “That was a tipping point for the sport. The reaction we got for Mustang was tremendous from the media, the fans and inside the company. But we always said that was the very first step."

Roush-Fenway Racing driver Greg Biffle was behind the wheel for the unveiling of the car, and then he and fellow Roush driver Ricky Stenhouse, Jr. took two of the new Fusions for a few parade laps around Charlotte Motor Speedway.

“My hats off to NASCAR and Ford and also our team that have worked on this car to make it what it is. I think the fans will really like it," said Biffle. “This thing is awesome looking, it looks like a racecar. It looks fast just sitting here."