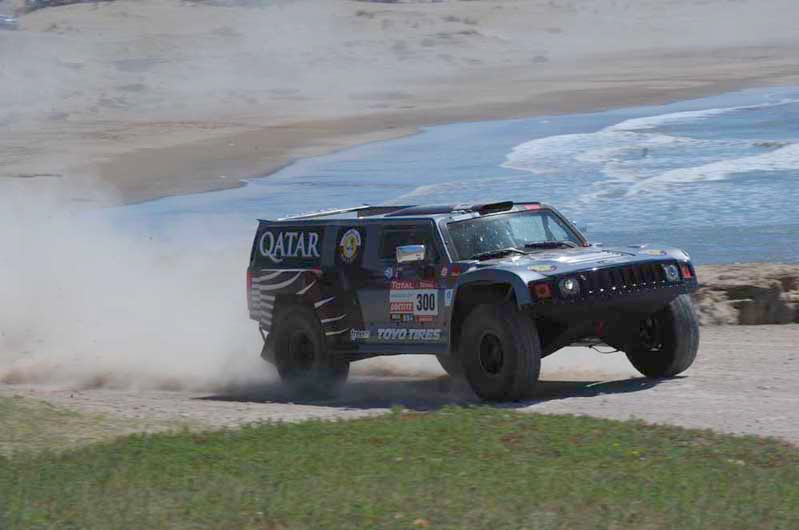 A day after a Dakar stage was cancelled because of a snowed-in Andes pass for the first time, competitors took to soft sand and dunes in a 419-kilometer loop course around the northern Chilean city of Copiapo in the Atacama region, one of the driest places on Earth.

Al-Attiyah, whose Hummer has been fast but plagued by bad luck, finally dominated to the end of a stage.

He beat second-placed American teammate Robby Gordon by 7 minutes, 30 seconds. Peterhansel was 7:53 behind in his Mini and happy to concede a 1-2 finish to the Hummers, who aren’t title contenders for now.

Peterhansel, a nine-time Dakar champion, was atop the overall – 11:22 ahead of Krzysztof Holowczyc of Poland and 13:09 in front of Gordon. Al-Attiyah was 43 minutes behind the leader.

“Our objective is to claw back seven or eight minutes every day," Al-Attiyah said. “We have no choice if we still want to win the Dakar."

In motorbikes, defending champ Marc Coma of Spain won the stage and Cyril Despres of France finished second and kept the overall lead.

Despres stayed on Coma’s tail to limit the latter’s win by 2:03. Paulo Goncalves was 2:49 behind on a Husqvarna.

Marc Coma just pipped Cyril Despres to the finishing line of the stage by three seconds, having set off two minutes behind. The Spaniard therefore cut 2m03s out of his KTM teammate’s overall lead, reducing to 7m48s.

The leading duo again finished first and second on the stage, but were helped by others getting into trouble. On the first stage of this year’s race in his homeland, Chile’s Francisco Lopez separated the KTM pair at the first checkpoint, but then fell at the 83 km mark. He was straight back up and on his way again, but had lost more than eight minutes by CP2 before coming home a whole half an hour behind Coma – enough for him to drop from fourth to ninth overall (albeit just a second behind eighth placed Stefan Svitko). He is doubtful though that he’ll be able to continue at all.

“I fell in the first part of the special," said Lopez. “Not very hard, but enough to re-awaken the pain in my right knee. In the second part of the special I suffered so much on the dunes that I was hardly able to ride. I do not know, but I fail to see how I could continue tomorrow. Fortunately, tomorrow is the rest day, so I will see the bivouac doctors and call mine, but I think my Dakar has come to an end. I am in a world of pain right now."

After Lopez’s demise it was Juan Barreda Bort who took the challenge to the KTM men, and the Husqvarna rider was just 20 seconds adrift of his fellow Spaniard Coma at WP6. He then took a wrong turn before eventually coming home more than 13 minutes down. Instead it would be his teammate Paulo Goncalves nearest to Coma and Despres, 46s behind the Frenchman. He moves up to fourth overall following Lopez’s losses, behind fellow Portuguese rider Helder Rodrigues (who was fourth on today’s stage).

Up against the might of the Patronelli brothers, it had been Tomas Maffei leading the way into Chile. However, he would lose nearly an hour on the stage – though he would only fall to second place overall. That’s because Marcos Patronelli lost even more time – 1h20m to be more precise.

“This stage was very long," said Marcos. “I made a mistake at km 230. I took a wrong turn and did not realize I had until much later. I lost 30 kilometers due to this mistake – quite a lot of time. Therefore, I rode at a reasonable pace for the rest of the stage. What else could I do?"

All that leaves Alejandro Patronelli in pole position to repeat his rally win from 2011 – with 58 minutes in hand over nearest challenger Maffei. He’s being naturally cautious though.

“The stage was very interesting. I finished among the 30 first riders of the motorcycle classification. That is good. But the general classification is not the most important thing. There is still a long way to go. Of course, this classification means a lot and means nothing at the same time. Look at what happened to Marcos. He lost over an hour. He is so stubborn… I had told him to wait for me."

Cars: Al-Attiyah Back As The Hummers Conquer The Dunes

After losing 45 minutes over the course of the previous two stages, everything came together for defending champion Nasser Al-Attiyah today. He was actually two minutes down at the first checkpoint, but fought back through the remainder of the stage and was on fire during the dunes, passing a number of the cars ahead of him. The Qatari finished up more than seven minutes clear of anyone else. He’s still only sixth overall, more than 40 minutes adrift – but he hasn’t given up hope of retaining his title just yet.

“The car worked perfectly well today and we attacked from the beginning to the end of the special," said Al-Attiyah. “We took a lot of risks to set the best time. Our objective is to claw back seven or eight minutes every day. And today we did it perfectly. We will do our best to repeat this performance in all stages from Monday onwards, or even try to do better. At any rate, we have no other choice if we still want to win the Dakar!"

By the end of the stage his nearest rival was actually his team boss Robby Gordon in the other Hummer. An early flat tire left him five minutes down at the first checkpoint, but finished the stage second fastest. This lifted him back into the podium places overall – but he thinks it’s Al-Attiyah who can still stop the Minis from winning the rally.

“It really was a perfect day for the Hummers," he proclaimed. “I had a flat 25 km into the first special and Peterhansel overtook me, but we were later able to move back ahead of him. We will see exactly how much time we gained on him, but it is obvious that our car is extremely fast on this type of terrain. It is easy to see that it was designed for this sort of stages. We have also changed a lot of things, including the transmission, and it is now a fearsome machine. In fact, I am sure Nasser is going to win this thing… OK, the others are still ahead, but I think we are in a very good position for the rest of the rally."

Stephane Peterhansel was just 23s adrift of Gordon on the stage, and well ahead of his nearest challengers (and teammates) Krzysztof Holowczyc and Nani Roma. The Frenchman’s overall lead over Holowczyc is now at 11m22s.

Trucks – All Over For Biasion

The story of the day in the trucks category was Miki Biasion, who stopped between WP8 and 9. The former two-time World Rally Champion had been lying second in his Iveco as he enjoyed a day-off on his 54th birthday yesterday.

Team leader Gerard De Rooy won the stage to strengthen his lead, while Ales Loprais finished second to move up into the same placing overall in his Tatra.