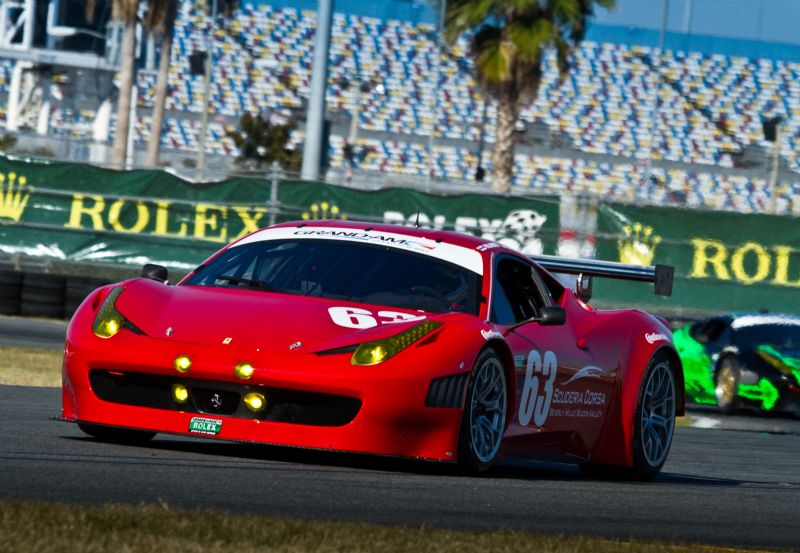 Day two of the Roar Before the Rolex 24 – the last test event leading into the 50th Anniversary of the Rolex 24 At Daytona on January 28-29, 2012 – saw a larger than typical turnout of fans today at Daytona International Speedway. The chance to see motorsports stars and celebrity drivers, along with the exciting new GT cars, including the purpose-built Ferrari 458 Italia Grand-Am along with Audi’s R8, combined with perfect weather to bring out the crowds which included lots of youngsters.

Star Power in the GT Class: With several high profile celebrities in the GT class, three teams in particular are capitalizing on their star power to the benefit of charitable organizations. Actor Patrick Dempsey, whose Dempsey Racing Team finished on the podium at the 2011 Rolex 24 At Daytona, is raising awareness and funds for the Dempsey Center for Cancer Hope & Healing at the Central Maine Medical Center, while AC/DC guitarist Brian Johnson (England), driving for Fifty Plus Racing, is raising funds with the “Highway to Help" program to benefit the Chattanooga-based Austin Hatcher Foundation for pediatric cancer. Justin Bell (England), son of legendary driver Derek Bell, recently joined Magnus Racing for their program which raises research dollars to support the Children’s Tumor Foundation.

“We had a rough day yesterday," said Patrick Dempsey on day two of the three day test in reference to the performance of his #40 Mazda RX-8. “One of the motors was an old one that we weren’t sure about and today it will be replaced and then we will work on the set-up on the car. I would rather it happen now than on the race weekend. It’s unfortunate when you have a problem like that because the guys are working really hard to get everything done in time, which they will, but at the same time this is all really good practice. The Roar Before the Rolex 24 are test days – and we are being tested."

“Everybody here wants to win the 50th Rolex 24 At Daytona," continued Dempsey. “Look at all the people who have shown up. There are a lot of past winners here, which is great for the show. Ticket sales are way up so it is all good for road racing in this country and it’s so great that this event has been around for 50 years. Our team did really well last year and it was such an accomplishment – both personally and for the team – but it’s a long race and you have to be very patient."

The actor, a native of Maine, emphasized that it was special to be able to use the platform of his racing team to help cancer patients through the Dempsey Center for Hope & Healing. “All the treatment we give is free and it is very moving to see what the doctors are doing there."

For Justin Bell, who last raced the Rolex 24 At Daytona in 2008 which ended with “a big spin out," there is a lot of excitement in returning to the race, “especially with such a great foundation." For the last few years his focus has been his career as a motorsports television presenter and he currently hosts the World’s Fastest Car Show, which seems appropriate for a winner of Les 24 Heures du Mans.

AC/DC guitarist Brian Johnson continued the theme of being able to give back by using his celebrity to do good. “It’s not too hard to actually lend yourself to a good cause," he said, adding that that it was important to be able to do something for your community. Explaining that they don’t treat the music star differently, Johnson’s co-drivers said that he “was just another driver looking to do his very best."

Driving one of the new purpose-built Ferrari 458s is Giancarlo Fisichella (Rome, Italy) for Risi Competizione. Fisichella is no stranger to endurance racing having contested the last two editions of the 24 Heures du Mans, finishing fourth in 2010 and second in 2011.

“I did many years in Formula 1 with lots of races," said Fisichella whose Formula 1 career spanned 1996 to 2009 with three victories to his credit. “Because I am Italian I have always loved Ferrari cars. I really like this Ferrari 458 Italia Grand-Am that I am driving and I am looking forward to racing it for the Rolex 24 At Daytona. This will be my first time here and I love the atmosphere and I am sure for the race it will be fantastic. The Ferrari I raced at Le Mans is very similar to this car, but that was a GT2 and this is a GT3. The tire compound is a bit harder because of the rules, and there are some other small differences but they are comparable and I am sure we will do quite well in the race.

Racer’s Edge Motorsports is running the only Viper in the GT class, and the international driving team in the #87 car consists of Maxime Soulet and Jan Heylen who are both from Belgium, Costa Rica’s Emilio Valverde, along with Douglas Peterson of Bonita Springs, Florida.

“This Viper is a brand new car and it was very difficult to drive in the first couple of sessions," said Valverde. “We have been working on it and it is definitely improving and the lap times are looking a lot better. We are hoping we will find more things to improve and we hope we can be more competitive for the race. This is my second time here at the Rolex 24 At Daytona, last time I was racing a Porsche but I am hoping I can use my experience and have a great finish for the race. The Rolex 24 At Daytona is very popular in Costa Rica and, in fact, many people from Costa Rica will be coming here to watch the race. They are interested in Grand-Am racing and they will be following the results of the race."

For Soulet it will be his first time at the Rolex 24 At Daytona and he is excited to be here. “In Belgium I raced for Porsche in the FIA GT3 in the Belgian Championship and in the 24 Hours of Spa. Now I am racing the Viper for the first time and it is a fun car to drive. This is the first time out for the car and we need to work a bit more on it especially with regard to the power because we are definitely down on power but I am sure we will get there. My first time on the banking here at Daytona was like… ‘whoa what’s happening here?’ This is a very exciting track to drive! I’m more used to the banking now and as they have told me it is flat-out all the way and now I am flat-out so now it’s okay.

Testing at the Roar Before the Rolex 24 concludes tomorrow, Sunday, January 8.