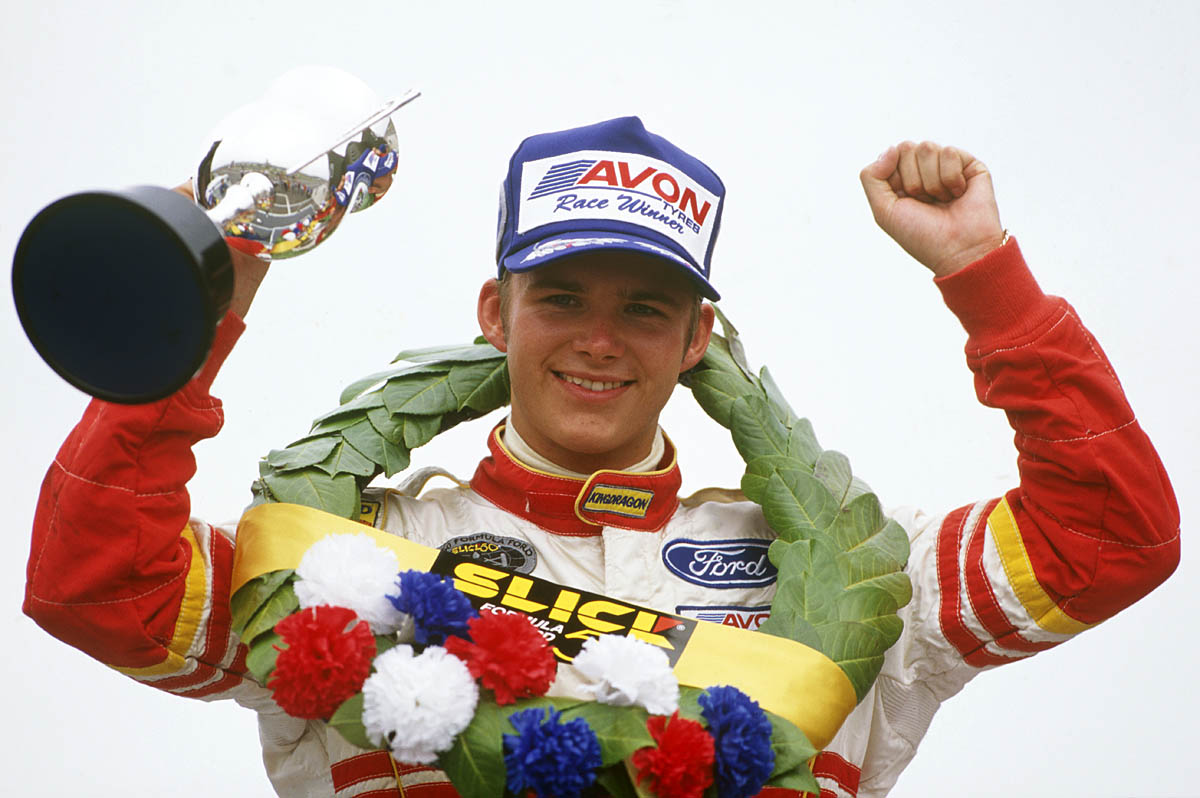 The reaction from the IndyCar community has been one of varied emotions, ranging from shock over the death of a man many saw as larger than life to inexplicable sadness for the wife and two young sons to that of raw anger over what some deem a senseless death on a track too dangerous for modern Indy Cars.

And while the subject of safety, particularly running Indy Cars on banked oval tracks designed primarily for stock cars, is a relevant one that INDYCAR must address, we should not forget Dan Wheldon, the man; the man we began to view very differently after his improbable Indianapolis 500 victory last May; a man seemingly in the prime of his life; the champion racer and person, who left us way too soon.

A native of Emberton, England, Dan Wheldon came to America in the late 1990s in hopes of moving his way up the open wheel racing ladder. Lacking the funding many young racers enjoy, Wheldon nevertheless, excelled in the junior formulae. In 2002, he earned a late season 2 race deal with Panther Racing in the Indy Racing League (IRL). His big break would come the next year, when he was signed by Andretti Green Racing (AGR) to replace a then retiring Michael Andretti. By 2004, Wheldon had established himself as an IndyCar star, as he visited victory lane 3 times and finished second in the series championship.

While he was carving a formidable niche on the track, Wheldon also emerged as one of the more colorful personalities in the IndyCar paddock. Always sporting a smile, clearly comfortable in his own skin, and always looking for the camera, Wheldon talked fast and often, displaying a brash, youthful self-confidence some found endearing, others somewhat off-putting. And in fairness, Wheldon's endless gooing and gushing about how great the IRL was or how wonderful his (insert multiple sponsors here) team du jour was, at times, sounded a little forced and contrived.

We also saw a petulant side when he won his first Indy 500 in 2005. Of course, Wheldon passed rookie sensation Danica Patrick, who would finish fourth, with less than 10 laps remaining to secure that victory. When the attractive Patrick, who garnered the lion's share of media attention, appeared on the cover of Sports Illustrated Wheldon was none too thrilled. At the next race he sported a t shirt that said "I actually won the 500." the act wasn't received well, and Wheldon came off looking biter and entitled.

He could also be, shall we say, a little vain. Of course, he had his crooked British teeth drastically and ostentatiously redone shortly after winning Indy, giving him the most expensive smile on the grid. It was also reported that Wheldon owned in excess of 100 shoes, many of which he would travel with. Fellow drivers use to hide his numerous shoes, something the young Wheldon apparently did not find much humor in.

Petulance, vanity, and immaturity aside, Wheldon was a badass on track, particularly ovals, where he scored 15 of his 16 career victories. In 2006, he parlayed his Indy 500 and championship season into a ride with the powerful Ganassi team. With Ganassi, he remained a regular in victory lane. However, he was never able to capture the same dominant form of 2005.

As IndyCar racing became more of a road and street course racing discipline, the oval proficient Wheldon found scoring top finishes to be more difficult. In 2008, he finished fourth in the series championship, but was clearly outclassed by his Ganassi teammate Scott Dixon. The Kiwi won 6 races, the Indy 500 and the series championship that year.

With the growing belief that Wheldon could not be a front-running road racer, team owner Chip Ganassi began a public flirtation with AGR driver Tony Kanaan. While Kanaan ultimately decided to stay with AGR, the damage between Ganassi and the prideful Wheldon was done. Wheldon decided he would leave Ganassi racing and rejoin Panther Racing. He ran well at times with Panther, including runner up finishes in 2009 and 2010, but never made it to victory lane. When the 2010 season came to an end, Panther and Wheldon went their separate ways. And the split from Panther was like Wheldon's split from Ganassi; less than amicable.

At 32, With the reputation of being an oval specialist and having left two teams on unfavorable terms, Wheldon found himself at a career crossroads. The once ebullient and brash youngster, was now viewed as something of a prickly entitled diva, with a skill set not suited for the modern IndyCar schedule. His 2005 championship seemed a distant memory, of a bygone era. Wheldon was unable to secure a full time ride for 2011, and settled for an Indy 500 only deal with start-up operation Bryan Herta Autosport (BHA).

Wheldon and BHA arrived in Indianapolis last May, without much fanfare. While Wheldon's Indy record was impressive, and he ran strong during practice and qualifying, few thought he had the team behind him to win. Wheldon, however, kept flashing those pearly whites and insisting that BHA would be a factor come race day.

Of course, knowing Wheldon's tendency to embellish, many simply dismissed the corny Brit with the goofy hair and absurdly expensive smile. However, something about Wheldon seemed different. He seemed at ease. He was self-deprecating. He gushed over his wife Susie, and two adorable sons. He talked about the joy of being a father, and how lucky he was to be running for his good friend Bryan Herta. The entitlement and prickliness of years before was never apparent. He showed no bitterness of being left out in the cold by the IndyCar community. Were we witnessing a more mature and more likable Dan Wheldon?

Everything that happened during that magical month of May and after would indicate, yes. Wheldon drove a characteristically heady race and found himself in the mix in the closing laps. As variable pit strategies began to play out, rookie J.R. Hildebrand, who replaced Wheldon at Panther, seemed poised to score an upset victory.

However, on the race's final lap, Hildebrand inexplicably hit the turn 4 wall. Wheldon, who had moved up to second the lap before, opportunistically passed Hildebrand before the start/finish line to score his second Indy win. The victory celebration was classic Wheldon. He kissed the bricks, rolled on the ground, poured milk all over himself. Noting that his contract expired at midnight after the race, Wheldon had plenty of time to bask in the glory.

Suddenly, a driver, who a few months ago, no one wanted was thrust into an unlikely role. The rideless Wheldon had essentially become, outside of Mario Andretti, Indy Car's most famous and charismatic ambassador. And he relished it. Over the next days and weeks, those pearly whites were everywhere: Good Morning America, New York City, Letterman, Disney. When he filled in during Indy Car television broadcasts, he was a smash.

The once prickly, petulant Brit was a proud husband and father, and one of the sport's most beloved figures, who seemed to be entering the prime of his life. We learned after his death Sunday, that he and wife Susie received matching tattoos in Vegas the Saturday before. The tattoo artist, who did not know them, mentioned how in love the two seemed to be, and how much of a joy Wheldon was to be around. From a racing standpoint, Wheldon had been selected as the test and development driver for the 2012 Indy Car, and he slated to be back in the series with AGR full time next year.

Sadly, we'll never know how Wheldon's second act would have played out on track, as he was taken from us in cruel and sudden fashion Sunday. The IndyCar community will no doubt remain in grief for some time over this sudden and shocking loss.

However, if there is solace that can be found, it is the fact that over the past few months, we saw Dan Wheldon at his absolute charming best. We saw a proud father, and champion sportsman, who appeared to be at peace, and had flourished both on track and as an ambassador for this sport we all love.

That will be my lasting memory of the great Dan Wheldon. May he rest in peace.