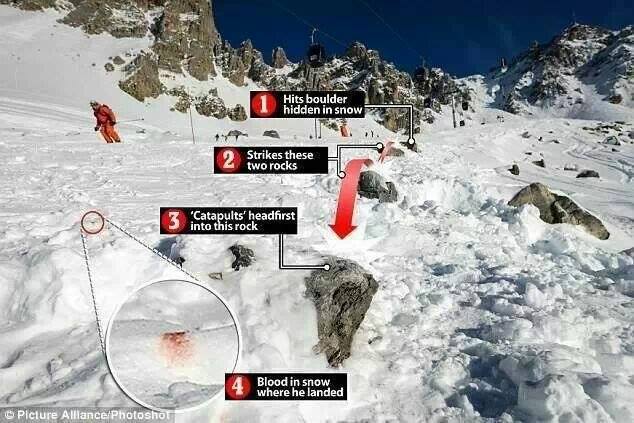 Another photo (left) of the Schumacher accident scene showing the rocks he actually hit.

According to the U.K.'s Mirror and Germany's Bild newspaper, Formula One legend Michael Schumacher suffered his catastrophic head injury while trying to keep an eye on some family friends' kids while skiing in the French Alps. The seven-time champion's accident occurred in an area between groomed slopes at the Meribel resort.

The Bild report states: "Suddenly the daughter (of a friend) of a friend crashed. Schumi helps the girl, leaving the groomed area and moves about 20 meters in the deep snow between the slopes Biche and Mauduit.

"Both sides of the groomed slopes are marked with flags. Has Schumacher not seen the instructions? Unclear.

"What is certain is that between 10.50am and 11am — around a quarter of an hour earlier than previously thought — misfortune struck. Schumi, also wearing upper body protectors in addition to his helmet, hits a rock covered by the snow."

The paper also speculated that the German driving star had been distracted for a moment as he was irritated by the binding on a boot and could not break his fall with his hands.

The rented skis he was on during the fall in Meribel on Sunday are being checked to see if they were defective.

The former Ferrari and Mercedes driver remains stable but critical in hospital in Grenoble, where he is in an induced coma battling brain injuries.