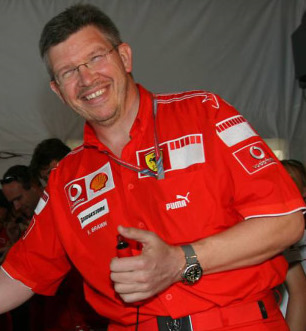 UPDATE #3 This rumor is now upgraded to fact. As predicted, Mercedes on Thursday confirmed reports team boss Ross Brawn is stepping down.

In a media statement, the Brackley based team said the 58-year-old, to officially depart Mercedes on the last day of the year, "has chosen to hand over" the reigns to Toto Wolff and Paddy Lowe.

"We have had long discussions with Ross about how he could continue with the team," said chairman Niki Lauda, "but it is a basic fact that you cannot hold somebody back when they have chosen to move on."

Brawn's next step is not known, but it is believed he will take a few months off before possibly returning to F1 with McLaren's 2015 engine supplier, Honda.

The MERCEDES AMG PETRONAS Formula One Team today announced that Ross Brawn will step down from his position as Team Principal at the end of 2013.

Ross Brawn, who will formally leave the team on 31st December 2013, said:

"The most important consideration in my decision to step down from the role as Team Principal was to ensure that the timing was right for the team in order to ensure its future success.

"The succession planning process that we have implemented during this year means we are now ready to conduct the transition from my current responsibilities to a new leadership team composed of Toto and Paddy.

"Mercedes-Benz has invested significantly in both the personnel and infrastructure at Brackley and Brixworth. Thanks to the one-team approach we have implemented between the two facilities, the team is uniquely positioned to succeed in 2014 and I am proud to have helped lay the foundations for that success.

"However, 2014 will mark the beginning of a new era in the sport. We therefore felt this was the right time to simultaneously begin a new era of team management to ensure that the organization is in the strongest possible competitive position for the years to come.

"We can take pride not just in our on-track achievements but also in the organization we have built at Brackley. In its different guises over the past six seasons, this team has delivered some of the most memorable moments of my career. Our second place in this season's Constructors' Championship is an important milestone on the road to championship success.

"I am confident that the future will hold just as much success for the team and will take real pride in having played my own part in those achievements."

"First of all and most importantly, we must say thank you to Ross. When you consider the step that has been made from finishing fifth in 2012 to the second place that we have secured this season, he has been the architect of this success. He put the plans in place to recruit key people since early 2011, and the performance this season shows that the team is on the right track.

"We have had long discussions with Ross about how he could continue with the team but it is a basic fact that you cannot hold somebody back when they have chosen to move on. Ross has decided that this is the right time to hand over the reins to Toto and Paddy and we respect his decision.

"Toto and Paddy are the right people to lead our team in 2014 and beyond."

Dr. Dieter Zetsche, Chairman of the Board of Management of Daimler AG and Head of Mercedes-Benz Cars, concluded:

"Last winter, we restructured the management of our Formula One activities, with the support of Niki Lauda. The first step was to convince Toto Wolff to join us to run our Mercedes-Benz motorsport activities and our Formula One company. The second step was the recruitment of Paddy Lowe during 2013.

"This gave us a clear succession plan for the time when Ross decided to step down from his current role, and that time has now come. I have every confidence that Toto and Paddy will build on Ross' good work and that they possess exactly the balance of skills required to lead our team to world championship success.

"I would like to personally thank Ross for the calm authority with which he has led our works team since 2010, for his crucial contribution to our team's development and also for the undoubted share he will have in our future success. It has been a pleasure working with him over the past four years and I extend all my very best wishes to him for the future."

11/28/13 (GMM) Mercedes will announce on Thursday that Ross Brawn is leaving the German team.

Brawn, 58, has been the Brackley based team's principal since even before the Stuttgart marque took over in 2010.

But Paddy Lowe, the former McLaren technical director, arrived at Mercedes earlier this year and has always been in line to succeed Brawn.

Mercedes team chairman Niki Lauda reportedly tried to keep Brawn on board in a new role, but the Briton has pushed ahead with his decision to leave.

Germany's Bild said Brawn announced his decision to team staff at its Brackley headquarters on Wednesday.

The news will be made official on Thursday, the major daily newspaper added.

Bild added that Lowe will now split Brawn's responsibilities with Austrian Toto Wolff, with triple world champion Lauda continuing to oversee the board.

The report said Brawn will take some months off to indulge his passion for fishing, but that there is a "very good chance" he will return to F1 with McLaren's 2015 engine supplier, Honda.

11/26/13 (GMM) An announcement about Ross Brawn's departure from Mercedes is now imminent.

Germany's normally-reliable Sport Bild says the news is coming "later this week", at the end of a period of strong speculation that the Brackley based team will install Paddy Lowe as the new boss.

Mercedes, and particularly chairman Niki Lauda, have made efforts to keep 58-year-old Briton Brawn on board in another role.

But the big rumor is he could be headed back to Ferrari, where as technical director he presided over Michael Schumacher's ultra-dominant cars of last decade.

"Let's see," Brawn told the British broadcaster Sky on Sunday in Brazil, after he was spotted meeting in Stefano Domenicali's Interlagos circuit office.

"We will advise everyone in good time, but it's a pretty exciting year next year, so let's see what happens," he added.

Asked if Brazil was in fact his 'goodbye' to F1 altogether, Brawn smiled as he insisted: "(This is) not an answer."

11/23/13 (GMM) Ross Brawn is being linked with a sensational return to Ferrari.

Mercedes' current team boss, who was technical director at Maranello during the ultra-successful Michael Schumacher era, was spotted meeting with Stefano Domenicali in Ferrari's hospitality area at Interlagos on Friday.

Briton Brawn, 58, has been considering his future at Mercedes, with the Brackley based team expected to eventually replace him with Paddy Lowe.

"Ross will step back at some point," Lowe admitted in Austin a week ago. "At the moment we're waiting for Ross's call on that."

So the big new rumor is that Brawn could return to Ferrari, to lead the fabled Italian team that despite having Fernando Alonso at the wheel has failed to win the title in recent years.

Asked on Friday if he is prepared to step into an overseeing role so that someone else might be team boss, Domenicali told Britain's Sky broadcaster: "Of course.

"If I see that is the best solution I will do it even tomorrow, 100 per cent.

"Also I have bosses on top of me that may take that decision. At the end of the day the most important thing is that Ferrari has to become the standard for formula one once again," the Italian added.

Asked specifically if he would be happy to work hand-in-hand with Brawn once again, Domenicali said: "I cannot answer that question because whatever answer I give, there will be a lot of titles on the newspapers.

"I have such a respect for Ross, as a friend first of all, and as a professional that, really, let's wait and see."