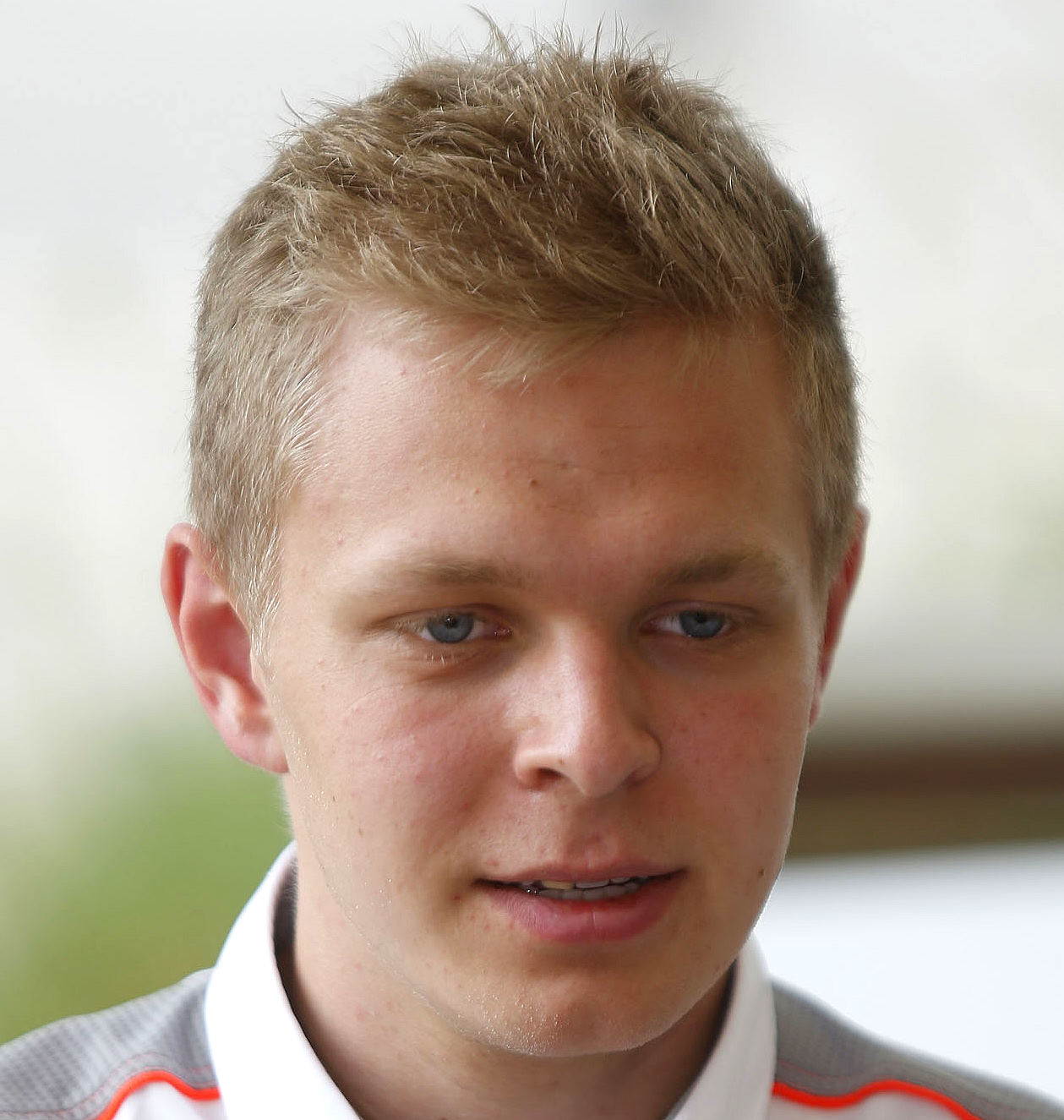 UPDATE #5 This rumor is upgraded to 'fact' with today's news.

11/12/13 (GMM) Martin Whitmarsh has not denied mounting speculation that Sergio Perez will be ousted by McLaren after Brazil's 2013 season finale.

Team sources are being cited by a growing number of authoritative publications as having revealed that Mexican Perez will be replaced by the McLaren-backed youngster and new Formula Renault 3.5 champion, Kevin Magnussen.

"Lots of people are being considered," team boss Whitmarsh, when asked about the rumors, said during the regular Vodafone teleconference on Monday.

23-year-old Perez's chances of keeping his seat appeared to have risen after a strong result in India, but he then struggled in Abu Dhabi.

"He's done a pretty good job throughout the whole year," said Whitmarsh. "Abu Dhabi was difficult. It was not quite the result that we wanted and he wanted but difficult weekends happen.

"I think overall he's done a good job and we're still talking to him."

He acknowledged the media speculation about Magnussen, the son of former F1 driver Jan, but insisted that McLaren's decision is not yet made.

"The fact is at the moment we haven't confirmed our driver lineup, we haven't signed contracts with drivers, and we're still talking about that," said Whitmarsh.

The mounting rumors about the identity of Jenson Button's 2014 teammate, and Whitmarsh's vague comments, coincided with Perez admitting in Mexico that 2013 has been "the most disappointing season in my career".

"It's my third year in formula one and has been my most difficult year, the most disappointing season in my career," he is quoted by EFE news agency in Toluca, about 50 kilometers from Mexico City.

Perez added that the season was also "very frustrating" and "probably the worst season in history" for the successful McLaren team.

He said he has felt a "heavy responsibility" this year but argued that his contribution was limited "with a car that bad".

Kevin Magnussen is now the favorite to land the second 2014 seat at McLaren, following a series of meetings at the team over the past week.

Although it had appeared in Abu Dhabi that Sergio Perez was closing in on a new deal following some strong performances, his lackluster pace at Yas Marina prompted fresh questions about his future. With McLaren having made it clear for months that Perez's consistency was its main concern, the team evidently was unimpressed about how his race in Abu Dhabi compared to that of Jenson Button, who had been forced to pit for a new nose early on.

McLaren team principal Martin Whitmarsh stated publicly that Perez's result there was "disappointing," while deliberately praising Button's form on a weekend when the team had been expected to take a decent haul of points.

In the wake of that race, senior McLaren staff members are understood to have spent time this week evaluating the driver issue. Although no final decision has been made, sources suggest that there is now a widespread feeling within the team that Magnussen should be given the nod.

As well as winning the Formula Renault 3.5 championship this year, Magnussen has impressed McLaren in his two F1 test outings. Last month, Whitmarsh praised his pace amid a push to get him an F1 seat in 2014.

"He has had two runs in an F1 car [and] in Abu Dhabi, on his third flying lap, he did a time that was good enough for sixth on the grid, which is pretty impressive," said Whitmarsh. Racer.com

11/06/13 Kevin Magnussen is being tipped to join McLaren next season and partner Jenson Button, with Sergio Perez set to be axed, according to reports by British newspaper, The Daily Telegraph.

Magnussen, who is one of McLaren’s junior drivers, won the Formula Renault 3.5 Series title this year and is highly rated by the Woking-based outfit. Rumors linking him to Perez’s seat have also been intensified after his late decision to abort taking part in the Abu Dhabi GP2 Series test this week – his prize for winning the World Series by Renault crown.

“I'm in F1 to be world champion not just to be in F1. That is why I would happily take that chance. Because I believe I am capable of that."

Magnussen also reckons that in some ways the big regulation changes next year will be good for F1 rookies.

“It is more of a help, I think [rather than a disadvantage], because it will be more of a level playing field," added the Dane, who was quickest in the Abu Dhabi F1 Young Driver test twelve months ago and who also ran well at the Silverstone test back in the summer, “No drivers will have experience of driving these cars. It’s a very good opportunity for a rookie.

“It’s no secret that I want to drive for this team. It’s the best team in the paddock. It’s where I've wanted to race my whole life. Even when I was a small kid. But it’s out of my hands. I've done all I can do."

Perez meanwhile has done well in recent races, equaling McLaren’s best result of the season in India when he finished fifth.

However, despite that he has generally been outperformed by Button and that could prove decisive, although to be fair to the Mexican, the McLaren MP4-28 hasn’t exactly been the best car on the grid in 2013.

11/05/13
(GMM) It was believed McLaren is on the verge of confirming Sergio Perez as Jenson Button's continuing teammate for 2014.

But a report by respected correspondent Tom Cary in the Telegraph newspaper claims the Mexican rookie could still be ousted after just a single season with the great British team.

Reportedly, Perez would be replaced by another rookie, the McLaren-developed youngster Kevin Magnussen, who has just wrapped up the Formula Renault 3.5 series.

The son of former McLaren test driver Jan, the young Magnussen won a GP2 test as a prize for his 2013 title, but according to Cary he "pulled out" of the run at the last minute this week "for unexplained reasons".

McLaren team boss Martin Whitmarsh recently described Formula Renault 3.5 as "a much higher quality championship than GP2", and so the test may have been seen as a threat to Magnussen's reputation.

The newly-crowned 2013 GP2 champion, meanwhile, is Fabio Leimer. For the young Swiss, F1 is "as far away from Leimer as the moon", according to the veteran correspondent for Blick newspaper, Roger Benoit.

21-year-old Magnussen, on the other hand, is knocking loudly on the door, but it was expected he would make his debut for a team like Force India or Marussia.

"For me," he told Cary in Abu Dhabi, "if I can get a competitive seat in the first year I would prefer that.

11/03/13 Danish driver Kevin Magnussen looks a likely candidate to make up the step up to Formula One next season, maybe even replacing Sergio Perez at McLaren.

Magnussen and Belgian Stoffel Vandoorne are part of the highly-respected McLaren’s Young Drivers Program. The youngsters have been regarded as the hottest prospects to make the transition to the pinnacle of the sport.

Both Magnussen and Vandoorne race in the Formula Renault 3.5 series and the Dane won the championship this season. Magnussen joined the McLaren Young Drivers Program last year, while Vandoorne was picked early this year.

Magnussen looks the more likelier of the two to join the sport. The 21-year-old has previous experience of an F1 car, having taken part in the Young Drivers Test at the Yas Marina Circuit in Abu Dhabi, last November.

He was the quickest over the three-day test with a time of 1:42.651s, which impressed McLaren Sporting Director Sam Michael. He also earned the Superlicense needed to compete, after that test. Sahara Force India, Marussia and even Lotus have been linked with Magnussen, while even home stable McLaren cannot be ruled out.

McLaren team principal Martin Whitmarsh said that one of Magnussen and Vandoorne could be driving in Formula One next season.

“Possibly one of them will be in Formula One next season," Whitmarsh said at the Yas Marina Circuit.

Whitmarsh said both will be racing next year but did not reveal where and with which team.

“Yes, we are making progress on them securing a drive next year. I think both will be racing next year. We didn’t set out to have, perhaps, the two hottest prospects at the same time but I think that’s in effect what we have with both of them. They both deserve to be at the highest level and we’re working hard. I’m fairly confident that we’ll have both of them racing next year," he said.

McLaren could initiate Magnussen into Formula One through any of the midfield teams before he is taken on board as their driver in the future. But there have also been rumors that the Dane could replace Mexican Sergio Perez, although it looks remote.

If Magnussen does make it next year, he would follow in his father’s footsteps. Magnussen’s father Jan was a Formula One driver who drove from McLaren and Stewart. KhaleeljTimes.com