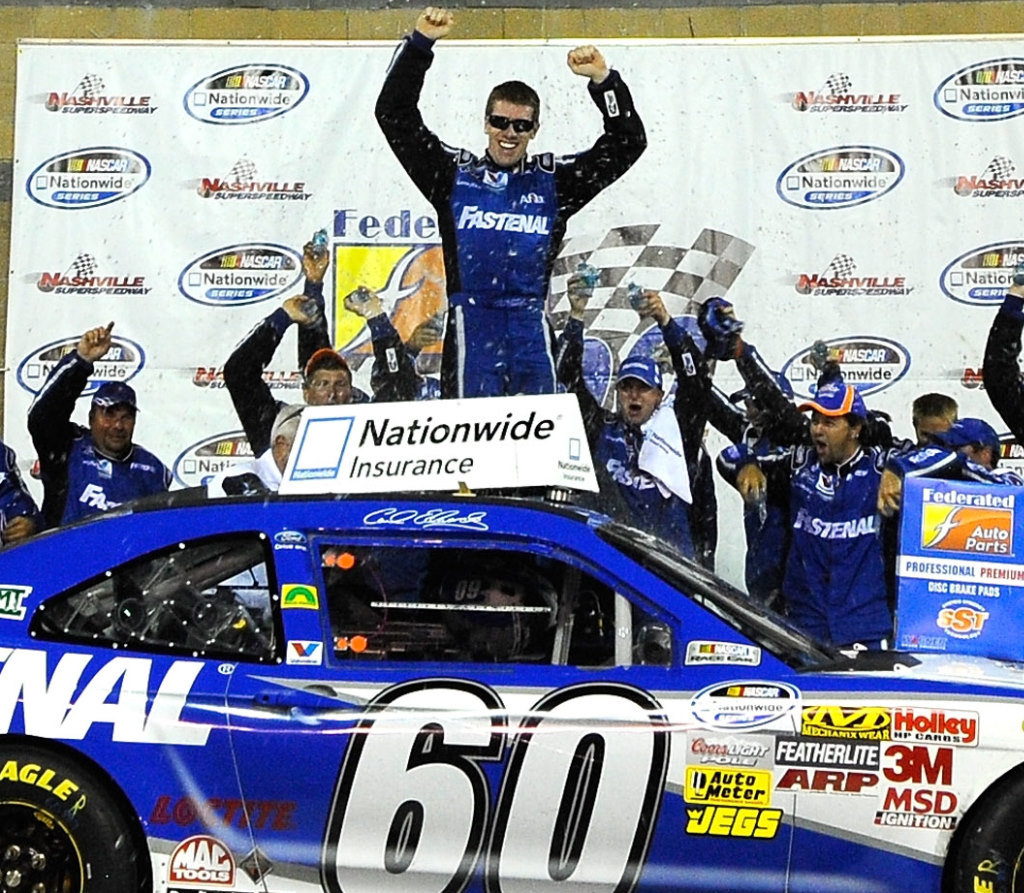 With NASCAR's Sprint Cup teams taking the weekend off, it was an opportunity for the Nationwide and Camping World Truck Series to shine on their own at the Nashville Super Speedway. Over the previous weekend we watched the grandson of a NASCAR legend make a very strong showing in Music City even though his victory splat in the grass didn't quite work out.

We watched a NASCAR veteran, with a very bad cold, prove why he's one of the best in the business even when he's not feeling well. Oh yeah, during one of the best NASCAR themed pre race invocations we've ever heard, a Baptist minister thanked the Lord for his "smoking hot wife." With those thoughts in mind let's begin with:

THUMBS-UP to Austin Dillon for an outstanding performance that led to winning the Lucas Deep Clean 200 NASCAR Camping World Truck Series race. The grandson of legendary team owner Richard Childress, made his winning race move with 23 laps to go in his Bass Pro Shops, black number 3, Chevrolet Truck owned by "Pop Pop." The young driver earned his third series win after starting from the pole position. 24 hours later he drove a Kevin Harvick Inc Chevrolet, in the NASCAR Nationwide Series event, and finished a strong third.

THUMBS-UP to crew chief Danny Stockman for that gutsy two tires only final pit call that gave his driver the track position to make that final race winning move. Stockman, just like his young driver, is also garnering a lot of well deserved attention in the NASCAR world.

Having said all that, WHAT'S-UP with that Major League Baseball slide into home plate the race winner tried to do in the middle of the speedway's grassy infield? After climbing out of his winning truck, Dillon ran towards the infield and attempted a head first slide through the NASCAR Camping World Truck Series' painted logo. He soon discovered that the thickness of the infield grass, intensified by the heavily lacquered paint, was not conducive for sliding. It turned out to be one of worst belly flops ever seen on live television. By the expression on the driver's face when he got up, it may have been a slightly painful belly flop as well.

All he wanted to do was add something different to the post race celebration. This extraordinarily talented young driver is going to win a lot of races in the future and they're going to need something different than what we witnessed to celebrate those wins. Perhaps Stockman and company can place one of those water powered slip and slides over the infield grass for their driver's next celebration. Even break dancing on the start finish line would have been better than that belly flop.

THUMBS-UP to "Concrete" Carl Edwards for winning the Federated Auto Parts 300 NASCAR Nationwide Series event in rather convincing fashion. Edwards has a phenomenal record on concrete covered race tracks and proved it by leading 124 of the race's 225 laps around the Nashville Super Speedway's 1.333 mile concrete oval.

Edwards' strong performance came despite the fact that he was suffering with a cold prior and during the race. But once he parked his Roush Fenway Racing Ford Mustang in victory lane, he said "I'm feeling a lot better now." The win also came despite a huge loss of track position when Edwards was penalized for speeding on pit road during a yellow flag pit stop. He restarted 14th. after serving the penalty, and regained the lead approximately 37 laps later. That's how strong this driver and car was during this race. Edwards also surpassed 1,000 laps led in the Nationwide Series and scored his sixth career Nashville win including five Nationwide Series wins in only 13 starts.

WHAT'S-UP with that horrible luck experienced by Elliot Sadler during the Nationwide Series race? Following a pit stop, during the final yellow flag period of the race, Sadler's Kevin Harvick Inc Chevrolet came off of the jack and began rolling down pit road when the driver announced over the radio "we're done guys." It seems that the tires were spinning when they came off of the jack and hit the ground. The result was a broken gear as well as a 30th place finish. Sadler and company also took a hit in the series' points profile falling from first to third.

THUMBS-UP to Sadler's team for repairing the problem in the garage area and sending their driver back to the race. He returned 31 laps down with virtually no hope of gaining an extra finish position or the points that might have came with it. So, why bother to return at all? The team knew that an effort like this was going to draw the attention of the ESPN broadcast team. That meant some extra national television exposure for their sponsor One Main Financial. The effort also sent the message: "you can't keep us down, we are going after the Nationwide Series championship." This is how high quality professionals think and work.

The final WHAT'S-UP of the week goes to the dog owner who let that cute little beagle get away and onto the infield grass of frontstretch area while the NASCAR Camping World Truck Series were conducting their practice session. NASCAR officials made quick work of presenting the red flag so the track crew could remove the puppy from the racing area. WHAT'S-UP with no fewer than five members of the speedway's safety crew having that much trouble catching this high speed canine? There was a point when these track officials actually resembled an old classic movie starring "The Keystone Cops." The little dog finally grew weary of all this merriment and simply laid down to rest. That's when it was retrieved and returned to its owner.

THUMBS-UP to this very cute puppy for turning faster laps than some of the start and park teams entered in the race. Or should that be start and bark?

Who says there is no "Chase" in the NASCAR Camping World Truck Series?

THUMBS-UP for those very beautiful. and very special, trophies presented to the Nashville Super Speedway winners. They are of course those beautiful guitars customed painted by Sam Bass, the official artist of NASCAR. Over the years I've spend a significant amount of time making my living in show business. I fully understand the feeling of owning and playing one of those fine, hand crafted, Gibson Les Paul Guitars. Add to that the beauty of a Sam Bass painting and it's no wonder these guitars are the most sought after trophies in NASCAR racing.

A double final THUMBS-UP goes to Pastor Joe Nelms, of the Family Baptist Church of Lebanon-Tennessee, for delivering one of the most memorable invocations, prior to a NASCAR race, ever heard. With a special prayer, heavily tinged with a NASCAR theme, Pastor Nelms thanked the Lord for all of the mighty machines on the race track and specifically thanked him for the Dodges, Toyotas, Chevrolets and the Fords. In a comment that must have made Jack Roush smile, Nelms thanked the Lord for the partnership between Roush and Doug Yates that created all of that engine power. He also thanked the Lord for the Goodyear Tires and Sunoco Race Fuel.
It's basically against human nature for us to start laughing during a prayer, but when Pastor Nelms reached the end of his invocation we just couldn't help it. He actually said "Lord I thank you for Lisa, my smoking hot wife, and for the blessings of our children Eli and Emma, (making a reference to the famed Earnhardt Racing family), our very own Little E's. It's in your name that we pray, boogity boogity boogity, amen."

Just as the invocation ended, the ESPN live television cameras caught Carl Edwards standing on pit road nearly doubled over with laughter. He was later overheard to tell team owner Jack Roush "I want that guy to do my funeral."