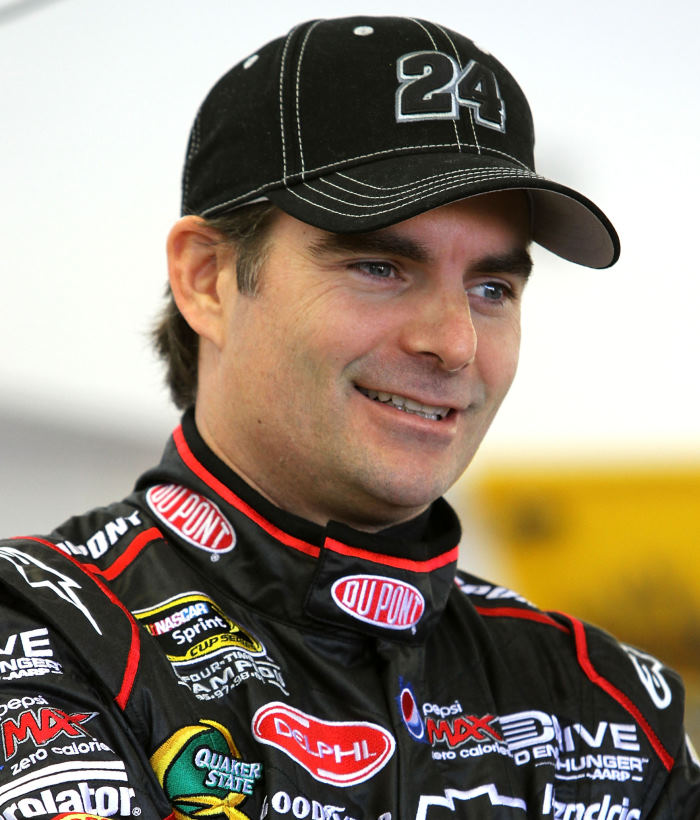 Don't expect Hendrick Motorsports drivers, and NASCAR champions, Jeff Gordon and Jimmie Johnson to hang up their helmets in order to become movie and television stars. That's not going to happen. But they did arrive in California early last week, prior to the NASCAR weekend at the Auto Club Speedway, to take care of some show business. Gordon was busy promoting his role in the upcoming movie "Cars 2" while Johnson was in front of the cameras to film an episode of the new television show "Breaking In."

"Cars 2" is a computer animated 3-D film that is a sequel to the critically acclaimed 2006 film "Cars." Once again the film is being produced by Pixar Animation Studios with film distribution by Walt Disney Pictures. Director John Lasseter returned to work on the sequel along with co-director Brad Lewis. The film has a scheduled U.S. release date of June 24th. Gordon plays the role of Jeff Gorvette in the movie and is rubbing elbows with some impressive cast mates. The film stars Owen Wilson, Larry The Cable Guy, Michael Caine and Emily Mortimer.

Last Friday Gordon talked about the movie, how much fun he had and the process of promoting its upcoming release. When asked if he had fun doing the movie, Gordon broke out in a big smile and said "oh my God, yeah, that was very cool. Again, it's a small part but I became good friends with John Lasseter. He is a huge NASCAR fan, he loves this sport. You would be shocked to know how much he follows this sport. I think he was one of the most excited people when I won at Phoenix."

Gordon also went on the say that it was a pleasure to watch Lasseter in his natural environment directing the movie because he's so good at what he does. "I totally understand how and why those movies are so good, so well done and so successful. He's so passionate about it. I was directed by him while I was doing my stuff and the things that he got out of me was stuff I could have never gotten out of myself. It was really cool to be a part of this and see him do his job. I have really only seen very little clips of the movie. All I saw was very rough so I am really looking forward to seeing how it all comes together."

Part of being in a feature film includes promoting the project and that's why Gordon arrived in southern California earlier than usual. He made a guest appearance on "Ellen" the extremely popular talk show hosted by comedian Ellen DeGeneres. Gordon said he was pleased with the appearance and added "I like Ellen a lot. I did her show one other time and really enjoyed it, it's a good show."

But Gordon admitted that he was nervous appearing on the "Ellen" and had a similar feeling when he recently appeared on "The Tonight Show With Jay Leno to promote the film. Explaining those TV jitters, Gordon said "you don't know exactly what's going to happen and what to expect. You kind of have an idea of where it may be headed, but you never know (for sure). They throw you a curve ball."

It's was a little surprising that Gordon would be nervous appearing on a talk show. In the past he has co-hosted "Live With Regis and Kelly", while filling in for Regis Philbin, a total of ten-times. Ã‚ Also on his television resume is the fact that he's the first, and likely only, NASCAR driver to host NBC's "Saturday Night Live."

When asked if he thought his children would recognize him in "Cars 2", Gordon smiled and said "it's funny because Ella sees me on TV and she hasn't quite figured out why I'm on TV. She understands the race car and that's what I do on the weekends. When I left she was like "good luck, go win the race," all these cool things. But as far as seeing me on TV, she doesn't quite grasp that. With the "Cars 2" movie it's not going to be my face, it's going to be my voice so it's going to be interesting to see if she recognizes my voice in that movie. If she doesn't, I'll be sure to tell here it's me."

While Jeff Gordon was busy promoting his upcoming movie, his Hendrick Motorsports team mate, and fellow NASCAR Sprint Cup champion, Jimmie Johnson was also busy in Los Angeles with an acting role in the upcoming television series "Breaking In."

"Breaking In" is an upcoming series set to air on Fox as a mid season replacement and is currently being filmed at the Sony Studios. The half hour workplace comedy stars Christian Slater, who served as the Grand Marshall for Sunday's Auto Club 400, along with Odette Yustman and Bret Harrison. Slater plays the role of Oz who leads an eclectic team of 20 something geniuses who work at a high tech security firm. They are assigned to break into computer security systems. The new series debuts on April 6th.

On his episode Johnson plays a character that is perfectly suited for him: NASCAR champion driver Jimmie Johnson. He spent the majority of the day, last Wednesday, in Los Angeles filming the episode. Describing the plot Johnson said there's a situation involving his race team and he goes to Christian Slater for help. "We have somebody that's on our (team) radio during the races and they affect me in a way to where I lose the race so we go to them for help," (no, it's not Kevin Harvick on the radio). "The whole episode is kind of built around the team and the car and it's going to be really cool, I'm glad to be a part of it," he added.

Johnson also said that the process of filming the show was a long day, although it really didn't seem like it, adding "once we looked at our watches, when we got out of there, it took a full day. We spent a lot of time just doing the same thing over and over. They would change cameras and get angles and close ups of each person involved. Five or six hours went by and we taped a two minute piece just for that. It was a long day due to the different scenes we ended up taping. Johnson also noted that there are some genuine characters in this show and there was never a dull moment on the set adding "I had a great experience with it, it's an edgy show."

When asked if he ever had any formal acting training Johnson replied "no training, trial and error. I guess the commercials we've shot have been my training ground of sorts. But this project is not Johnson's first acting rodeo. A few years ago he spent several days filming an episode of the television show "Las Vegas."

Again, don't expect either Jeff Gordon and Jimmie Johnson to hang up their helmets to become actors anytime soon. However it does appear that they are having a lot of fun in front of the cameras and hanging out with their new friends while playing in the land of make believe.