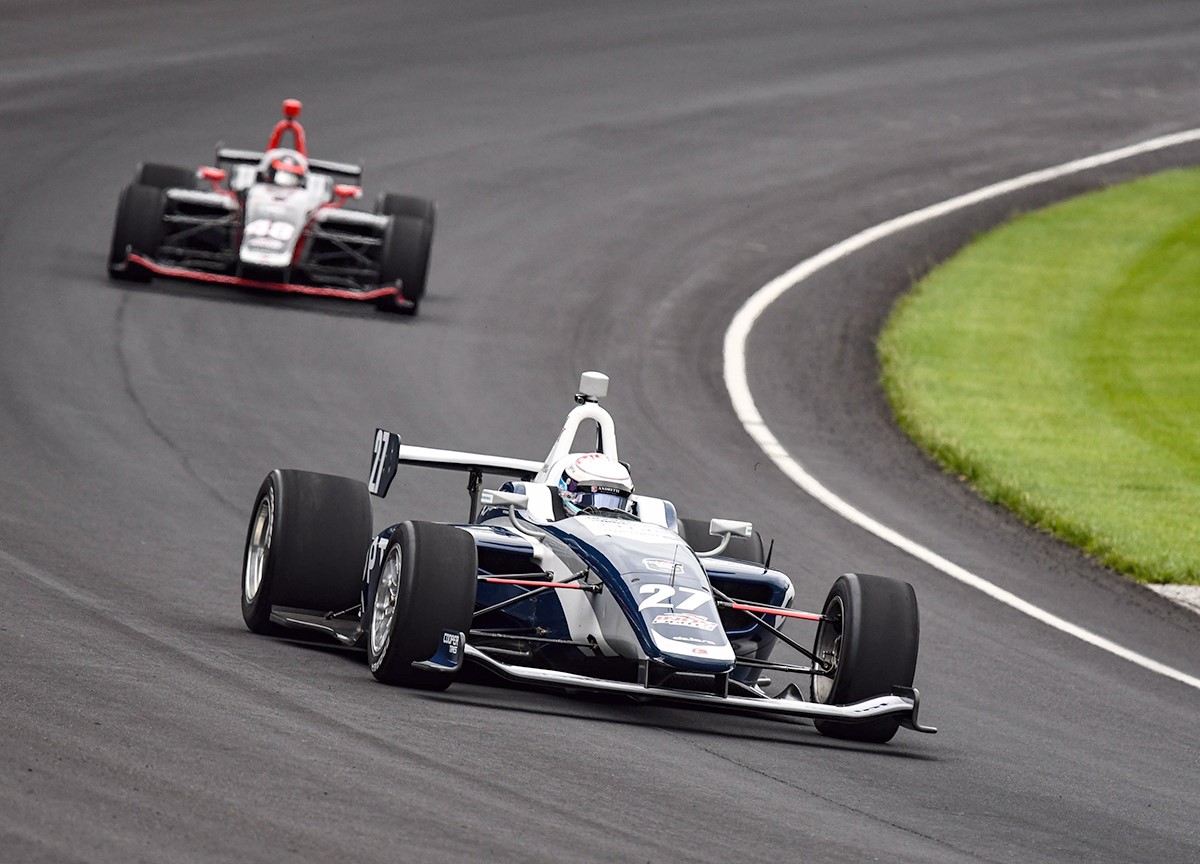 Andretti Autosport clearly found the perfect setup combination this afternoon during single-car qualifying at the Indianapolis Motor Speedway as Robert Megennis led the Indianapolis-based team to an emphatic sweep of the top four starting positions for tomorrow’s Freedom 100 Presented by Cooper Tires. Megennis, 19, from New York, N.Y., will start from the pole position for the jewel in the crown of the Indy Lights Presented by Cooper Tires season at the historic 2.5-mile “Brickyard" oval, with teammate Oliver Askew, from Jupiter, Fla., alongside on the front row.

Overnight rain and thunderstorms caused track activities to be delayed a little this morning, but the weather conditions improved dramatically to ensure the Indy Lights teams were able to complete their scheduled 45 minutes of practice in advance of qualifying. Megennis, who claimed his first pole – and race win – two weeks ago on the Indianapolis Grand Prix road course, laid down a marker by posting the fastest lap of 45.8135 seconds for an average speed of 196.449 mph.

Warm and humid atmospheric conditions allied to a blustery wind this afternoon that left several teams scratching their heads and ensured slower speeds for qualifying. But while some teams struggled, the first sign that Andretti Autosport had found the sweet spot with their stable of Dallara-AER IL-15s came when Andretti, running third as the qualifying order was set by the reverse of championship positions, jumped immediately to the top with a two-lap average of 192.822 mph.

Norman, who took to the track sixth in line, was the first to eclipse Andretti’s mark with a two-lap run at 193.033 mph. Then, after the two BN Racing/Team Pelfrey drivers, David Malukas, from Chicago, Ill., and Englishman Toby Sowery, posted respective averages of 191.304 mph and 192.178 mph, it was Megennis’ turn to take over at the top. His first lap was the first to top the 194 mph mark, and while his second lap was fractionally slower at 193.992 mph, it was comfortably enough to establish himself at the top with only teammate Askew and VeeKay yet to make their two-lap runs.

Askew’s first lap was fractionally quicker than Megennis’ two-lap average but, in common with all bar Malukas, who had been unable to turn any meaningful laps during practice due to a mechanical problem, his second lap wasn’t quite fast enough to prevent Megennis from claiming his second pole of the season.

VeeKay, the final runner, managed a two-lap average of 192.124 mph, mere fractions adrift of Juncos Racing teammate Dalton Kellett and Sowery, good enough for only ninth on the grid, but if there was any consolation, his two laps were the most consistent – separated by a scant 0.009 – of the entire field.

Robert Megennis (#27 Cybersecurity Dallara-Andretti Autosport Dallara-AER IL-15): “This is a dream come true, being on pole for the Freedom 100 at IMS. It’s going to be awesome tomorrow, to go out there on the front row in front of all those people. That’s going to be a moment. It was a lot hotter today than it was for Monday’s test so we had to figure out what the car would be in these temperatures and we did a great job with that. Andretti one-two-three-four, that’s wild, hopefully we can end the race like that and just control everything. But you can’t set expectations for the Freedom 100, you have no clue what’s going to happen. We can strategize all we want but you just don’t know – we’ll all talk tonight and see if we can work together to stay in front.

“But it did feel like a lot of pressure when I was sitting there waiting, but once I went out it was just foot to the floor and send it. The car was awesome; I can’t thank the team enough, as well as all my partners – Palo Alto Networks, Optic, CyberArk and SailPoint. I wouldn’t be here without them and I wouldn’t have this opportunity."

Oliver Askew (#28 Index Invest Dallara-Andretti Autosport Dallara-AER IL-15): “The car hasn’t changed much since Monday; the whole point was having clean air and where you drove the car that would make the difference. I am happy to be in a good spot for the first few laps, especially around all my teammates – we won’t take many chances and we’ll try to pull away if we can. Pole would have been awesome but positions are going to change so many times it doesn’t matter. I’ll just try to drive the fastest car on the racetrack tomorrow. You can’t think about the history, but to see all the fans will be great – though once they throw the green, you have to tell yourself that it’s just another race even though it’s more than that. You can’t think about where you are and what the result would mean, but I’d love to pay these guys back by kissing the bricks tomorrow. I’m trying to soak all this in now; I’m happy to have the opportunity to be here thanks to Index Investments, the Stellrecht Company and Andretti Autosport."