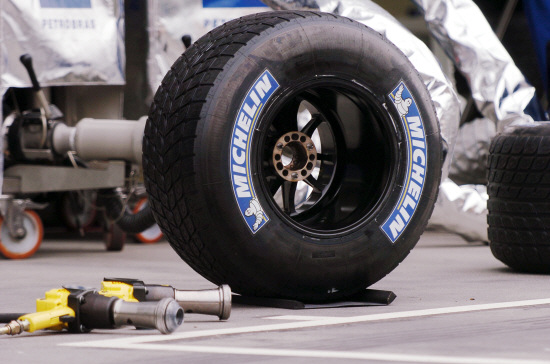 UPDATE #3 This rumor is downgraded to 'false' today. Bernie Ecclestone has moved to quash rumours that Michelin will replace Pirelli as Formula 1's sole tire supplier next season, after the French company contacted the FIA over the Belgian Grand Prix weekend to register its interest.

FIA President Jean Todt has been at loggerheads with Ecclestone over the choice of the sport's 2014 tire manufacturer for some time, with both known to be in opposing camps. Knowing that his rival faces the prospect of a re-election battle in December, Ecclestone downplayed the Frenchman's role in making the final decision, adding that there is no real interest from the teams in a Michelin return.

"FOM and Pirelli have a contract," he told Speed. "They [The FIA] are nothing to do with commercial. The FIA's position is that they are regulators. They regulate all the regulations that have been agreed. Jean is the president of the FIA. If it's a matter of a vote in the World Council, he has one vote. As it's not a matter for the World Council, it doesn't make a lot of difference.

"All the teams who have spoken to me say they are very happy with Pirelli, and the problems they've had, they're happy that they've dealt with them."

Ecclestone's position on any potential for a tire war also remains unchanged, with the 82 year-old opposed to the kind of scenario that saw Bridgestone focus much of its resources on Ferrari throughout the early 2000's.

"They will want to pick the teams that they think will win, and they'll pay them a lot more money to take them as opposed to somebody else. We have a deal with Pirelli, anyway."

(GMM) Bernie Ecclestone has confirmed reports from Spa-Francorchamps this week that Michelin wants to return to formula one.

"They do want to get back in," the F1 chief executive is quoted by Auto Motor und Sport, "but we have had contracts with Pirelli for some time."

Ecclestone is referring to commercial arrangements that have already been made with the sport's existing supplier.

But there is no such contract between Pirelli and F1's governing FIA beyond 2013.

That has ramped up the pressure on the already-frustrated Italian company, who said moves to change F1's supplier now would be "farcical".

"If Michelin wanted to return why didn't they come out and say so last September?" motor sport boss Paul Hembery told the Telegraph.

He was speaking at Spa-Francorchamps, where after Friday's punctures for Sebastian Vettel and Fernando Alonso, he had to show photographs to journalists to prove the problems had been simply caused by debris.

"We can't even get a flat tire now?" Hembery is quoted by Autosprint.

The French company has had discussions with governing body the FIA about taking over from Pirelli, high-level sources say.

Michelin, which last supplied tires to F1 in 2006, told teams it could produce the tires, despite the late notice.

There is widespread discontent with current supplier Pirelli among teams and officials in F1 following a series of problems this season.

Most seriously, the specification of the tires had to be changed to a more robust construction after multiple high-profile failures during the British Grand Prix at the end of June.

Michelin bosses are in favor of a return to F1, according to sources within the company, who say Ecclestone is to meet with Michelin director of motorsport Pascal Couasnon imminently.

A Michelin spokesman told BBC Sport the company would be "interested" in a return to F1, but said this would be contingent upon a change in the regulations.

Michelin would want a shift in emphasis in F1 away from the multiple pit-stop formula that has been provided by Pirelli's high-degradation tires, at the request of the sport's commercial supremo Bernie Ecclestone.

It believes the current approach in F1 runs counter to the growing requirement and demand for environmental sustainability in automotive manufacturing.

Michelin had initially demanded that F1 shift to 18-inch wheels immediately, but has now softened its stance and would be prepared to stick with the current 13-inch wheels for no more than two years.

It was initially thought Michelin was opposed to the idea of being a sole tire supplier with no competition, but the spokesman said that was not a problem "as long as there is a challenge within the regulations".

Michelin would want a chance to showcase its high levels of technology, including a tread-free 'slick' tires that can be used in wet weather.

Ecclestone has already signed a new commercial contract with Pirelli, who also have deals with a number of teams.

But these are worthless if the FIA does not appoint Pirelli as the tire supplier. BBC Sports

07/28/13 (GMM) Michelin has scheduled an announcement for the middle of next week, according to a report on Sunday by Germany's Auto Motor und Sport.

The report suggested the French supplier, last on the grid in 2006 as its tire war with Bridgestone ended, could announce its interest in bidding for an F1 tender.

The news might explain the long delay over news of Pirelli's continued participation as the sport's controversial official tire supplier, even though Paul Hembery insists plans for the 2014 season are well advanced.

Indeed, talks between the teams and Pirelli over 2014 have been speeding ahead this weekend in Hungary.

Pirelli have said they need to make the rear tires wider to cope with the higher torque of the turbo V6s, and Mercedes strongly agrees, but teams like Ferrari and Red Bull are fighting hard for the dimensions to remain essentially the same in 2014.

"We will decide alone," Hembery insisted, "no matter what the teams want. They just need to give us their data."

A big spanner in the works, however, could be the new Michelin factor.

But correspondent Michael Schmidt wondered: "Can they (Michelin) be ready for 2014? Surely not — it would be a very late call."

That is because the teams are scheduled to know the precise specification of the 2014 tires by 1 September this year.

Much more likely is that Michelin might announce F1 intentions for 2015.

Hembery is quoted as saying: "We want clarity this year.

"Our contracts with the rights holder and some of the teams are for the next five years.