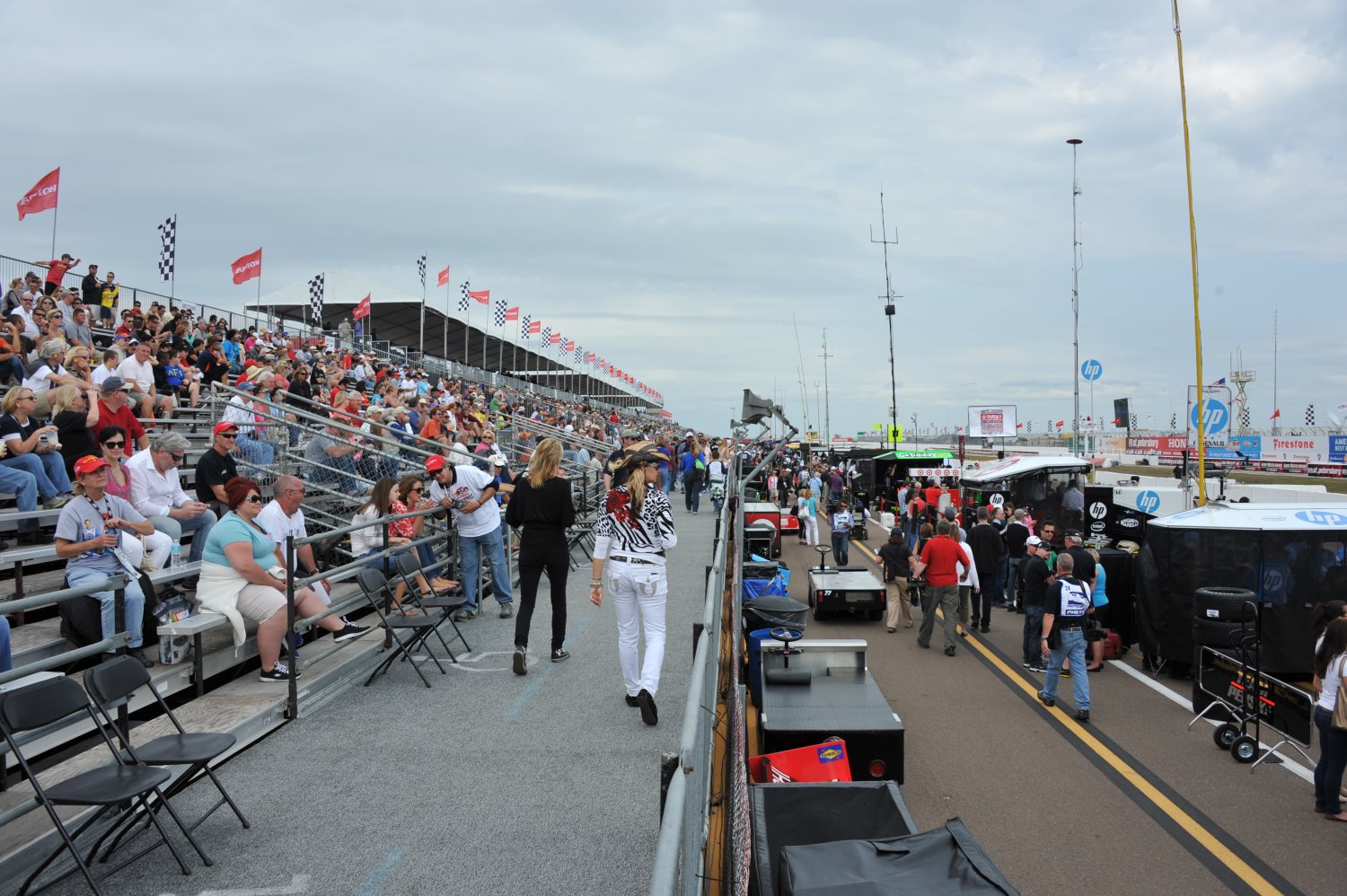 UPDATE #2 St. Petersburg officials estimate that “more than 100,000 people" attended the Honda Grand Prix over the three-day season-opening event. In Tampa, Mark Puente notes that figure “has grown from 65,000 in 2005." Tampa Mayor Bill Foster said that he “noticed more people at Friday's events this year than at any other day of the three-day events in prior years" Tampa Bay Times

03/23/13 The Saturday crowd here in St. Pete was by far the biggest we have ever seen, which bodes well for the race on Sunday.

iPads everywhere – Spotted Tony George using an iPad to keep up with all the news, as well as timing & scoring for his stepson Ed Carpenter. We also spotted a number of drivers with iPads in their cockpits – while in the pits they can keep tabs on timing & scoring as well as other team communication.

From what we hear there have been no changes to the car for IndyCar drivers to handle standing starts. As we saw in Champ Car, the drivers do standing starts out of the pits all the time, so a no-brainer apparently. We thought the first standing start was to be in the doubleheader in Detroit. However, rumor has it that may not be the case. In fact we hear there is talk of even trying it as early as Long Beach. Given the number of first turn accidents at St. Pete in the past where the rolling starts results in an accordion effect that results in contact in Turn 1 90% of the time, IndyCar should have used a Standing Start here in St. Pete. Will Power told us he did not even practice standing starts at Barber. As far as he is concerned they are ready.

Rumor has it that the city of Campinas, Brazil is keen on running an IndyCar street race, possibly in conjunction with a Brazilian Stock Car race. The city is 60-miles north of Sao Paolo. The city of 1 million strong is primarily a business town and their aim is to raise awareness of the City. There certainly is room for a 2nd IndyCar race in Brazil.

Another city that would like to have an IndyCar race we hear is Calgary, Canada. A purpose built road course is planned. Now that Edmonton is off the schedule, the chance for Calgary, to the south, has grown.

We hear the St. Pete race may be close to announcing a contract renewal with IndyCar. Look out for that.

We spotted a number of Houston GP folks at the race, including Austin B. Crossley, Director of Public Relations, Sarah Blanton, Manager of Marketing & promotions and advertising consultant RoShelle Salinas of LOVE Advertising, studying this event in preparation for their race in October. We hear the Houston GP is coming together well and ticket sales are off to a roaring start. Rumor has they are off to Long Beach next.

The race has great sponsors in the way of Shell (for 5-years who we hear may sell discounted tickets at its gas stations), Pennzoil (5 years), and most recently Honda as an associate sponsor who will doing something through their dealers and provide a newer show car. We hear they plan to diamond grind the race surface again to take out a lot of the bumps. Bumps in the braking zone make for great passing opportunities, but not when the bumps are as bad they were in 2006, the first year Champ Car raced there.

Don't be surprised if there is some sort of tie-in done between the Houston GP and Houston native AJ Foyt to help promote the race. It will not be a Grand Marshal role we hear, but something more long-term.

This is a bittersweet weekend for Firestone race boss Joe Barbieri who has been with Firestone for 40 years. This is his last race weekend before retiring. Joe was with Firestone's race program since 1991 with Indy Lights and was there when Firestone started testing for IndyCar in 1994. Another one retiring is longtime Firestone General Manager Paige Mader. Both are great guys and we wish them many happy days in retirement.

The former voice of the Indy 500 radio broadcasts and former CART TV anchor Paul Page is here. He left ESPN because the 30-race NHRA schedule was just getting too hard. As he nears retirement he is looking for something a bit easier. Maybe IndyCar, with its shorter schedule would be the perfect fit.

And James Hinchcliffe made a big deal, and rightfully so, that it's such a shame that Indy Lights only has 9 cars this year. There are so many drivers over in GP3 who go nowhere with their career, yet here the last five Indy Lights drivers have landed full-time IndyCar rides. And a number of them have landed part-time deals.

And can Tristan Vautier keep his perfect streak alive? He has won his debut race in every series he has raced in, and the rookie sensation starts a respectable 6th on Sunday. Don't count the Frenchman out, although winning on his IndyCar debut will be much harder than doing so in the lower series. Mark C. reporting from St. Petersburg, Florida.

03/23/13 See our feature article just posted on a Q and A session with IndyCar boss Mark Miles. We will have more behind the scenes IndyCar tidbits and update this rumor later today. Mark C. reporting from St. Petersburg.