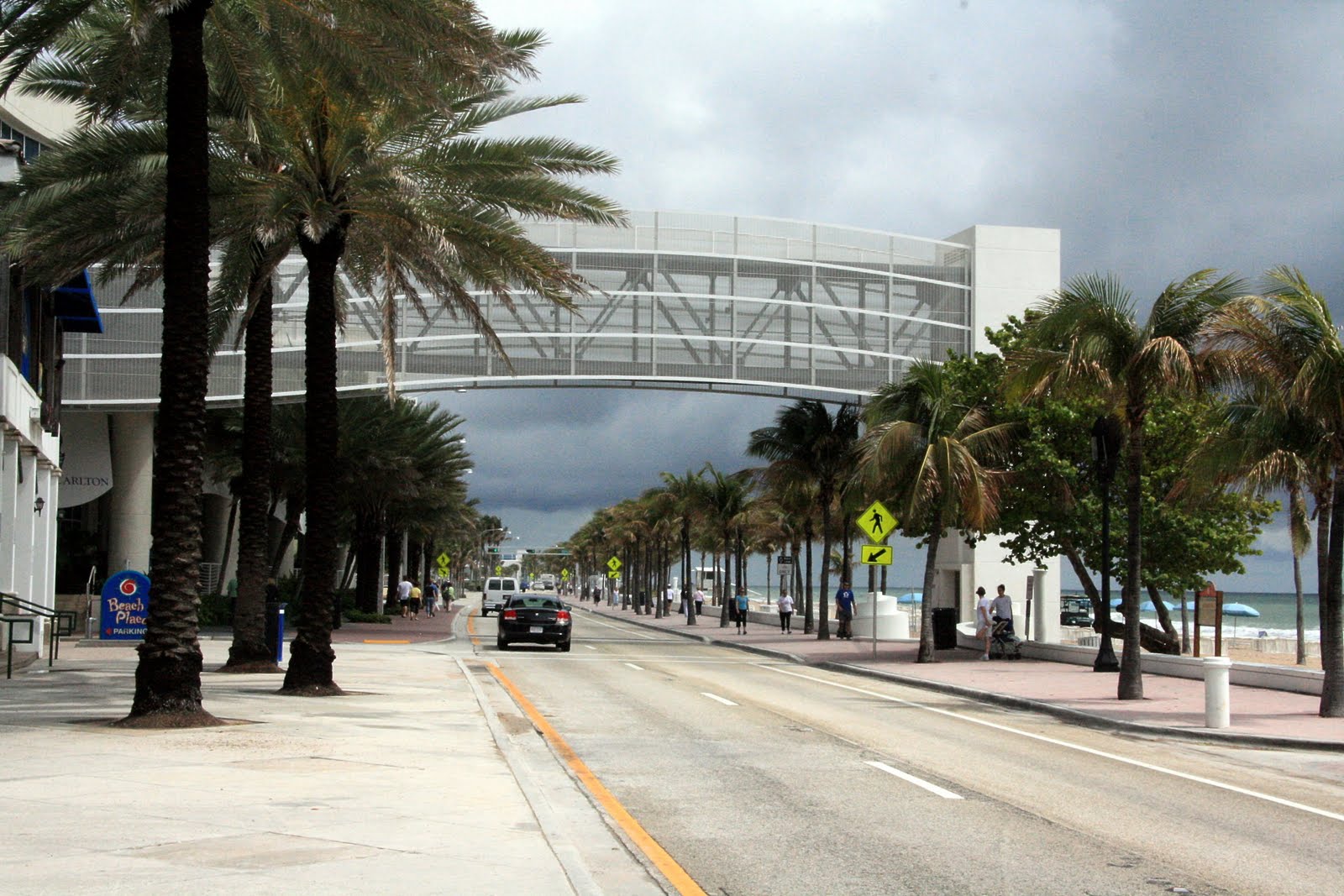 We spoke to Ryan Hunter-Reay about the progress being made on the Ft. Lauderdale street race. The biggest issue is the money required to move the sidewalks back along 1A (Seabreeze Blvd) to make the track wide enough. The sidewalks will have to be removed, the barriers put up and then when the race is over the sidewalk slabs would have to be put back in place. As you can see from the AR1.com photo to the right, the road is not as wide as it should be, and certainly not wide enough to place the barriers in front of the curbs. This work is expensive so it requires a race promoter who is willing to fork out a lot of upfront money for the initial infrastructure investment. Hence the delay in announcing the race.

03/22/13 Hello from St. Petersburg, Florida where the IndyCar series has assembled for their traditional season opener on the streets and airport runaway of this pretty Florida town. Friday brought temperatures in the Mid-70s under sunny skies.

Perfect racing weather, although rumor has it that there is a good chance of rain on Sunday for the race……..We ran into Paul Tracy who is now doing TV for the Sportsnet in Canada for their IndyCar race broadcasts……..In looking at the statue outside that the race unveiled with all the former winners on it, we noted that they left Paul Tracy off of it, we assume by accident. Someone needs to address that. we hear Paul's father is going better after health problems sidelined him last year. After smoking cancer sticks since he was 15 years old he eventually got cancer of the throat and tonsils and underwent treatment for that. Then he had a clogged artery, which resulted in a heart attack and had to have angioplasty to open up the clog. He is doing much better now.

Rumor has it that Ana Beatriz has been contracted with Dale Coyne racing to race at St. Petersburg, Sao Paolo and Indy.

They are still working on sponsorship for additional races. The person she shares the car with, Stephan Wilson, is rumored to be driving Barber, Long Beach and Sonoma with sponsorship from a California firm, but nothing is firmed up yet.

We did ask Ana, who is from Brazil, what she thought about IndyCar moving to Interlagos should F1 move to southern Brazil as rumored. She said, "I think it is better if IndyCar remains on the streets of Sao Paolo. It makes IndyCar unique in Brazil, and differentiates it from F1.

One thing that jumped out of practice 1 was Graham Rahal being 8 tenths behind James Jakes. We know it’s only P1, but still didn't see that coming. Well it turns out that Rahal only had 80% throttle, which will hopefully be ironed out for the next session.

Ran into Beaux Barfield, who, even with the change of leadership of IndyCar, remains IndyCar's Competition Director, while Brian Barnhart remains the Operations Director.

We bounced the idea of IndyCar going with a F1 type of passing assist system whereby the driver in front could not use Push-to-Pass (P2P) as a defense tool and the driver trailing must be within 1 second for it to work. F1 uses the DRS (Drag Reduction System), rather than P2P, but the idea is the same, create more excitement for the fans.

Some were in favor of it, others not.

Barfield thought it was a good idea, and said it could easily be done with a little added technology. "We could put a timing line before the longest straight and if a driver is within 1 second of the car ahead at that line a command would be sent to their car to activate P2P."

Over breakfast, Justin Wilson and Paul Tracy also thought the idea has some merit. Wilson liked the idea of stopping P2P's use as a defense tool.

JR Hildebrand and James Hinchcliffe both said that IndyCar does not need it. Both felt that the new system (no delay) is the way to go, but admit it can still be used defensively.

"I think it is too gimmicky," said Hildebrand. We had some great races and a lot of passes last year without an F1 type system. F1 cars are so dependent on aerodynamics that it is impossible for a car to get close enough to pass without some sort of assistance. Last year we had tons of passing. And also P2P is a bit of a risk. You only get 15 pushes so you must use them strategically"

Hinchcliffe likes that the P2P system could be used as a defense mechanism. "If you remember some of the great battles of all time, like Alonso and Schumacher at San Marino, was when there was a slower car in front and the driver behind had to work hard to get past." In other words, if both cars have P2P then they are equal and the driver behind has to use his talent to get past. "Maybe just on street circuits where it is next to impossible to pass would you use the F1 1-second system," said Hinchcliffe.

On a personal front, we here at AR1.com think that while the DRS using the wings is a bit gimmicky, we think taking the 1-second rule idea and applying it to P2P in IndyCar would be a great way to spice things up. Because the DRS makes such a dramatic difference, it is gimmicky. P2P does not give the driver behind as much an advantage.

Changing topics, Hildebrand's team is working more closely with Dreyer & Reinbold this year, which should help both. They are working as if they were a true 2-car team we hear and Timo Belli has come over from AGR to be technical director of it all.

We hear that over the winter Ed Carpenter Racing picked up three ex-Penske guys, three ex-Ganassi guys, and two from KV Racing……so the team should be stronger this year.

Rumor has it that this year's Firestone tires, especially the softer reds, will be more aggressive this year. There should be a larger gap between the hard tire and the soft tire. We hear that the same street circuit tire will be used everywhere except Sao Paolo.

IndyCar has signed a two-year extension with Verizon Wireless that expands its sponsorship to cover the pole award.

The pole award contingency money and trophy will be for all 19 IndyCar races beginning with Sunday's season-opener through the streets of St. Pete.

Verizon will mark the award with a gold medallion on the rear wing endplate of the pole-winning car each week. The medallion will be changed to silver following the event, and each subsequent pole earned will be represented with a star on the medallion.