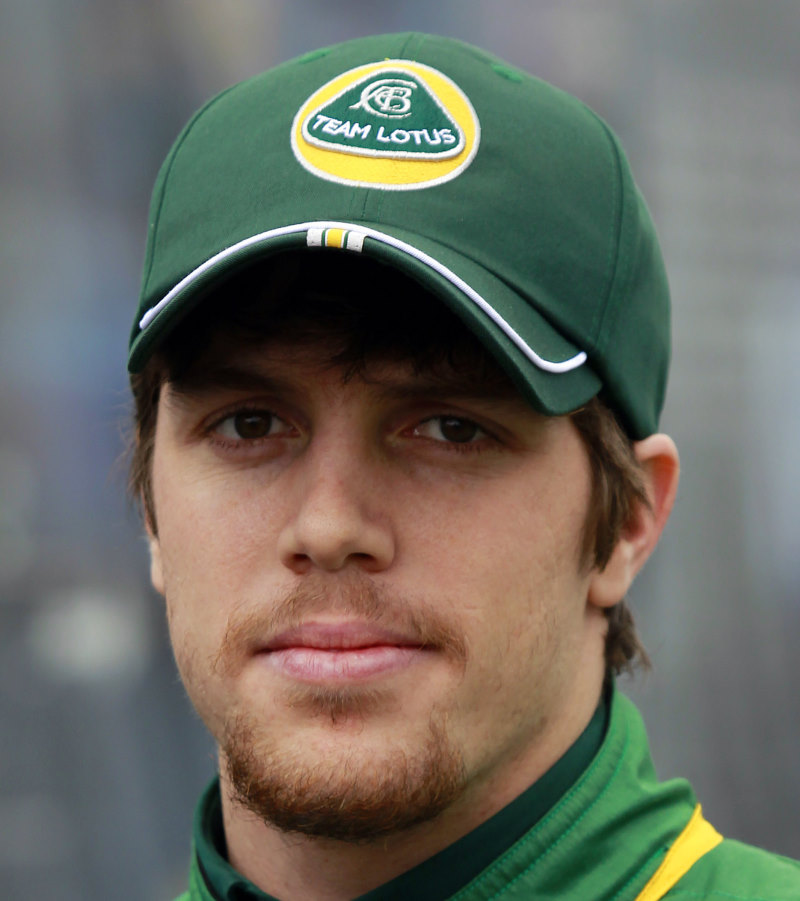 UPDATE #4 This rumor is downgraded to 'false' with today's announcement that Jules Bianchi has the rise.

This rumor is now downgraded to 'speculation' today. As the F1 teams prepare for the final pre-season test in Barcelona, Brazilian rookie Luiz Razia's formula one future appears in tatters.

The 23-year-old was left out of Marussia's entire schedule for the recent Barcelona test, with the team saying only that it wanted to benefit from the "consistency" of having Max Chilton in the car for every day of running.

Razia, however, confirmed there are "conflicts" relating to his 2013 contract, because of "parties with responsibilities".

He is almost certainly confirming rumors that his sponsors have missed payment dates.

Razia was quoted on Monday as saying his management expected to "solve" the problems in "a few days", but Marussia and Force India are the only teams yet to disclose their full driver schedule for the final four-day Barcelona test.

After arriving in Barcelona on Wednesday, he said: "I left a message on Luiz Razia's cell and got no return.

"(And) I only got the mailbox of Marussia's spokeswoman, Tracy Novak," added Oricchio. "Not a good sign.

"I have learned that there are indeed delayed payments between Razia and Marussia that prevented him from testing last week.

"Hopefully it's not the case," added Oricchio, "but it looks like it's the same now, which makes me question even more Razia's future in formula one."

Speed Week speculated that Indian Narain Karthikeyan could now be a contender for the Marussia race seat alongside Chilton.

Other sources say Ferrari-linked Frenchman Jules Bianchi is a possibility, given Force India's reported decision to sign Adrian Sutil for 2013.

The 23-year-old Brazilian, runner-up in last year's GP2 championship, will mark the news by testing Marussia's newly-launched MR02 car at Jerez on Wednesday.

The 2013 vacancy, now filled by Razia, opened up recently when Marussia split with Timo Glock, citing the need for a sponsored driver.

"Together with Max (Chilton), we are fielding a young but incredibly ambitious pairing and we look forward to seeing what they can achieve," said team boss John Booth.

When it was called Virgin, Razia was the team's reserve driver in 2010.

02/05/13 (GMM) Marussia are defiant in the face of strong speculation Luiz Razia has been picked to complete the team's driver lineup for 2013.

Brazilian rookie Razia, 23, has even announced the news himself on his official website and Twitter, but Marussia chief John Booth on Tuesday denied it is a done deal.

"Hopefully this week," he told Reuters, referring to the team's timeline for the announcement of Briton Max Chilton's 2013 teammate.

It was earlier strongly rumored that Razia was en route to Jerez for the unveiling of the new MR02, but the latest whisper is that his sponsors are yet to pay the first installment.

Booth denied that just because Razia is already talking about it, the deal is already done.

"That talking to the media is a dangerous thing, isn't it?" he smiled.

"Somebody put something on (the website) and it's fact straight away. We're talking to him."

Booth hinted, however, that another driver will be added to Marussia's Jerez test roster, because it's a "tough call" to expect rookie Chilton to bear the burden alone.

The other omens have also been ominous for Marussia ahead of 2013: the car launch featured only one driver, the livery features few sponsors, and Chilton crashed on Tuesday after a suspension failure.

It is also rumored the former Virgin team is the only one in pitlane without a bilateral Concorde Agreement.

Booth, however, insisted: "I think our position favors us quite strongly. We are very compact and with a sound business plan.

"It's not an easy game to be in formula one. But we believe we have a sustainable business plan and we're comfortable with where we are."

"I am negotiating with all three," the Brazilian told Agencia Estado. "Before, it was all the teams, now only these three."

The 23-year-old admitted his preference is Force India.

"There is still a chance to close (a deal) with them," said Razia, referring to the vacancy alongside Paul di Resta for 2013, even though Adrian Sutil is regarded as the favorite.

Razia said he is confident his talks will bear fruit.

"Fortunately, I have good relationships," he said. "Here (F1), it's not so much about what you deserve, but what you can get.