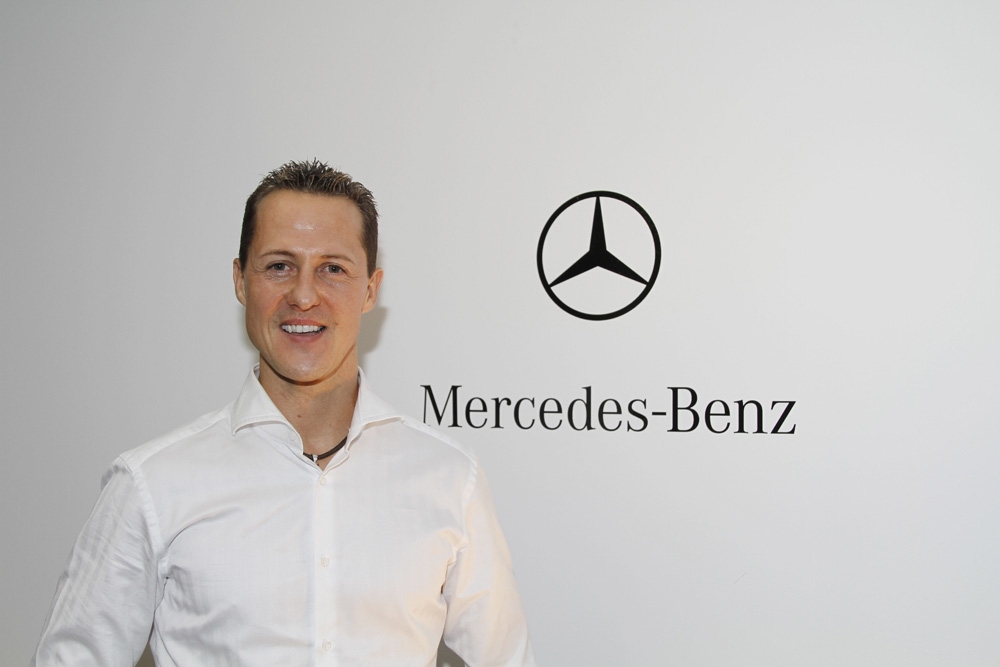 A couple of years back, I was in Indianapolis for the US Grand Prix, and I heard a radio ad that went like this…

“He is the highest paid athlete in the world, he has won four championships, his first name is Michael, but his last name is not Jordan."

That is a statement of what an amazing athlete and icon that Michael Schumacher is. When he retired, there was something missing from the sport, even with the entry of some great new talents. It was hard for us to measure them up without arguably, the greatest driver the racing world has ever known. Most indisputably, he commands the record books in every category, by wide margins that will likely never be surpassed.

Well, the margin of a few of those records is likely to get a bit wider, as Mercedes GP confirmed today that 7-time F1 World Driving Champion Michael Schumacher is emerging from retirement to race for the newly badged Mercedes Grand Prix team, formerly the Brawn racing team still run by Michael’s main architect of his multiple championships, Ross Brawn.

Michael is obviously cut from a similar mould as Brett Favre, Michel Jordan, and other countless legends that have realized that their life is quite empty without the constant challenge and triumphs that has defined most of their lives. Most times, when a legendary athlete returns from retirement, most people do not expect them to resume their top form. But as Brett Favre has demonstrated, even though they may not have the same edge that made them champions before, their very fabric finds a new way to get the job done.

Michael is no longer the young predator that allowed him to so quickly rise to the top of the sport at a time when many other legendary names were still racing, such as Ayrton Senna. We saw him evolve as a driver, showing more judicious and calculating style without losing anything on the stopwatch.

More importantly it gives the 2010 F1 season perhaps the deepest pool of driving talent ever. With Schumacher driving for the works Mercedes team with fellow German Nico Rosberg up against Fernando Alonso and Felipe Massa at Ferrari, Mark Webber and Sebastian Vettel at Red Bull, and Lewis Hamilton and Jenson Button at McLaren, 2010 will see 8 drivers with a real chance at the World Driving title.

Can Schumacher win title No. 8? Can he win 9 more races before re-retiring and reach the magical 100-win mark?

I don't know about you, but I can't wait to watch.

The MERCEDES GP PETRONAS Formula One Team can confirm today that seven-times Formula One World Champion Michael Schumacher will make his racing return in 2010 with the Silver Arrows team.

With seven Drivers' World Championships, 248 Grand Prix starts, 91 victories, 154 podium finishes and 68 pole positions, the 40-year old German needs no introduction following an illustrious and record-breaking Formula One career from 1991 to 2006 at the Jordan, Benetton and Ferrari teams.

Michael's return to racing with MERCEDES GP PETRONAS sees his return to Mercedes-Benz Motorsport where he began his racing apprenticeship as part of the Junior Program in 1990, racing in Group C sports cars and DTM, and sees Michael renew his partnership with Ross Brawn with whom he won all seven of his World Championships.

Michael Schumacher: ""MERCEDES GP PETRONAS represents a new challenge for me both in a sporting and a personal context. It is a new chapter in my racing career and I am really looking forward to working with my old friend Ross Brawn and my companions from my days with the Mercedes Junior Program. I am convinced that together we will be involved in the fight for the Formula 1 World Championship next year and I am already looking forward to getting back onto the race track. For me, this partnership closes the circle. Mercedes supported me for so many years when I began my Formula 1 career and now I can hopefully give something back to the brand with the star."

Nico Rosberg: "It is fantastic that Michael is returning to Formula One and will be my team-mate at MERCEDES GP PETRONAS. It's a great challenge for me to be up against one of the best drivers of all time. I'm sure that we will form a very strong partnership as he will have lost none of his speed! It is also great news for our sport and the fans."

Ross Brawn, Team Principal of MERCEDES GP PETRONAS: "I am delighted that we can confirm today that Michael will make his much-anticipated return to Formula One next year and drive for our MERCEDES GP PETRONAS team. As seven-time World Champion, Michael's outstanding record in Formula One speaks for itself and I am looking forward to working with him again. With the completion of our driver line-up, I believe that we now have the most exciting partnership in Formula One with Michael and Nico, who provide the perfect mix of talent, experience, speed and youth. We can now turn our full attention to the preparations for the new season and everyone at MERCEDES GP PETRONAS is extremely excited about the challenge ahead. With the investment and support in our team provided by Daimler, Aabar and our new title partner Petronas, and with two such exciting drivers, we have all of the building blocks in place to have another successful season in 2010."

Norbert Haug, Vice-President of Mercedes-Benz Motorsports: "In April 1991, when I had been in charge of the Mercedes-Benz Motorsport program for just six months, Michael was standing beside me on the balcony one evening. Without the slightest doubt, he said in a low voice: "It's about time that I got into Formula 1". Michael had just turned 22 years of age and four months later, he made his debut at Spa in a Jordan. Mercedes-Benz helped him to this point and the rest is history: seven World Championship titles, more than any racing driver, 91 Grand Prix wins, more than any racing driver. Michael has more of everything than every other driver. As part of the Mercedes Junior Program, Michael had raced in Group C sports cars and competed in a few DTM races. Ross Brawn, then our opponent at Jaguar, quickly realized Michael's talent and they went on to win all seven of his Drivers' World Championship titles together at Benetton and Ferrari. Our sporting ambition has always been that Michael should drive again where his professional career had started and Michael knew that. We often joked about it after the races and discussed the prospect seriously several times during the last 14 years in Formula 1. It didn't happen in 1995, it didn't happen in 1998 and it didn't happen in 2005. I am delighted that it will now happen in 2010. I am very much looking forward to working with Michael and everybody at Mercedes-Benz and Daimler extends a very warm welcome to our 'apprentice' of 19 years ago. That apprentice is now the most successful racing driver of all time."