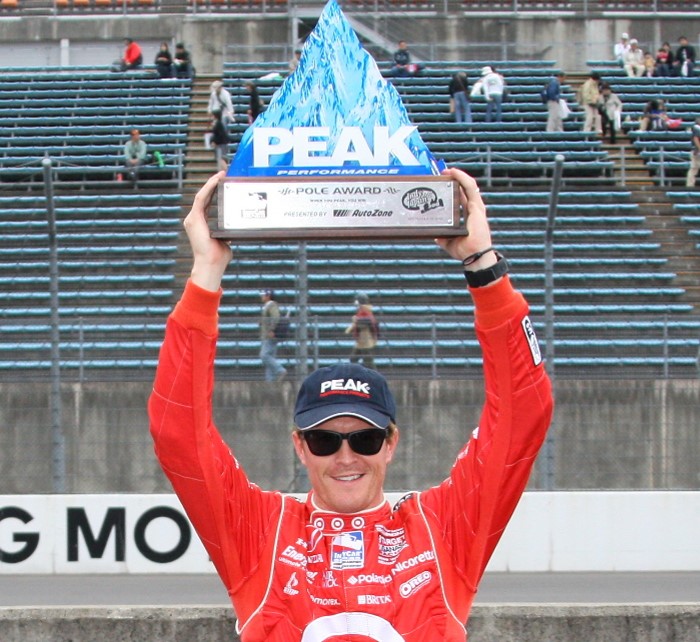 Two-time IndyCar Series champion Scott Dixon earned the PEAK Performance Pole Award with a dramatic qualifying run to win his first pole of the season at the Indy Japan 300 at Twin Ring Motegi.

Dixon, the 23rd and final driver to qualify, recorded a four-lap average of 202.031 mph to knock Mario Moraes from the top spot. More importantly, Dixon, who sits third in the championship point standings, claimed the bonus point that goes to the pole winner. He's 32 behind championship points leader Ryan Briscoe entering the penultimate race of the season.

Former Motegi winner Helio Castroneves and Tony Kanaan will start the race from the back of the pack. Castroneves made heavy contact with SAFER Barrier exiting Turn 4 on his third qualifying lap while Kanaan, who qualified 14th (198.560), was sent to the rear of the grid after the No. 11 Team 7-Eleven car failed post-qualifying technical inspection. Andretti Green Racing driver Hideki Mutoh also will start toward the rear after the No. 27 Formula Dream car made contact with the Turn 3 SAFER Barrier on his second qualifying lap.

SCOTT DIXON (No. 9 Target Chip Ganassi Racing): "I think actually the whole day for Team Target has been pretty decent. Obviously both in the second session, we were at the top of the charts. My car was definitely good in the first session. This morning we stuck with one set of tires. We didn't run another set like everybody else was just to try to save them for two qualifyings and practice, too. It's always hard to know what you're going to get out there especially when you have a couple guys that hit the wall, put All Dry down, things like that, the track conditions changing. I think they all seemed to be in our favor today. I think the track cooled off a little bit. There was no real wind. The car had a real balance. The outlook was nice to see when you see that come up on the dash and obviously you know you got to go a little bit quicker. But it didn't seem we had to pull out as much as maybe some of the others. The car was definitely quick. Hopefully it's consistent. We did a nice full-tank run in the second session, seemed pretty decent. We'll see what tomorrow brings."

MARIO MORAES (No. 5 Azul Tequila/Votorantim/KVRT, qualified second): "We have a really good car on ovals, and though It's a tough track I had a good car today. We were fifth (on the speed chart) in the second practice and I think we're going to have a good finish. KV Racing has been doing a great job."

DARIO FRANCHITTI (No. 10 Lifelock): We struggled this morning with the LifeLock car. We didn't have a good balance at all. The guys made some great changes on it from the first to second session. We were very happy with the car. Qualifying, my out lap leading to my first lap, I wasn't quite quick enough on that. I was a little concerned. Took one, two, three, four coming to the green. Ultimately that cost me some lap time. Still wouldn't have been quick enough to challenge Scott. He did a fabulous job there. Really impressive qualifying run. But we're starting close to the front. Yeah, it's going to be a long race. As Ryan says, hopefully it doesn't come down to a fuel race. But I think we're in good shape for that. I think our race car is better than our qualifying car right now.

RYAN BRISCOE (No. 6 Team Penske): Pretty good. Just a little bit loose on the first two laps. It wasn't really giving me of the confidence to get the throttle down out of Turn 4, so I left a bit on the table there. The car has been pretty good in practice. We had good, long runs today. It's going to be a tough race, it always is here. Hopefully doesn't come down to a fuel event, which it usually does, but we'll be aiming for it if that's the case. Hopefully we can still come out of here leading the points going into Homestead.

GRAHAM RAHAL (No. 02 McDonald's Racing Team, qualified fifth): "I really enjoy this track. The McDonald's car has been working well since the second we showed up. I'm definitely happy with that; I couldn't ask for much more. We're working hard. Obviously we still have room to develop but we're competitive and that's where we want to be. It would be great to get a win this year – that's the biggest think — and there is a great opportunity for us here since the car has been good since we showed up."

DANICA PATRICK (No. 7 Boost Mobile/Motorola, qualified sixth): "We're here to win so I'm a little disappointed with where we qualified. On my third lap instead of downshifting to fifth gear the car went all the way down to fourth. I'm not sure if it did it by accident or if it was an electrical problem, but I'm sure that affected my last lap. The car has been pretty good today, Eddie (Jones), my engineer, has done a great job and we were really strong in the last practice session before qualifying and made great progress. The entire #7 crew has been working hard and I think we'll be okay for tomorrow's race.

ORIOL SERVIA (No. 06 Newman/Haas/Lanigan Racing, qualified seventh): ""The car improved so much between the practice session and qualifying. The car had more in it than I was able to get out of it. Every lap I pushed more and more but I never got to the limit of the car even on the last lap so I'm pretty confident that there was a faster lap in the car. I'm not sure if the track was a lot better or we made the right changes. I am with a great team so I have to say they made the right changes. The good thing though is that tomorrow I have 200 laps to reach the potential. It feels like I have a great car under me and that's what we need to be consistent and get to the front tomorrow"

DAN WHELDON (No. 4 National Guard Panther Racing, qualified eighth): "It wasn't a bad run in the National Guard Panther Racing car today, we just have a little too much understeer on the exit of Turn 4. That's what we've been trying to dial out today, and we have a reasonable race car to be quite honest, and we did a long race run with the car earlier today, and it was good. I feel like we're well prepared for the race and might be just a little bit behind the Penskes and Ganassis on the longer runs. But for the most part, we're in pretty good shape. The key here is you've got to be able to get on the power real early coming out of Turns 3 and 4 and you've got to be able to drive the car in there really deep, as well. If you can get on the power early, and with confidence, coming out of there you can get a good run on people coming down the straight."

HELIO CASTRONEVES (No. 3 Team Penske): "My car was running smooth, but there was an unexpected understeer in Turn 4 and unfortunately it didn't work out the way I wanted."

HIDEKI MUTOH (No. 27 Formula Dream): "I don't know what happened. Maybe I pushed too hard. I am disappointed because I wanted to do well because it's my home race in my home country. I'm a bit sore but I'm OK. I have a great setup and we have a good strategy, so I am looking forward to the race tomorrow. I will do my best to move up to the front and finish the race with a smile."