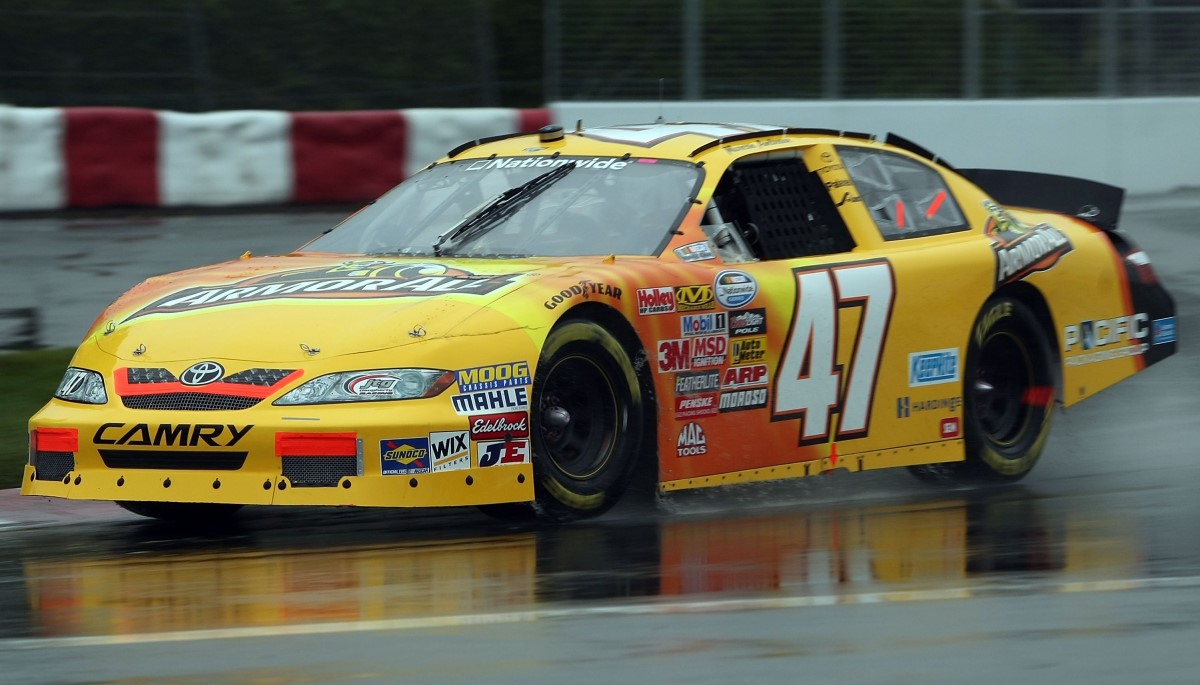 After watching Sunday's NASCAR Nationwide Series race from Montreal-Canada it appears that Christmas came early for Carl Edwards. The surprise win at the Circuit Gilles Villeneuve is sweet redemption for Edwards considering the fact that his debut in the Grand American Rolex Series, held the day before, was a complete disaster.

We also learned that Goodyear's rain tire has grip even on portions of the track that were dry.

It's very seldom that we begin this column with a WHAT'S-UP but Marcos Ambrose hasn't left us any choice in the matter.

WHAT'S-UP with the "Tasmanian Devil" giving away that race win? Ambrose was brilliant all day long. He led the most laps and completely dominated the event. He endured one restart after the other late in the race due to wrecks that were either caused by wet surface conditions due to rain or the actions of drivers getting way too aggressive.

But it all unraveled in the final turn on the final lap when the Ambrose Toyota hit the rumble strip coming out of turn 14. With the black and white checkers in the air, the car careened precariously close towards the front stretch wall. Unfortunately Ambrose left an open racing line that was wider than an eighteen wheeler. It was more than enough room for Edwards to slip by and steal the win.

That leads to a THUMBS-UP to Edwards for being a class act. During the final few laps of this race Edwards closed up on the race leader. On the final lap, heading into turn 13, he had easy access for activating the bump and run. He chose not to and you have to admire him for that.

However Edwards does get a WHAT'S-UP for triggering the final caution flag with less than three laps left in the race. In an effort to catch Ambrose he did a dive bomber move going into a turn and created a three wide situation that launched a multi car spin and wreck. Among the victims was his Nationwide Series championship rival Kyle Busch.

The ESPN2 broadcast team also noted that Edwards deserved the clean car award. In a race where drivers were running into each other left and right, there was hardly a mark on Edwards' Roush Fenway Racing Ford Fusion.

Speaking of Roush Fenway Racing, WHAT'S-UP with the engine blowing in Colin Braun's #16 Ford? It's understandable that a massive road course like the one in Montreal can be hard on equipment but this car only made three laps. That's very uncharacteristic for this team.

This week's THUMBS-UP for making chicken salad out of chicken do do goes to Kyle Busch who basically survived the race after getting collected a few times during the Nationwide Series race. This was especially true when he got collected in the melee that would turn out to be the final caution flag in the race. Despite the frustration Busch still managed to finish tenth.

Another THUMBS-UP goes out to Busch's pit crew for showing a magnificent sense of humor during adverse conditions. Busch made some contact with another car during the early portion of the race and had some damage on his left head light area. During an ensuing pit stop the team placed a tape patch on the damage but not before cutting it to form the shape of a smiley face. It's doubtful that Busch was in the mood to enjoy a good joke, but the smiley face looked terrific on television.

WHAT'S-UP with Steve Wallace? Rusty's son likely left Montreal with steam coming out of both ears following a full Sunday afternoon that had him dealing with one on track crisis after the other. That included triggering a multi car wreck after trying to go three wide into a sharp turn with only four laps left in the race. It also included at least three run ins with road racer Antonio Perez with some of that action appearing to be on the personal side.

Whether or not NASCAR racing in the rain is a THUMBS-UP or a WHAT'S-UP depends on an individual fan's perception as they were watching the events unfold.

First off a THUMBS-UP definitely goes out to Goodyear for being well prepared with their rain tire. The treaded tire proved that it had grip and even worked on some of the dried out portions of the track late in the race when the rain stopped. We even got to see the tire provide enough traction to allow a driver to remove his car from a gravel pit after a spin out.

Having said that: WHAT'S-UP with that on track action that occurred once the rain tires were put on? With 16 laps left in the race NASCAR sent the drivers to pit road where they were allowed a five minute period to get their cars rain ready. That process also included the installation of a windshield wiper, defrosters and brake lights.

What followed were three more caution flags for wrecks that occurred during the final 11 laps of the race. Whether or not that was due to a rain slick track, a driver's lack of experience racing in the rain or just plain old aggression while trying to pick up an extra finish position is hard to say. However the end of this race had the makings of a demolition derby judging from the way the cars ran into each other. It prompted driver Brad Keselowski to say afterwards "the experience turned race car drivers into dare devils."

The least case scenario tells us that NASCAR racing in the rain is a work in progress. The problem is: the only way to improve it is to race in the rain while hoping we don't see more of what happened during the final 11 laps of the Montreal race.

Let's also send a THUMBS-UP this week to Kyle Busch for his outstanding performance that led to winning the NASCAR Camping World Truck Series Friday night at the Chicagoland Speedway. Busch led 79 of the 150 laps and passed Todd Bodine with seven laps left en route to his second, consecutive, series win, his fourth of the season and his 13th career series win.

The final WHAT'S-UP of the week goes to Carl Edwards. Edwards and Marcos Ambrose were planning to make their series debut in Saturday's Grand American Rolex Series race in Montreal. They were scheduled to start seventh on the field in a Ford Dallara prepared by Doran Racing for the Daytona Prototype racing class. However, a rain soaked track caused Edwards to crash the Aflac Insurance sponsored car during the pre race warm up laps. Really Carl? The warm up laps? When that race car left the track and hit the tire barriers you could almost see the feathers from the Aflac duck flying through the air.

On the opposite extreme, but directly related, is the final THUMBS-UP of the week which goes to NASCAR Nationwide Series driver Brendan Gaughan who also made his Grand American Rolex Series debut in Saturday's sports car race. Driving a TRG Racing Porsche in the GT3 class, Gaughan and his team mate, road race veteran Andy Lally, finished second following a very impressive performance under very dire weather conditions.