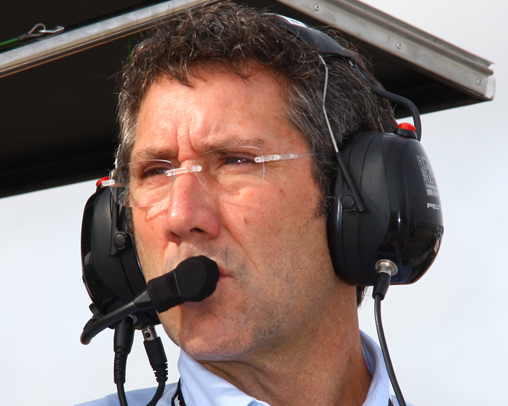 After having a week off from racing I have had a chance to relax and reflect on the events that have taken place over the last few weeks. I have decided to use the Vision Racing website, in a therapeutic way, to help clear my mind and clear the air by sharing some of my thoughts:

Settling into a different routine after 20 years has been quite an adjustment. I must say, it was neither something I was expecting nor something I had given much consideration to, but not unusual given the time in which we currently live. All around me I see that people’s lives are being affected by the realities of a deepening recession, and we all hope it begins to turn around soon and that better days are what lie ahead.

I would be less than honest if I said that last February 2008, after we were able to unify open-wheel racing, I didn’t at least let the thought of possibly “dialing back the boost" a little bit slip into my mind. However, I knew there would be a couple of more years of hard work ahead of us, as we had asked for and been given the opportunity to provide the leadership of the sport going forward. Knowing that there would be reservations expressed by some in our ability to lead, I had confidence that the right team of people had been assembled to take it forward.

Knowing that the decision made would be good for all concerned, we set out to do the nearly impossible and to bring about an immediate transition. It came at great expense and would not have been possible without the support from some great partners, but the majority of the heavy-lifting would be borne by our company. I knew that the historic start to the 2008 season would be rocky, but felt that by May things would start to sort out and the series would start to come together as one. That proved to be the case.

Most, if not all, of the early concerns expressed began to subside; many who had expressed their concerns began to provide positive reinforcement for the job that had been done bringing it together under challenging conditions.

Little did we know just how challenging it was going to become. The second half of the season rolled along while most started to look toward 2009 and the promise that, together, we could now really start to capitalize on the momentum we had been gaining all season long. Higher gas prices were starting to have an affect on race attendance, mainly at NASCAR events, as people were beginning to have to make choices between discretionary spending and providing for their basic needs. But IndyCar fans were still turning out in support of a unified series.

By the end of the season it started to become clear that our hopes of catching a tailwind from unification heading into 2009 would be met with more challenges. We were now going to have even stiffer headwinds brought about by the global market and financial crisis. By late fall the rumblings began that teams were going to be expecting financial support from the League if they were going to be able to compete in 2009.

Now, I don’t think it is a secret that most IndyCar and Champ Car teams have relied heavily on financial support from series owners to fund or subsidize their operations over the last 5 years. In fact, I know that in the case of the IRL, every team that has ever competed in the series, since inception, has received support to some degree. Given those facts, it is a testament to the commitment of the teams and sponsors in the series today that they have persevered this season without any subsidy from the League.

Important to note in all of this is, contrary to popular belief, our family does not have an endless supply of cash to continue to pour into the League in the form of subsidy. Rather, it is incumbent on the league to provide the leadership expected during this challenging economic time to grow the business, to grow the sport, and to position it for success in the future.

A good plan to start the year had been developed, but not before executive management had sufficiently challenged the business group leaders to re-examine their own budget planning process and goals for 2009. I had to convince my colleagues that the only way we could develop a comprehensive enterprise plan would be to have regular, frequent and transparent management meetings so each unit could see and understand the big picture. This is something that was going to require time, given how we had previously operated.

Anyone who has any aptitude at all for running a business would realize that the task of creating and following through with a successful long-term plan is something that takes a great deal of time and patience. While the plan has been put into motion, and positive growth is evident, it will require much more time and effort to fully see the plan through. This is a process that I had been committed to being a part of, even though others had different ideas of their own.

That being said, I continue to be perplexed by the board’s recent decision to relieve me from my responsibility as CEO of the enterprise. To date, I have not received a reasonable explanation as to why; the statement they released to the press not withstanding, I feel as though after 20 years I am entitled to one. I understand that maybe they don’t feel that they owe me an explanation.

One thing I can tell you is that I stood resolute in my conviction on the direction we needed to go and that the measures we have taken since January are only a beginning. A complete review of how we are structured and operate is necessary. Beyond my being dismissed, I am unaware of any changes that are being contemplated that will have a meaningful impact on the organization.

I have been replaced in my role as manager by two individuals who have been with the company for many years. In that time they have also been members of the executive management team and have participated in all of the strategic decisions that have been made over the last 15 years, so they are well aware of the challenges ahead. My question for the board has been not one of who is going to manage the company, but rather, who is going to lead it? There is a distinction.