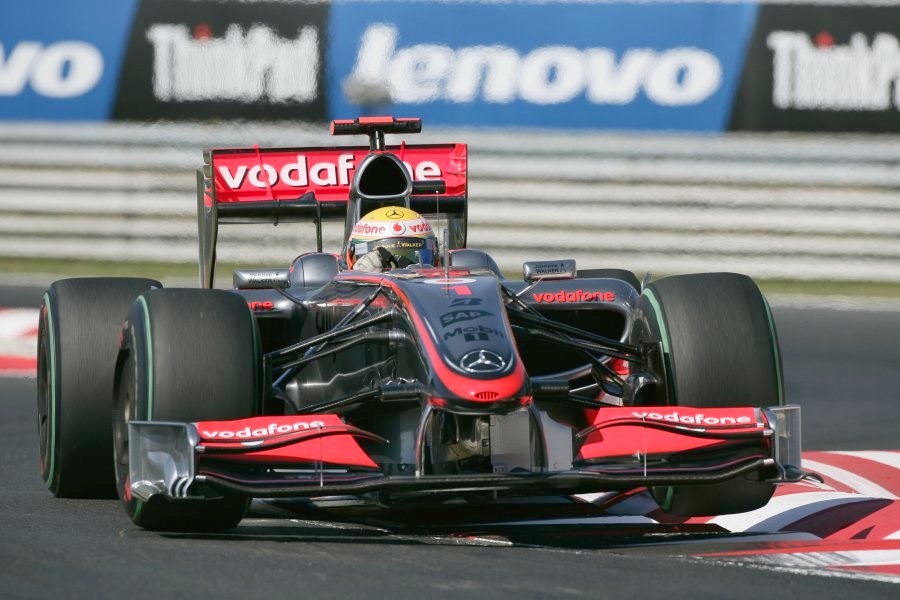 On what can only be described as a bizarre Grand Prix weekend that a saw wheels and a spring falling off cars, and one driver (Felipe Massa) seriously injured in a freakish accident, Lewis Hamilton claimed the first victory of 2009 in the Hungarian Grand Prix.

Ferrari took second place with Kimi Raikkonen while his teammate Massa is still in the hospital in an induced coma.

Mark Webber took third on a day when points leader Jenson Button could only manage two points for seventh. That result made Webber Red Bull's leading contender in the championship, for his teammate Sebastian Vettel retired with suspension damage, after a start line brush with Raikkonen.

As expected, the KERS cars surged forward off the line, with Hamilton squeezing past Webber into second behind pole-sitter Fernando Alonso, and Raikkonen jinking past the slow-starting Vettel to take fourth, making contact on the way past. The incident, which eventually forced Vettel to retire after he had limped through his first stint, will be investigated by the stewards after the race.

Alonso, on a 3-stop strategy, made his first of three stops on lap 12.

He rejoined but it immediately became obvious that his right front wheel was loose. The wheel flew off as he nursed the car back to the pits, and the damage eventually forced him out.

That left Hamilton clear to dominate the rest of the race from the front,

Hamilton proceeded to clinch his second Hungarian GP win, this after being eliminated in Q1 in Silverstone.

Title contenders Jenson Button and Sebastian Vettel both struggled: the Brawn driver just seventh at the checkered flag with tire wear problems, and Red Bull's Vettel suffering a hefty blow with a tumultuous race and retirement.

It was therefore Mark Weber smiling most, despite the Nurburgring pole sitter and winner finishing just third. The Australian leapfrogged his teammate Vettel in the drivers' standings, and closed the gap to leader Button to 18.5 points.

"It's a bit of a surprise — we expected to be a little bit quicker," said the Red Bull driver. "It was a pretty difficult venue for us. We knew we didn't have the advantage we had in the last two races.

"I'm pretty happy all in all. We're still very much a force," added Webber.

Vettel blamed Kimi Raikkonen, who finished second behind winner Hamilton, for his retirement. "In the first corner I had contact with Kimi," said the German, whose front suspension later failed.

The incident sparked the interest of the stewards, who are currently considering whether to penalize the Finn.

"I didn't notice that I had touched somebody," said the Ferrari driver, who also made contact with Hamilton at the first corner. "This is the first I've heard of it."

Webber, meanwhile, escaped penalty when his crew released him from a pitstop into Raikkonen's path.

Brawn's early-season dominance ended definitively in Hungary, after the team had blamed the cold circuit conditions at Silverstone and the Nurburgring.

"I don't think we can blame the weather," said Button at Budapest, where ambient temperatures hovered in the mid twenties on Sunday. "We've got to be looking in other areas."

At one point over the radio, the 29-year-old was heard to ask his engineer: "How can this car be so bad at the moment?"

The Briton told reporters: "Our car is not driving as well as it did at the start of the season. There's obviously an issue."

Pole sitter Fernando Alonso led early but retired after a problem with his right front tire, which fell off shortly after a pitstop. The Spaniard also told reporters he had a problem with the fuel pump.

Felipe Massa's pit crew wished the injured Brazilian driver a speedy recovery on the grid, holding up his pit board with the message: "Forza Felipe. Siamo con te" (we are with you).