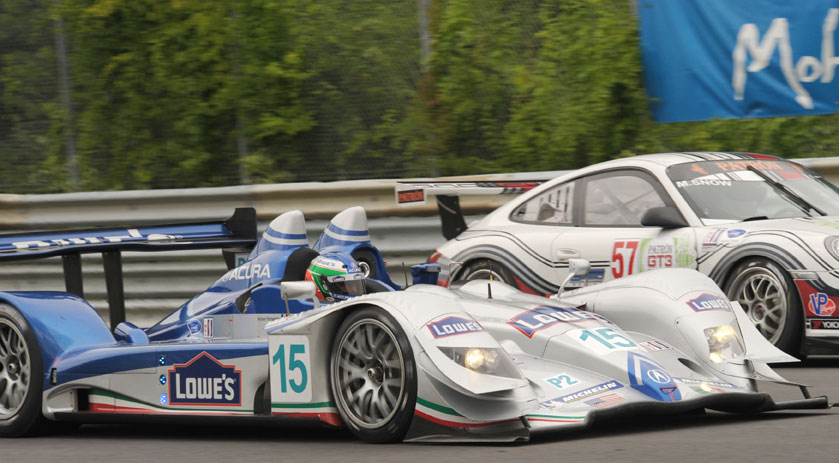 When it comes to auto racing, 12.7 seconds is an eternity, especially when it’s the differential in lap times between two cars in the same race. If you’re talking the Nurburgring’s Nordschleife, that’s roughly a second per mile. Road America? Three seconds a mile. But when you’re talking the 1.5 miles of pint-sized Lime Rock, well that’s more than eight seconds per mile.

Or to put it another way, when one car qualifies for tomorrow’s American Le Mans Northeast Grand Prix with a lap of 46.971 and another at 59.618 it means the faster car will be lapping the slower car once every four laps.

Based on today’s qualifying session, that’s what will be happening in tomorrow’s race as the lightning fast LMP1 and LMP2 cars thread their respective ways around a Lime Rock which will also contain a handful of American Le Mans Series Challenge Porsche 911 GT3 Cup cars. Added to the Series’ fields this year as an entry-level class for drivers, mechanics and teams (and also to increase an entry list hit hard – as were most race series – by the recession), the Challenge cars figure to live up their name at Lime Rock…both for the drivers of those Porsches and for their colleagues in the much faster GT2 and prototype categories.

One only need stand near the approach to the Diving Turn, the ultra-fast sweeper leading on to Lime Rock’s pit straightaway to appreciate the magnitude of the challenge. The prototypes, particularly the LMP1 Acuras, are made for turns like this. Their wings, underbody and various aero appendages pin the car to the road as they sweep through the downhill turn. That downforce, coupled with those massive tire contact patches front and rear that stick the car to the road, enable the Acuras to accelerate all the way through the turn and onto the straightaway.

In contrast the fastest of the GT3 Porsches is doing 120 mph at the apex. Ten mph may not seem like a colossal speed differential, at least from the comfort of your living room, but it’s quite a different perspective from cockpit of an Acura ARX-02a.

“I understand the different speeds of the different classes are a feature of sports car racing," said Gil de Ferran, whose teammate Simon Pagenaud put the XM Radio/Panasonic Acura on pole. “But the speed differential here is huge. It’s like putting Formula Fords on the track with Formula One…"

To their credit, the Challenge drivers have done an exemplary job so far at Lime Rock. While it would be a stretch to suggest nary a lap for the fastest classes has been compromised by the Challenge cars, in roughly an hour of observing practice and qualifying at Diving Turn, there weren’t any remarkable near misses caused by the slower cars. To that, Challenge pole-sitter Bob Faieta humbly praised everyone BUT the Challenge drivers.

“I enjoy racing with the bigger, faster cars," he said. “We’re not the ones overtaking; we’re the ones being overtaken.

“These guys have so much experience," he added. “I haven’t seen anything I haven’t liked out there so far. One thing is Gruppe Orange has an experienced spotter who gives us a heads up when faster cars are behind us, so I spend a minimum amount of time looking in my mirrors."

Adrian Fernandez, pole-sitter in LMP2, praised the Challenge drivers … without necessarily wholeheartedly endorsing the presence of the Challenge cars in the race.

“I have to say they’ve been good staying out of the way," he said. “At the moment they are doing what they can do. Their cars are just slow. It’s up to us to catch and pass them in the right place."

And there’s the rub. If last year’s Lime Rock race is any indication, traffic – and the ability to negotiate it efficiently – will be a major factor in tomorrow’s race; perhaps even the decisive factor.

David Phillips is one of North America’s most respected and renowned motorsports journalists. His ‘Another Turn’ feature appears regularly on americanlemans.com. The opinions expressed do not necessarily reflect the views of the American Le Mans Series.