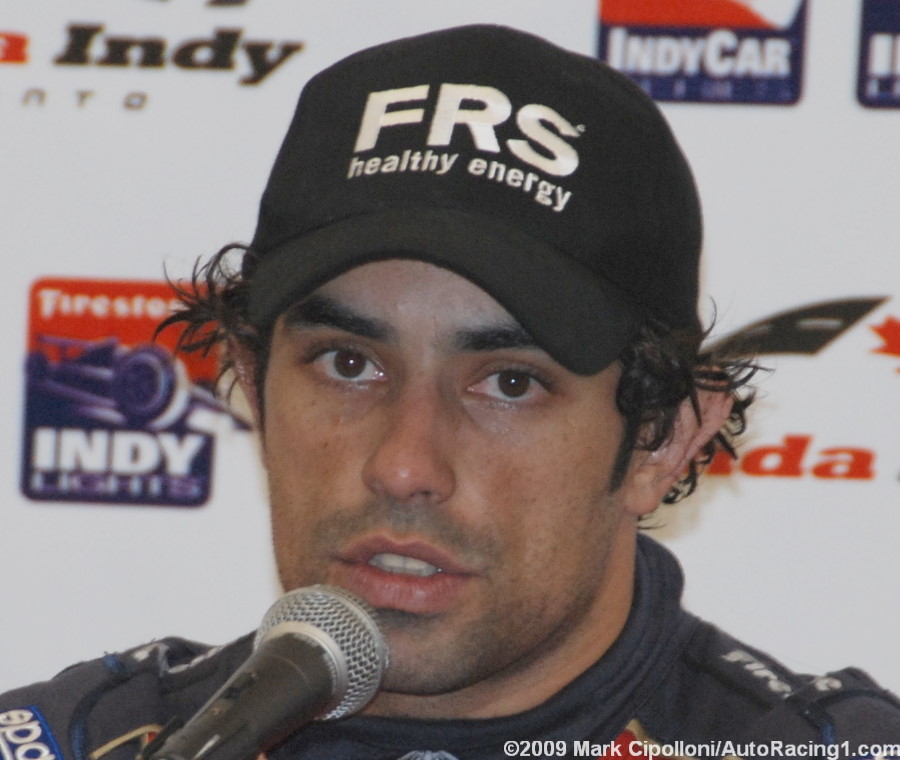 Rookie sensation Raphael Matos turned the fastest lap Friday in practice for the 23rd running of the Honda Grand Prix of Toronto IndyCar race, then promptly crashed to bring out the final caution in an incident filled afternoon practice session. Justin Wilson, winner last week at Watkins Glen for Dale Coyne stayed hot by slotting in 2nd quick just 0.2888s back. Will Power was third. Helio Castroneves, Marco Andretti, Danica Patrick, Paul Tracy and Helio Castroneves were among those that crashed or spun.

Matos, last year's Indy Lights champion, and before that champion in the Atlantic Series, has made several rookie mistakes this year, but at the same time has shown moments of brilliance.

"On ovals we don't have much of a chance against the Ganassi and Penske cars, but on the street and road courses like we have this weekend, the driver is much more a part of the equation so we have a good chance to do well."

Some credit has to go to his Engineer. Luczo Dragon Racing chief engineer Eric Zeto grew up about 10 miles from the Exhibition Place circuit. In fact, he could hear the cars each summer from his house. The son of Chinese immigrants, Zeto had never seen a race until he watched fellow Torontonian Scott Goodyear narrowly miss winning the Indianapolis 500 in 1992. He's been hooked ever since.

Zeto has been an engineer in open-wheel racing since 1998 and has participated in the Toronto race seven times, landing in Victory Lane with Paul Tracy in 2003 and 2006 with A.J. Allmendinger.

Robert Doornbos (1:01.8386) was fourth in the No. 06 Newman/Haas/Lanigan Racing car, while Team Penske's Ryan Briscoe (1:01.8420) was fifth. IndyCar Series points leader Scott Dixon was eighth in the No. 9 Target Chip Ganassi Racing car (1:01.9617). Scarborough, Ontario, native Paul Tracy, making his 17th start on the street circuit, was 13th on the chart in the No. 15 Ontario Honda Dealers/woundedwarriors.ca car for KV Racing Technology.

Drivers complained that the track has gotten bumpier since the Champ Car days but they didn't feel there was much difference between the two packages – "you drive the track the same way," said Wilson, "and the lap times are similar."

Danica Patrick described her frustrating day: "It's been a frustrating day for the #7 team. We didn't get in as many laps as we wanted to in the first session this morning. We made some changes that I thought were going to make the car better for the second session, but then I got into the wall at Turn 5 and we had to call it a day. I really needed to be able to spend some time on the track so I could get more comfortable with it, but that didn't happen. I hope we have a better day tomorrow."

With rain in the forecast tomorrow, qualifying may be a dicey affair as we saw in 2007 when Champ Car held their final race here on a wet weekend.

RAPHAEL MATOS (No. 2 US Marine Luczo Dragon Racing): "I'm very happy for the team and that we have a good car. We're a little bit frustrated with things today, but I'm sure the Luczo Dragon crew will do an amazing job again putting the car back together. I'm confident that the car will be perfect again. I'm looking forward to improving the car just a little bit more and trying to find a bit more speed to hopefully qualify up front."

JUSTIN WILSON (No. 18 Z-Line Designs): "The Z-Line Design Furniture car is doing really well. I'm really pleased with it. There's still room to improve it but we never got to do a proper run. We only got one lap on the new tires. I'm confident that we can ramp it up tomorrow and find some more speed."

HELIO CASTRONEVES (No. 3 Team Penske): "The Team Penske car was good today and we had a good lap going there in practice, but unfortunately when I downshifted, the car kept pushing and pushing and it wouldn't turn in and I hit the wall (in turn 5). Fortunately, there isn't too much damage. We still have practice tomorrow and qualifying as well and I think we can be strong there. It's great to be back in Toronto. The fans here are just amazing."

RYAN BRISCOE (No. 6 Team Penske): "I've really been learning the track today. I think we have a competitive car for Team Penske this weekend. The track is definitely bumpy and it's a challenging, very technical street circuit. I think it's going to be a difficult race for everyone to be consistent, but we still have some time in practice and qualifying to get to where we want to be. We're really excited to be back here racing in Toronto."

E.J. VISO (No. 13 PDVSA HVM Racing): "We came to a new place. It's not an easy place, it's very bumpy and you really need to make the car work a lot suspension-wise. We still have a little work to do on the car to make it faster. Also we were not able to go around with our new set tires that we obviously would've been faster with. But luckily tomorrow we have another test. Hopefully we can improve the car."

ROBERT DOORNBOS (No. 06 Newman/Haas/Lanigan Racing): "It was a good day, our best day so far. We ran a good free practice. It is good to be back here in Toronto. It's a great city and a great track. It's a bit bumpy so you have to get used to that in the first couple of laps but after a while you get into a rhythm. We made some good changes during the second practice. Even on old tires we were competitive so I look forward to a good day tomorrow."

WILL POWER (No. 12 Penske Truck Rental): "We were reasonably satisfied with third in the Penske Truck Rental car today while trying to find the right combination for qualifying tomorrow. I was struggling a bit under braking as I caught slower traffic and also while catching cars exiting the pits, but this should be better tomorrow with fewer cars on track. With rain potentially coming tomorrow, it could make things interesting."

RYAN HUNTER-REAY (No. 14 ABC Supply Co./A.J. Foyt Racing): "It was a pretty good day for us. We put the ABC Supply car in the top 10 constantly all day. We're not sitting where our performance actually is at the moment -at the end of the day we finished up 14th, but that's because we didn't get our run on new tires in when everyone else around us did. Hopefully we'll be able to carry that speed into tomorrow. We kept things simple today and it worked for us. I'm looking forward to tomorrow — it's possibly going to be wet. Racing around Toronto in the wet is definitely difficult so it should be an interesting day."

DANICA PATRICK (#7 Boost Mobile/Motorola): "It's been a frustrating day for the #7 team. We didn't get in as many laps as we wanted to in the first session this morning. We made some changes that I thought were going to make the car better for the second session, but then I got into the wall at Turn 5 and we had to call it a day. I really needed to be able to spend some time on the track so I could get more comfortable with it, but that didn't happen. I hope we have a better day tomorrow."

TONY KANAAN (#11 Team 7-Eleven/ Nestle Pure Life): "It's good to be back here in Toronto. We were pretty happy with the Nestle Pure Life car in both sessions today, but its Friday and we are still looking for a couple of changes before tomorrow. I think we're on the right track for the weekend."

MARCO ANDRETTI (#26 NYSE/iShares ): "I really enjoy the circuit here so far. I think we're doing a good job chipping away at it and learning what we need to be strong. We were hoping the track would come naturally to us, but it's a challenging track. It's difficult to tell where the #26 car really stands right now since we never got a clear lap after we made some setup changes. I'm looking forward to tomorrow, for sure."

HIDEKI MUTOH (#27 Formula Dream): "Today has been tough day for the Formula Dream team. We couldn't find the grip I needed. We made some setup changes throughout the day but we couldn't find anything that was spot on. We will look at everything tonight and hopefully we will be better off come tomorrow."

MARIO MORAES (#5 1800Tequila/Votarantim/KV Racing Technology): "For my first time on the Toronto track I think the KV Racing Technology team had a good day. I learned a lot about the track and the car felt good. Unfortunately, I had some back luck at the end of the session. We had just put on new tires and I was going to go out and try and put a fast lap together, but the yellow flag came out. We have another practice tomorrow and I think after that we will be ready to have a good qualifying session."

PAUL TRACY (#15 Ontario Honda Dealers – woundedwarrior.ca): "The Ontario Honda Dealers – WoundedWarriors.ca team had a good test day today. We had a very good morning practice. We were in the top-five most of the session and the car felt really good. It was nice to be back on a track that I know and racing in front of my hometown fans. In the afternoon we tried a few things for the race setup that didn't work for the car, so we lost our way a little bit. But that was what the practice session was for. We have another practice tomorrow morning to get ready for qualifying and I am confident that we can be back in the top-five."

GRAHAM RAHAL (No. 02 McDonald's Racing Team): "We're not quite there which is disappointing and frustrating because we should be. Somehow we had the wrong third gear which hurt our performance; particularly under braking so we lost a couple tenths (of a second) just in that. The McDonald's team will be okay but we've got some work to do. The thing that worries me is that the car feels very numb to any of the changes we made."